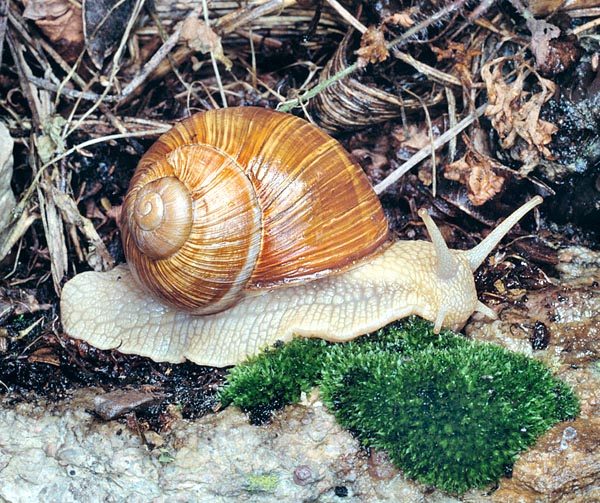 The Helix pomatia Linnaeus, 1758, known under the common names of “orchards’ snail”, “vineyard snail”, “Roman snail” or “Burgundy snail” (the famous “escargot de Bourgogne”) is probably one of the most known species of terrestrial molluscs, because very common locally as well as because bred and utilized for edible purposes since several centuries.

The name of the genus comes from the Latin “helix” = elica, helix, due to the spiral winding of its shell, typical to most of the gastropods (class Gastropoda); il nome specifico, invece, dal greco “poma” (πῶμα) = cover, with regard to the habit of the animal to close the opening of the shell with a temporary operculum (epiphragm) during the hibernation, or for defending itself from the excessive heat (aestivation). Helix pomatia belongs to the family of the Helicidae, one of the most evolved and richest in species among the terrestrial molluscs; furthermore, they are equipped with a very big shell.

The Helix pomatia is a species indigenous to central and south-eastern Europe, later on introduced by the man in good part of the old continent, in Asia and in Americas. The genus Helix counts 25 different species in Europe, some of them with ampler distribution, such as Helix lucorum Linnaeus, 1758 and Helix cincta Muller 1774; others with more reduced distribution, such as, for instance, Helix delpretiana Paulucci 1878 and Helix mileti Kobelt 1906, endemic to central Apennines, Helix ligata O.F. Muller 1774 endemic to central-southern Italy, Helix albescens Rossmassler 1839 endemic to Ukraine, Helix melanostoma Draparnaud 1801 endemic to France and Helix vulgaris Rossmassler 1839, present only in Bulgaria. 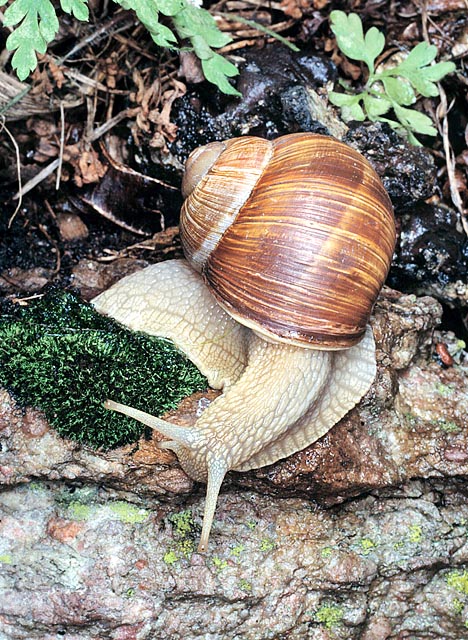 The Helix pomatia is mainly found while adhering to calcareous formations; it frequents the vineyards, the woods, the hedges, the cultivated areas and the uncultivated ones. Normally, it lives up to 1.500 metres of altitude but it can occasionally reach even the 2.000 metres.

Rather big to big shell, typically globose, with depressed to elevated whorl and more or less ample to elongated last turn, due to the huge variability of the ratio between height and diameter. The dimensions can vary from 39 to 43 mm of height and 38 to 43 mm of diameter.

Pale brown or yellowish brown background colour; on the contrary, the periostracum is tawny or brownish, with darker, more or less evident, whorls (5 at most).

The umbilical aperture is almost always visible and is only partially covered by the columellar flap of the peristome. The callosity of the columellar edge is tenuous and pellucid; that of the labial border is usually little thick and with pale brown or whitish colouration.

Hermaphrodite genital apparatus having a remarkable importance from the diagnostic point of view: in particular, for a correct determination of each species, is particularly important the diverticulum of the copulatory sac, which may be short, long or absent.

As the genus Helix includes species considered among the most evolved in the pulmonate gastropods, also the genital apparatus results very complex and perfected.

The penis is short, equipped with epiphallus and a long flagellum. The dart sac is very voluminous; the dart is composed by a grooved crown and by an elongated body, slightly curved, equipped with four symmetrical longitudinal crests. The copulatory sac channel is very long and has no diverticulum. Mucous glands with numerous ramifications and are well developed. The mandible is moderately arcuate and is composed by sub-parallel vertical small ribs (5-7 main, often intercalated by secondary bigger ribs) more or less protrudent. The radula, composed by more than 40.000 denticles, does not differ from that of other species belonging to the same subgenus. 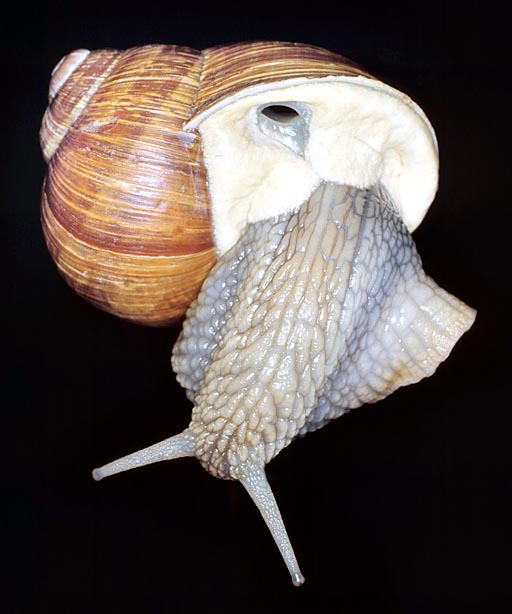 These molluscs may live for some years; they are active from spring to autumn (the activity period, however, may be more or less long depending on the geographical area), whilst they spend the winter in hibernation.

This period is preceded by a fasting period, during which the animal withdraws into the shell and expels any food residues; finally, it builds up an operculum, necessary to cover the opening of the shell, made by a thick layer of solidified mucus (epiphragm).

Like all helicids, Helix pomatia, is an herbivorous species and nourishes of a great number of different herbaceous plants.

Being a pulmonate gastropod mollusc, also Helix pomatia is an insufficient hermaphroditic species: this means that each individual has the masculine reproductive organs as well as the feminine ones, but is unable to self-fecundate.

In this species the sexual maturity is usually achieved during the third year of age. The mating is preceded by a complex courting ritual which may even last many hours (about 20-25).

This begins with the meeting of two mature specimens, keen to coupling: the molluscs reciprocally touch each other with the tentacles, they bite, they position themselves foot to foot, raising the fore part of the body, unite and divide repeatedly.

One of the most interesting stages is represented by the emission and the launch, towards the partner, of a small mineralized dart, 5-9 mm long (usually, it sticks into the flesh of the foot). One of the most likely explanations the specialists have given to this behaviour is that it is useful for testing the partner: if this is seriously motivated in carrying out the coupling, the two specimens will overcome the “test” of the dart; if, conversely, they are little motivated, they will leave the companion and the mating will not be completed. 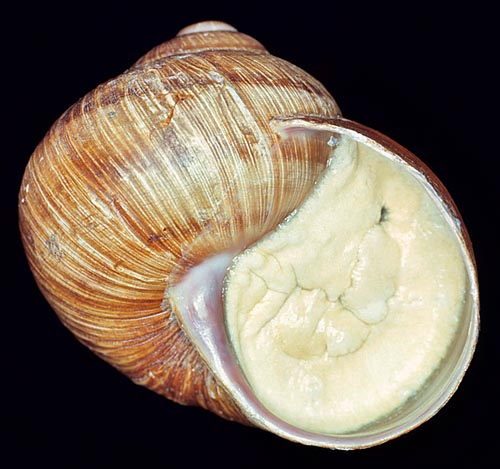 In fact, we have not to forget that, during the long time dedicated to the intercourse, the two specimens are particularly vulnerable and may be an easy prey for their foes.
The hatching (about 35-50 eggs of the diameter of 4-5 mm) usually takes place in spring; few of them are intended to disclose, due to the variations of the habitat conditions and to the predators; not rarely, however, these molluscs effect two or more spawn during the favourable season.

The genus Helix includes the biggest terrestrial molluscs in the European continent and also the edible non marine species most appreciated for the sapidity and the high nutritional value of their fleshes; for these reasons, the rational snail farming (heliciculture) started already in Roman times.