Heloderma exasperatum is diffused in Mexico in the states of Sinaloa and Sonora, where it occupies the territory of the river basins of the Rio Fuerte and of the Rio Mayo. Morphologically it distinguishes from the other three species for the more intensely coloured livery, where the areas characterized by various shades of yellow often prevail on the brown or black ones.

Heloderma horridum, is present in Mexico, in the states of Sinaloa and Oaxaca, from the sea level up to 1500 m of altitude. Among the four species it is the most common one and is the one presenting a livery of more variable colouration, from almost completely black or with more or less spread spots of yellowish colour. Its range is partially overlapped with that of the Heloderma alvarezi, with which it seems to be producing hybrids. 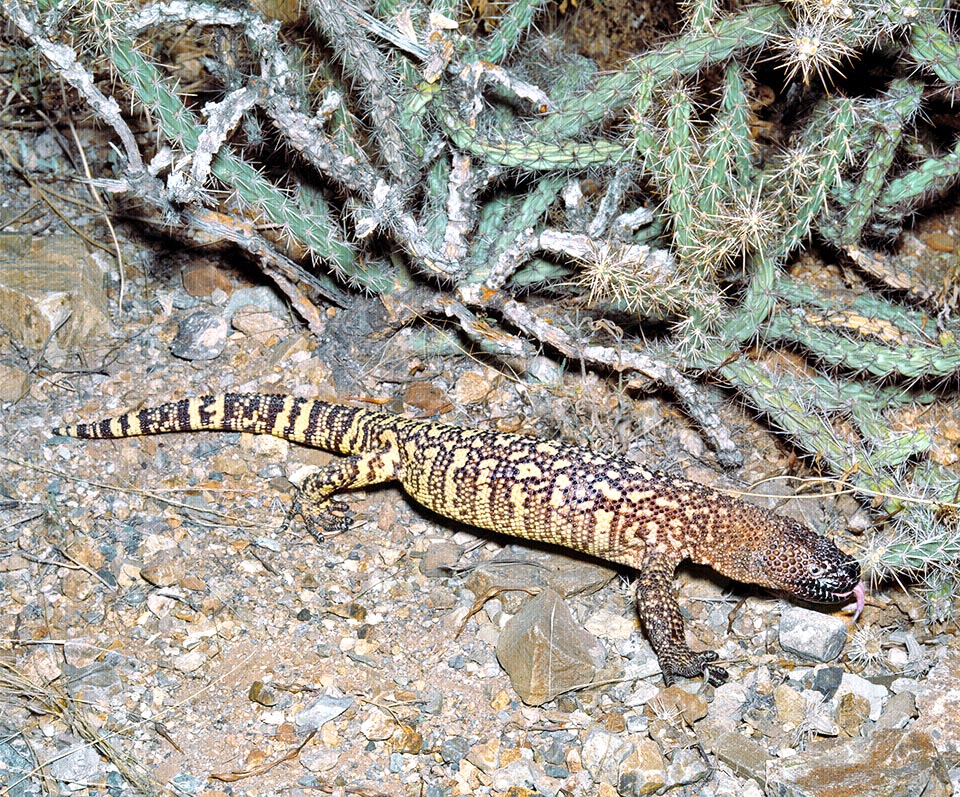 The Heloderma exasperatum, diffused in Mexico in the states of Sinaloa and Sonora, where occupies the territory of the river basins of the Rio Fuerte and Rio Mayo, differs from the other three species, yore known as Heloderma horridum, for the more intensely coloured livery where the yellow areas often prevail on the brown or black ones © Giuseppe Mazza

Heloderma alvarezi is one of the least known species. It occupies the valley of the Rio Grijalva in the central Chiapas and the depression of the Rio Lagartero in Guatemala. At birth this Heloderma has a series of extended yellow and orange spots, that tend to disappear while growing, until when in the adults the prevailing colour is black or dark brown.

Heloderma charlesbogerti, honoured to the herpetologist Charles Bogert is the rarest species, present essentially in the valley of Motagua in Guatemala, and its colour is mainly black with yellow or whitish spots in the rear part of the body and evident bands on the tail.

The evolutive history of the Heloderma has been recently well described. Based on the comparison of the DNA, both nuclear and mitochondrial, Heloderma suspectum is neatly separate from the other four species: H. horridum, H. exasperatum, H. charlesbogerti and H. alvarezi, that in turn confirm clearly differentiable between them, whilst the separation of the two subspecies of H. suspectum remains not well defined at molecular level.

With the exception of H. charlesbogerti, whose range is neatle separated and southernmost, the ranges of the other three species are partly overlapped. 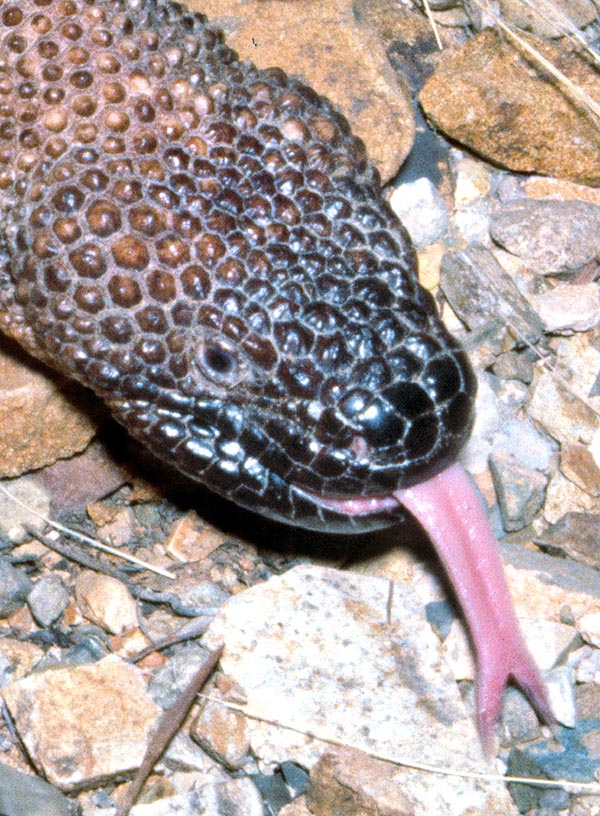 Close-up of the head with the osteoderms merged to the cranial bones. As in the Heloderma suspectum the biforked tongue, here much clearer with pink hues, besides for nourishing and drinking, serves to transport with the saliva the odorous molecules to the Jacobson olfactory organ placed on the vault of the palate © Giuseppe Mazza

Heloderma horridum and Heloderma exasperatum, the two most common species are often present in the zoos and kept at home as pets. For this reason, they are the best known species and are object of most of the studies on the behaviour, on the reproduction and on the venom.

Heloderma exasperatum has the look of a big and squat lezard, that may reach a total length between 60 and 90 cm with a weight up to 4 kg.The males are slightly bigger and heavier than the females. The body is cylindrical, the head wide and flat.

The skin is covered by small scales not imbricate, under which, especially on the back, are present some dermic bones, the osteoderms, that in the region of the head are merged to the cranial bones.

The presence of the osteoderms confers the skin the typical coarse look that stands at the origin of the Latin name Heloderma, coming from the Greek helos (ἧλος) “nail or wart” and derma (δέρμα) “skin” and also of the common English name “beaded lizard”.

The specific name exasperatum comes from the Latin “exaspero” = “I make rough” in turn coming from “asper” = “rough, harsh” and from the prefix ex, that adds extensive or intensive value. Hence, exasperatum means “completely rough”.

The general morphological characteristics and the ecology of the species are similar to those of Heloderma suspectum, to which please refer.

The sexual maturity is reached when two ot three years old. The reproductive season stands usually between February and March, the mating lasts 30 to 60 minutes. After two months the female lays 3-13 elongated eggs and buries them at the depth of about 10 cm. After an incubation lasting 160 to 210 days the newborns begin to get out from the eggs. In two or three days once reabsorbed completely the sac of the yolk and ingested the liquid contents of the egg, they are completely free. Upon birth the weight is of about 40 g.

The length of the life seems to be around the 30 years, but specimens in captivity have lived even longer.

A behavioural character distinguishing Heloderma exasperatum from Heloderma suspectum concerns the modalities of the fights between males for the possession of the female.

In captivity, as well as, more rarily, in liberty, the fights between males have been observed and faithfully described. The fights consist in a series of “rounds” that may totally last some hours. In each “round” the contenders, like in a wrestling match, cling tightly bending to form an arc where only the heads and the tails keep in contact with the soil, till when the winner is able to overturn and to crush on the ground the opponent, overhanging it. During the fight the contenders exchange bites on the neck, on the head and on the lips. At the end the winner, superior for force and endurance, remains master of the field (and of the female), whilst the loser goes away.

The observed fights in these species are quite different from those of Heloderma suspectum, where prevail the movements of lifting of the head and of twisting of the back, with occasional bites, but are very rare the showy buckling of the body.

As in the case of the other Heloderma, the bite of the Heloderma exasperatum is venomous due to the presence in the saliva of numerous strong toxins. Please refer to the text on Heloderma suspectum for a deeper treating about the toxicity and the mechanism of inoculation of the venom, hinting here only some comparative aspects. 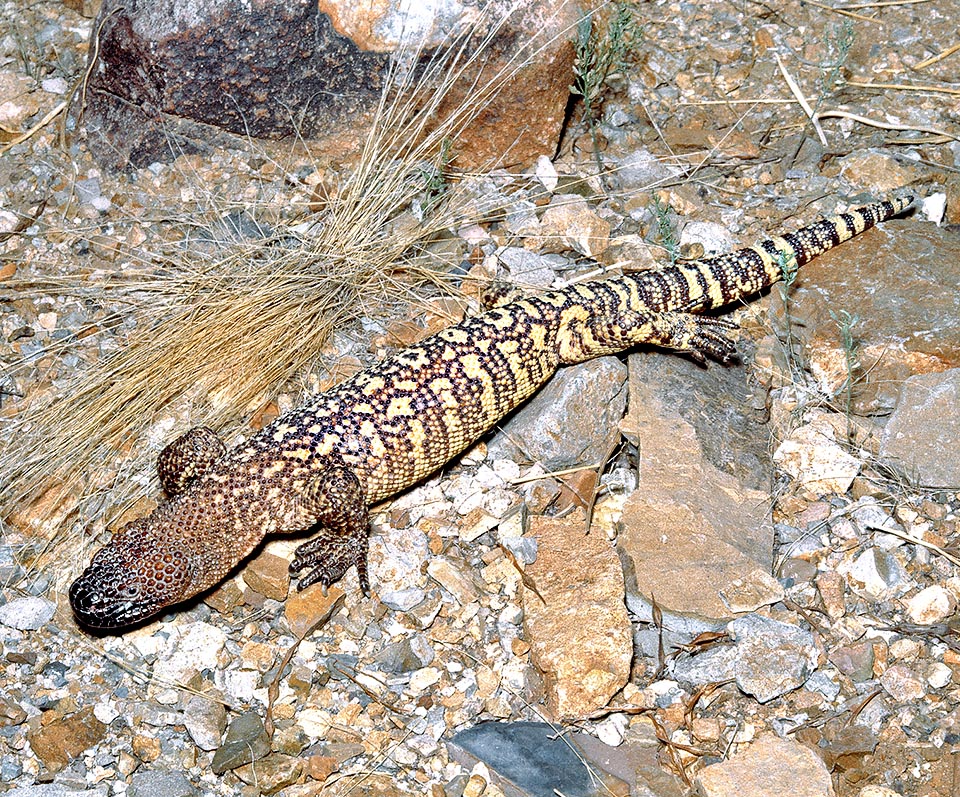 In nature the Heloderma exasperatum nourishes only a few times per year, of eggs, nestlings and small vertebrates. Its venom has a mainly deterrent function © G. Mazza

Even if the divergence between H. suspectum and the other species of Heloderma dates, as we have seen, to many millions of years ago, the comparison between the toxins present in their saliva reveals a surprising resemblance, probably as a consequence of a very similar selective push for what concerns the typology of the preys and of the predators with whom these reptiles confront. In fact, all these species, typical to the south-western regions of North America, occupy habitats of rocky semi-arid thicket with a relatively homeogeneous fauna and this reflects on their morphology extremely similar as well as on the physiological adaptations.

Among the toxins evidenced for the first time in a Heloderma of the group horridum (the study precedes the subdivision in four species and does not indicate the subspecies utilized) we remember the Horridum toxin that appears to be the only toxin with hemorrhagic effects of the helodermatids. It is a toxin potentially lethal for the animals, similar to the gilatoxin, with effects kallikrein-like, that causes strong pain, oedema, inflammation, hypotension but especially bleedings in the internal organs and in the eye, with consequent exophthalmos.

Another very toxic substance, called generically “lethal toxin” with no other denominations has been discovered for the first time in Heloderma horridum (but probably present in the other species of Heloderma). It is probably the most lethal substance produced by these reptiles and has the property of inhibiting the contraction of the diaphgram muscle and consequently the breathing.

The rôle of the venom in the ecology of the Heloderma is object of discussion, seen that some scholars consider paradoxical the fact that these reptiles, after having bitten, maintain the jaws tightened remaining tenaciously attached to the victim. If the venom had only a defensive function, as many affirm, with this behaviour the animal should remain long time exposed to the reactions of the aggressor, risking to be seriously injured or even killed. Actually, this objection presents the conceptual error of considering that the natural selection acts exclusively at level of the single individual. 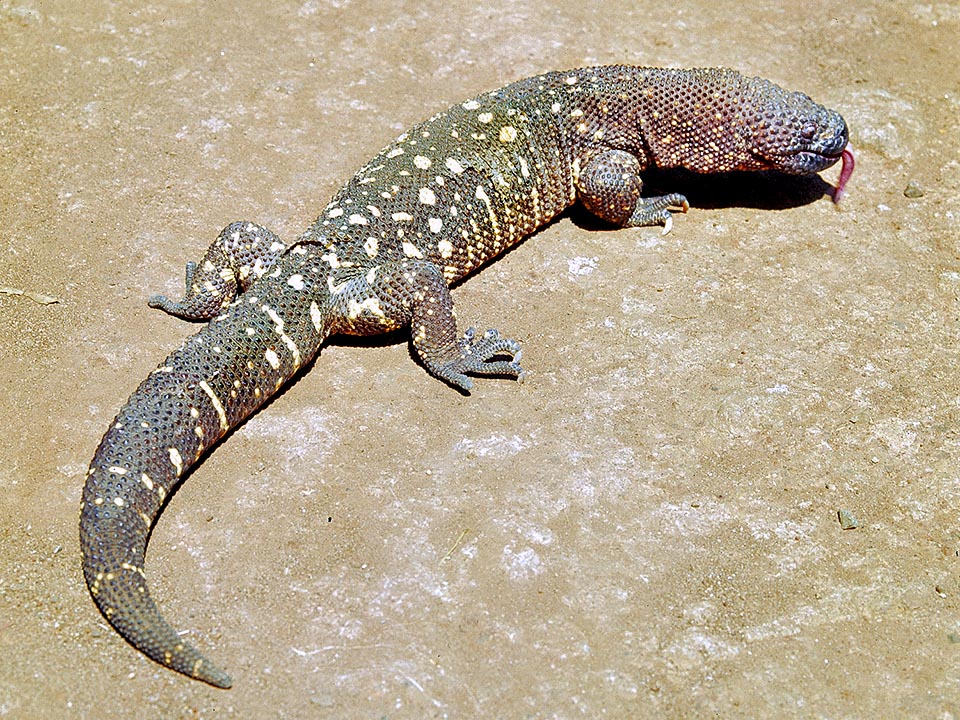 Heloderma exasperatum in captivity while moulting. In the zoos often becomes obese storing fat in the tail that in nature is a reserve organ © Giuseppe Mazza

In reality, since that the selection acts at level of the gene, the death of a single individual does not preclude that the tenacity of the poisoned bite, very painful, is advantageous evolutively, seen that the experience of an encounter with a Heloderma will remain unforgettable for the predator, who for the future will avoid this type of preys.

Indeed, however, the pharmacological characteristics of the venom of the Heloderma that display the presence of lethal components active at many levels, are compatible with a rôle not only defensive but also offensive in the predation. As in the case of Heloderma suspectum the bite of Heloderma exasperatum is potentially lethal for small animals but for the man, despite the large size of the reptile, usually the consequences are not too serious, especially if the bite occurs in the hands.

Recent reports about the effects of the bite describe the onset of very strong and lasting pain and of swelling that, starting from the bitten part, soon spreads all over the limb. In some cases, appear dizziness, sweating, vomiting and high hypotension. Usually, as consequence of a support therapy, the symptoms disappear in a few days.

The custom recently established of keeping at home some Heloderma as pet may appear odd, seen the dangerousness of the bite of these animlals, and their not very lively behaviour, but we have not to forget that the Emperor Tiberius, about two thousand years ago, appears having had as pet a Komodo dragon!

The Heloderma, who at the natural status nourishes only few times per year, when in captivity, with abundance of food available, tends to over eating and often becomes obese.