The species is native to Cuba where it is present with few specimens on rocky hill slopes in the province of Villa Clara.

The Hemithrinax ekmaniana Burret (1929) is an unarmed species with solitary stem, erect, of about 5 cm of diameter, up to about 4 m tall, covered, above, by the persistent dead leaves for long time.
The leaves, on an extremely short petiole, not more than 10 cm of length, and with few fibres of the foliar bases of pale brown colour, are palmate, almost circular, subdivided in about 30 coriaceous segments, rigid, waxy, with just bifid pointed apex, long in the central part up to about 45 cm and united at the base for about 1/3 of their length, intense green above, blue grey below, and form a particularly compact spherical top. 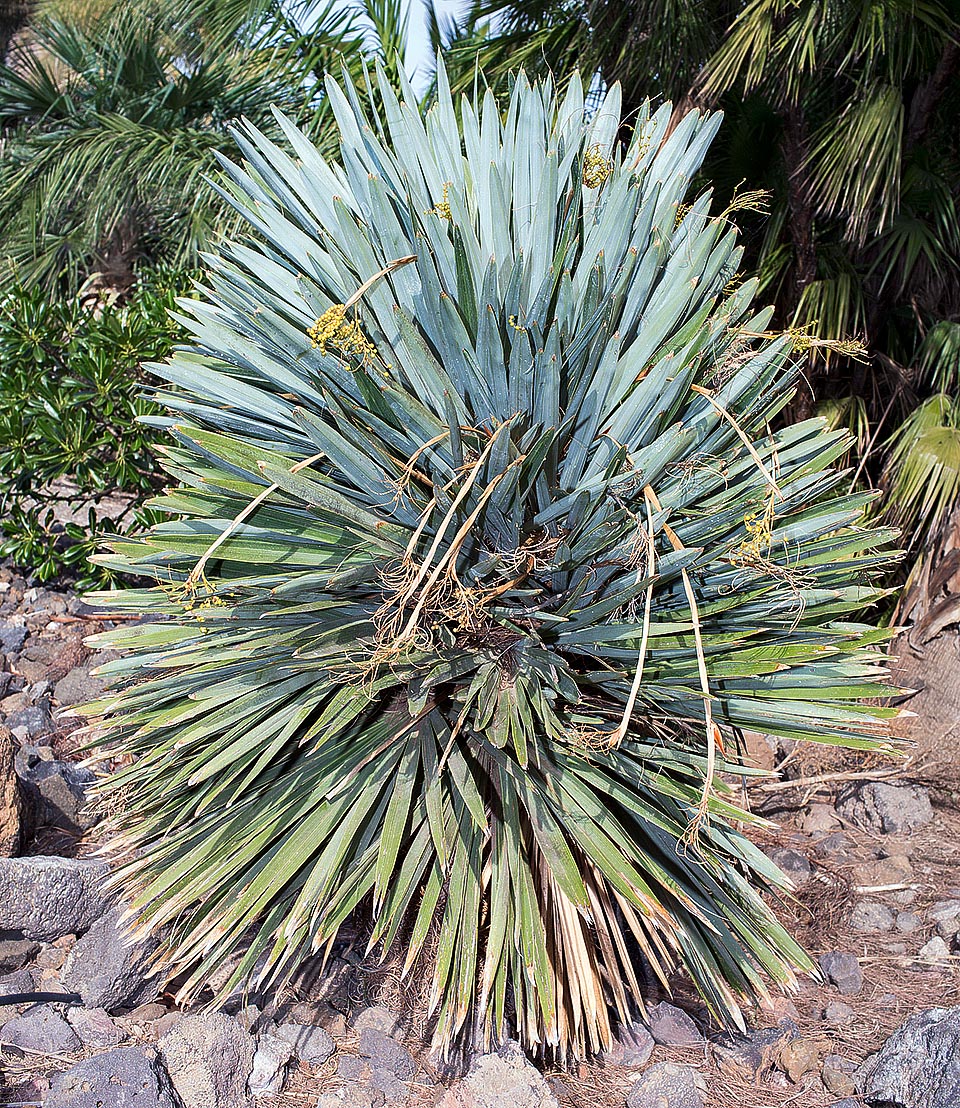 The inflorescences generate between the leaves, which slightly exceed in length, are ramified at the apex and carry whitish hermaphrodite flowers; the fruits are globose drupes of pale yellow colour, of about 0,8 cm of diameter, containing one seed only.

Species rare in the wild, presently (2013) reduced to about a hundred of adult specimens which grow in a restricted and isolated area in the central part of the island, close to the city of Sagua La Grande, on typical rocky formations with steep slopes, calcareous, called “mogotes de Jamagua”, presenting a high concentration of flora and fauna and numerous endemism and for such reason declared protected area by the Cuban authorities.

Remained unknown for many decades, after having been discovered and described, due to the inaccessibility of the places where it lives, it has been “rediscovered” in 1976, but still today few young specimens are present outside the origin area in some botanic garden or at some collectors.

Inflorescence with backlit leaves and fruits. It's a very rare species with only a hundred plants in the wild © Giuseppe Mazza

The palm grows on the porous rock with very little organic substance available where to root, in presence of high atmospheric humidity. Of great ornamental effect, due to its contained dimensions it is also suitable for gardens of limited extent, on well draining soils, calcareous and in full sun, where it may set up a focal point; it also has a good resistance to the marine aerosols, therefore can be employed close to the sea. Right now there is no information about plants cultivated in the open outside the tropical and subtropical climate zones, it therefore appears that the possibilities of cultivation in the open of the species are limited only to the above climates, it is in any case cultivable successfully in pot for many years, seen its slow growth, thus permitting to shelter it during the colder months.

The species is inserted in the red list of the IUCN (International Union for the Conservation of Nature and Natural Resources) as “Critically Endangered” (at extremely high risk of extinction in the wild in the forthcoming future).