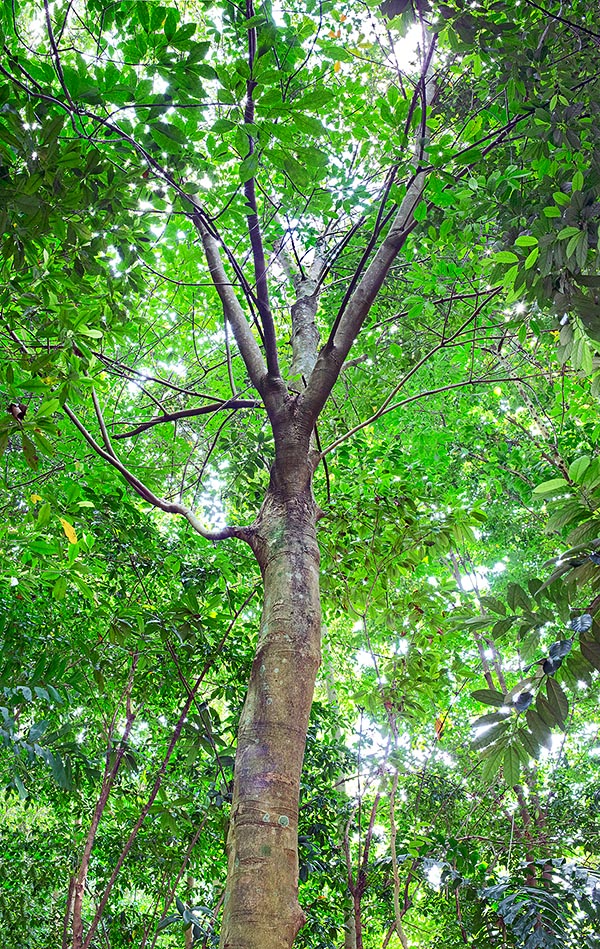 The species is native to Bolivia, Brazil, Colombia, French Guyana, Peru and Venezuela where it grows in the pluvial Amazonia forest, on mainly clayey soils, up to about 600 m of altitude.

The name of the genus comes from “heve”, term with which the Amazonia natives call the tree; the Latin name of the species “brasiliensis” = of Brazil, indicates one of its origin locations.

The Hevea brasiliensis (Willd. ex A.Juss.) Müll.Arg. (1865) is a much ramified deciduous tree that in nature may reach the 25-40 m of height with cylindrical trunk up to more then 1 m of diameter, with smooth and greyish bark.

The root system is formed by one taproot, which already when 2-3 years old can reach a depth of 2 m, and by an ample superficial system of lateral roots.

The leaves, spirally arranged on a 15-25 cm long petiole, are trifoliate with leaflets from elliptic-lanceolate to obovate long pointed, with entire margin, 5-18 cm long and 2-8 cm broad, coriaceous, dark green above, paler below, with 2-3 glands at the base; the young leaves are bronzy.

The inflorescences are pubescent panicles at the axilla of the young branches leaves, 15-20 cm long, with unisexual flowers emanating a penetrating odour, the female ones, of 5-5,5 mm of diameter and of 5-7 mm of length, are placed at the extremity of the central axis and of the main lateral ramifications, the male ones, of 4,5-5 mm of diameter and 4,5-6 mm of length, far more numerous (with a ratio of about 70:1), on the rest of the inflorescence.

The flowers, typical of Euphorbiaceae, have no petals, are greenish yellow with calyx having five triangular lobes; the female flowers are formed by one tricarpellar ovary with three white sessile stigmata, the male ones have ten stamina in two verticils of five each on a staminal column. The pollination, mainly crossed, is anemophilous and entomophilous. The fruits are trilobate capsules of 3-5 cm of diameter, dehiscent in explosive way, containing 3 ellipsoidal seeds, 2-4 cm long, glossy, of greyish colour with dark brown spots, which are thrown far away, even to 20 m.

It reproduces by seed, which has a short-lasting germinability, some weeks if duly conserved, with germination times of 1-3 weeks and first blooming after 5-7 years, by micropropagation, but usually by grafting in order to maintain the varietal characteristics. Are utilized one year or, more frequently, 3-5 months old, rootstocks obtained from seed, which have a better percentage of success, with scion having the same age of the stock. 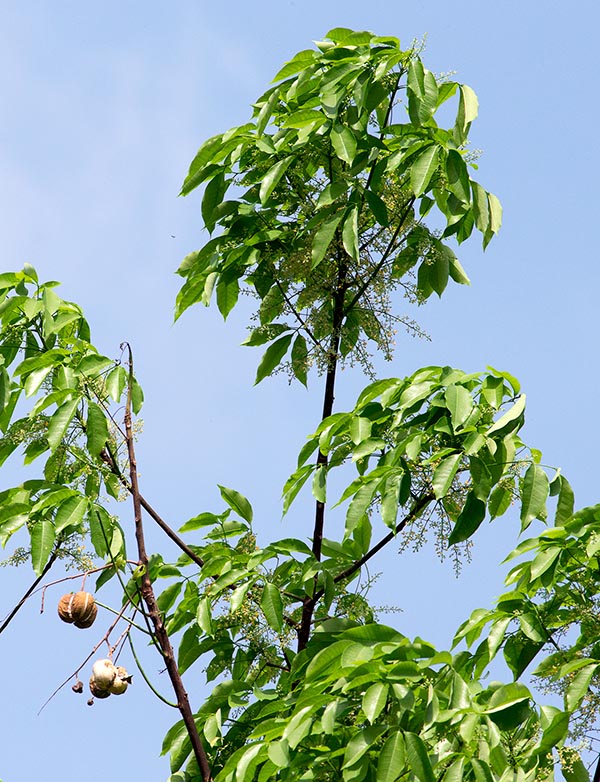 The plant is ready to start the production between the 5 and 10 years of age, when the trunk has reached the diameter of at least 16-18 cm.

Markedly tropical species, it requires a high annual rainfall, 1600-4000 mm, well distributed, high atmospheric humidity and temperatures between 25 and 35 °C, with lowest ones not under the 15 °C, deep soils, draining, acidic and a sunny exposition and little windy.

The cultivation of Hevea brasiliensis for the commercial production of the rubber began by the end of the ‘800 in Asia, where still now are the most extended plantations, in particular in Indonesia, Thailand and Malaysia, compared to many other species from which it can be obtained, this is by far the most cultivated due to the high yield, the easy cultivation, the rate of growth and above all, the high quality of the product.

The harvest of the latex is done during the first hours of the morning, when the flow is maximum, with a process called “tapping” consisting in doing in the bark, generally at half of the circumference of the trunk, a series of incisions with a special knife, from top to bottom and left to right, with an inclination of about 25-30° in respect to the horizontal, thus to intercept orthogonally the lactiferous channels, at whose base is placed a drip pan connected to a collecting cup.

For each tree, and per year are done up to about 150 incisions at regular intervals, usually at alternate days, seen the latex stops to get out from the incision after some hours due to the occlusion of the channels due to its coagulation; the depth of the cut must be such to not affect the cambium, in order to allow the regeneration of the bark in 5-7 years.

The latex, of white colour, is a colloidal suspension, for the 30-40%, of rubber particles (chemically cis-1,4 poly-isoprene) of negative charge in watery matrix (serum) containing other substances (lipids, proteins, mineral salts, etc.). The first stage of the rubber processing is the coagulation which may be triggered in various ways, by lowering the pH, from 6,5-7 up to a value between 4 and 5, by adding an acid, which is the method by far more applied, by adding electrolytes, such as calcium chloride and aluminium sulphate, that neutralize the negative charges of the particles allowing the coagulation, by mechanical agitation, imparting to the particles enough kinetic energy for overcoming the electrostatic repulsion. The coagulated rubber is then sent to the following phase of pressing between the rollers to remove the water and the reduction in sheets. 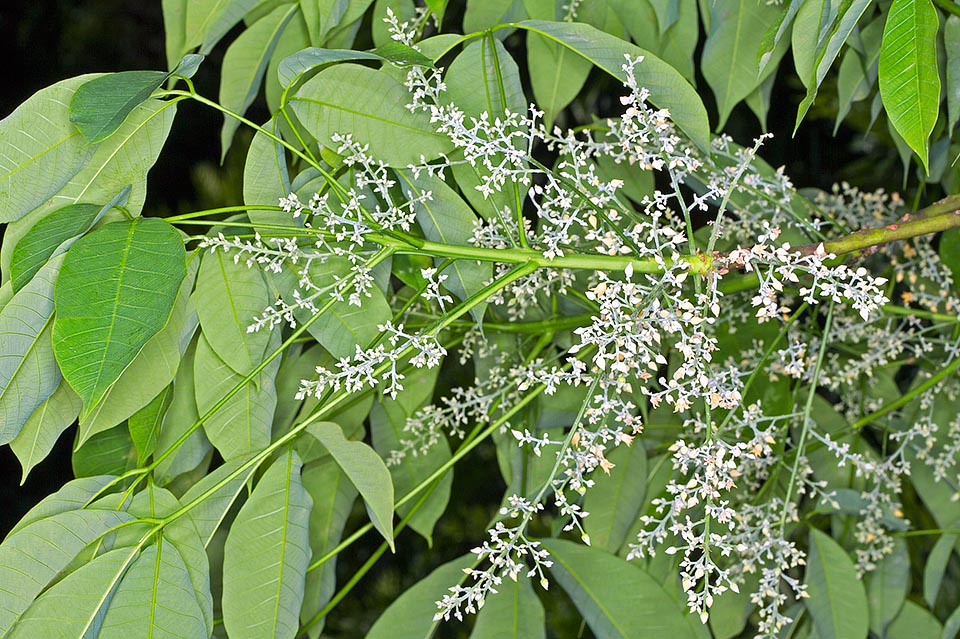 The inflorescences, 15-20 cm long, are panicles which emerge over young branches at leaf axils. The unisexual flowers boast a penetrant odour © Giuseppe Mazza

The so obtained product has, thanks to its molecular properties, high characteristics of elasticity, plasticity, durability, resistance, insolubility in the water and electrical insulation greater than those of the synthetic rubber. The negative characteristics are the thermoplasticity (it hardens at the low temperatures and softens at the high ones), the scarce resistance to the solvents and the risk of allergic reactions by contact in sensible individuals.

Known already in Pre-Columbian era to the native populations of America, who used it for fabricating various objects and also for waterproofing clothes and footwear, between the end of ‘700 and the first half of the ‘800 sprang up in Europe and in USA various industries utilizing the rubber obtained from the Hevea brasiliensis, but after the initial interest, due to the aforementioned negative characteristics, the consumers confidence fell dramatically. 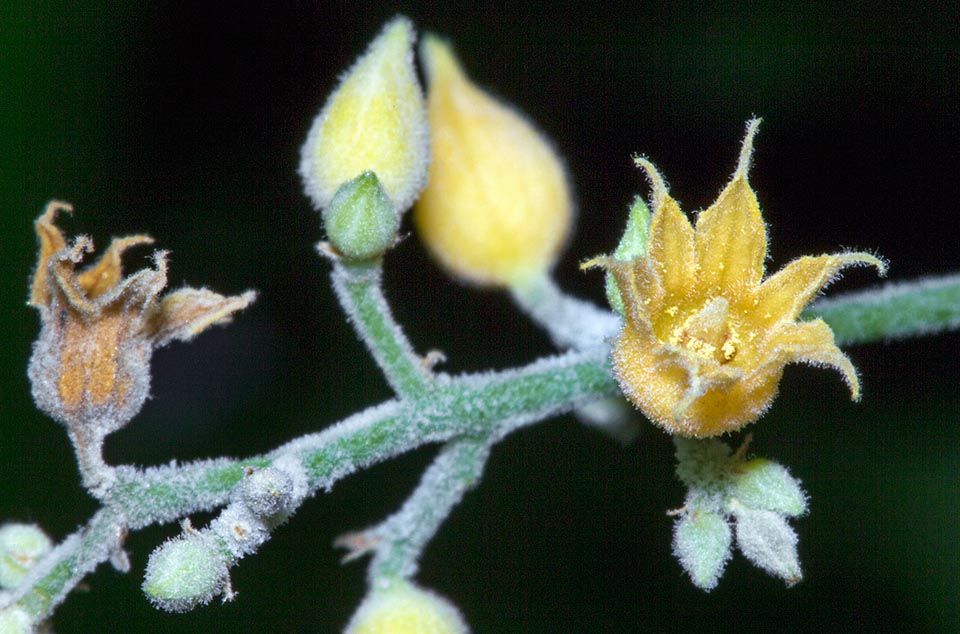 Zoom of a minute female flower on the right. The pollination, prevalently crossed, is anemophilous and entomophilous © Giuseppe Mazza

The turning point came with the process realized by the American Charles Goodyear (1800-1860), known as “vulcanization”, who in 1839 casually discovered that by blending in hot sulphur to the rubber its characteristics were remarkably improved, conferring hardness, greater elasticity and minor plasticity, resistance to the high temperatures, to the abrasions, to the crashes and to the solvents, this thanks to the forming of transversal links (reticulations) between the molecules of poly-isoprene. The natural rubber is nowadays of great strategic and commercial importance, employed for thousands of products, including countless medical instruments, besides for the fabrication of tyres which absorbs about the 60% of the whole production.

Presently (2010) about the 50% of the tyres for cars is made with vulcanized natural rubber, the other half uses synthetic rubber, and the totality of those for aircrafts, in particular due to the better resistance to the warming. 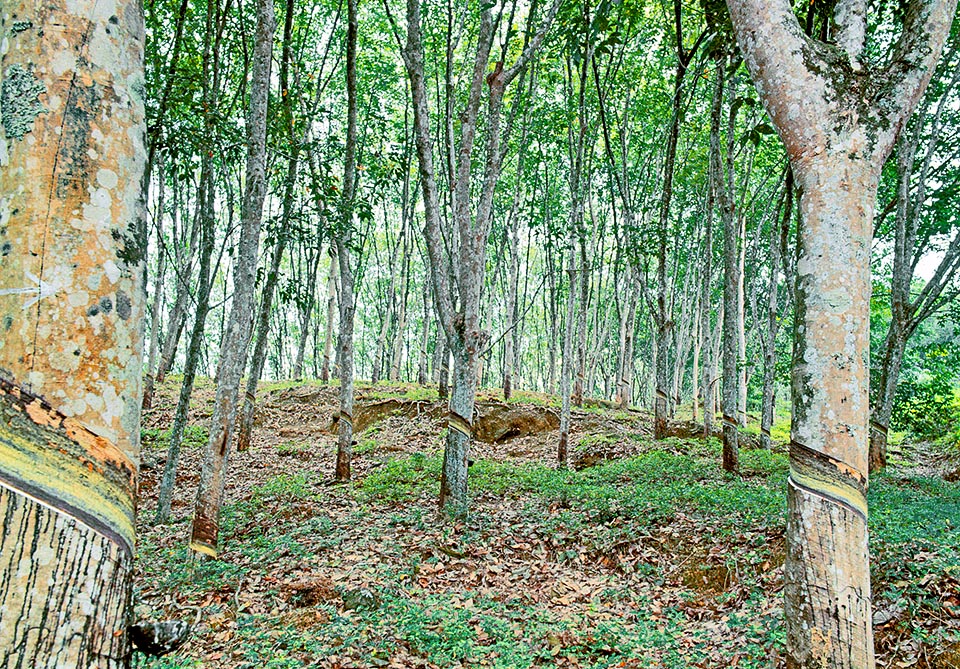 Plantation with the characteristic bark incisions which intercept the latex vessels. The wood has optimal durability, resistance and workability characteristics © G. Mazza

The wood has excellent characteristics of duration, resistance and facility of working, similar to those of the teak, and is used when the tree has reached an age of 30-35 years and is not any more productive. Finally, the seeds, poisonous, consumed in times of famine after boiling, contain about the 50% of brown yellow oil used for fabricating soaps, colours and dyes. 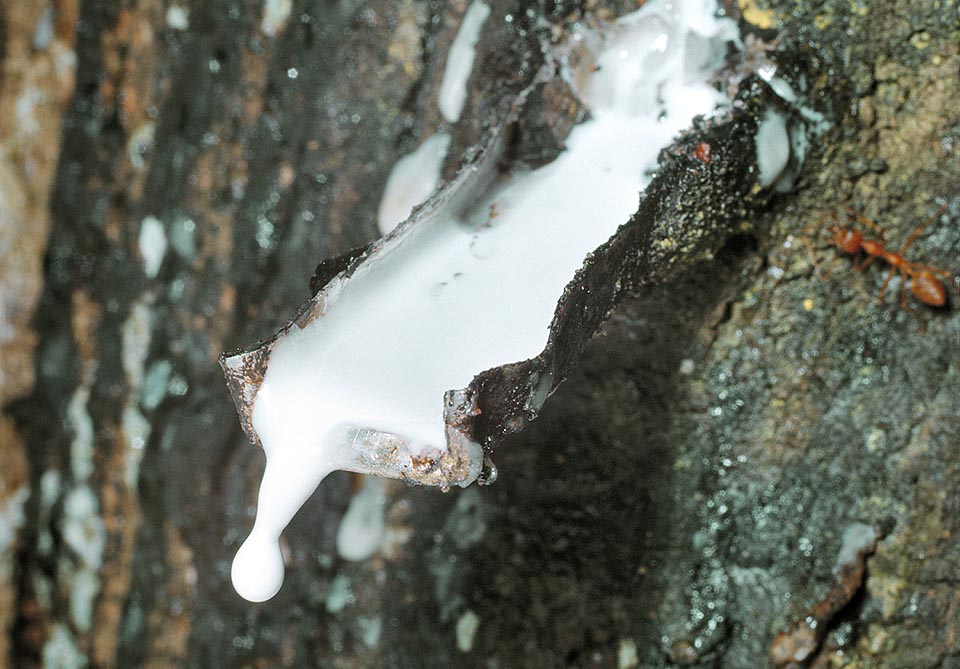 From the latex, plentiful at morning, they extract the natural rubber mainly used for tyre-making © Giuseppe Mazza