Symbol of the tropics, Hibiscus grows well in Mediterranean climates. A collection in Ceylon. Sexual life of these plants which seduce birds. 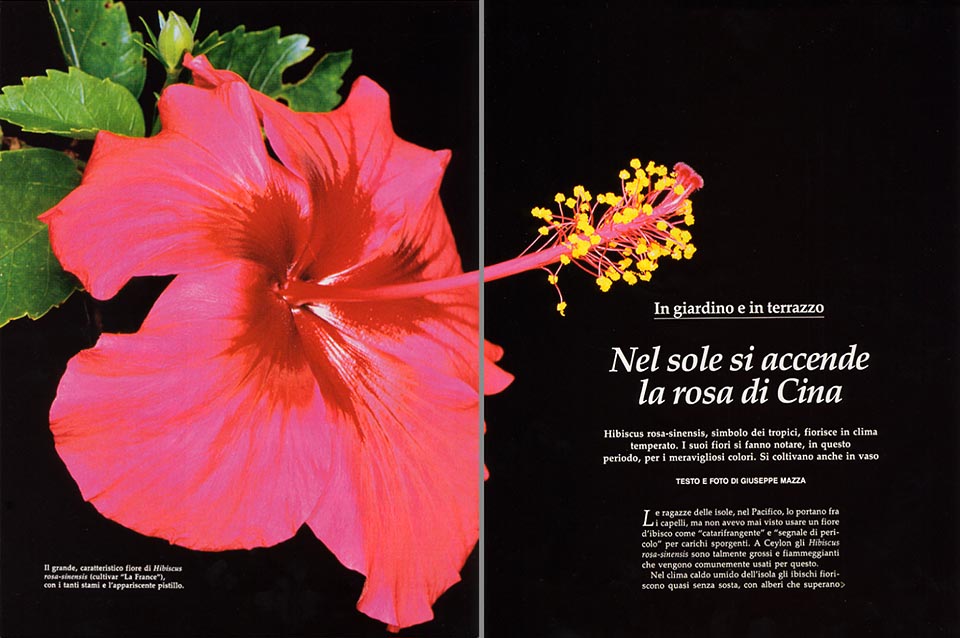 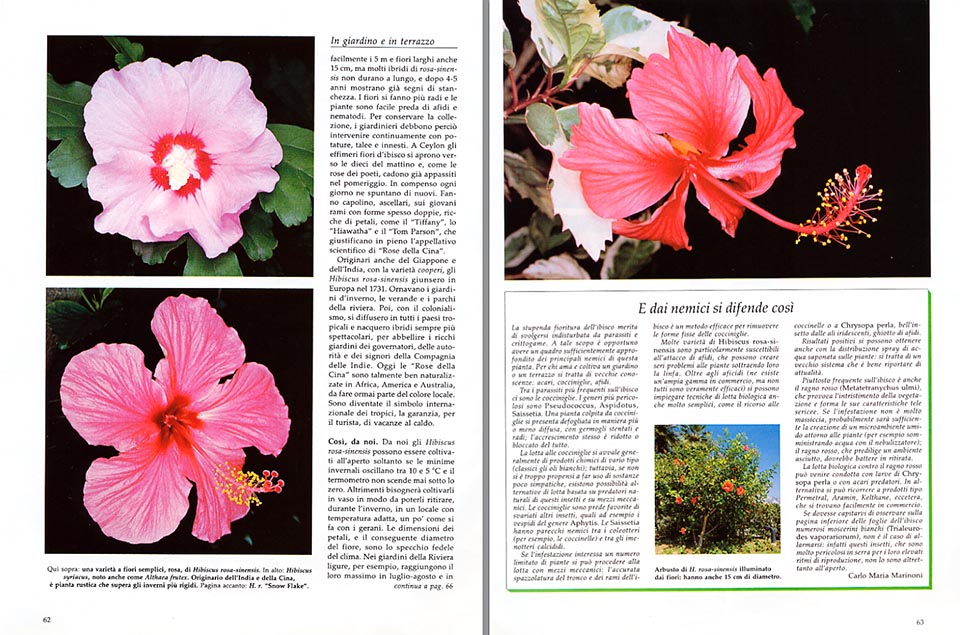 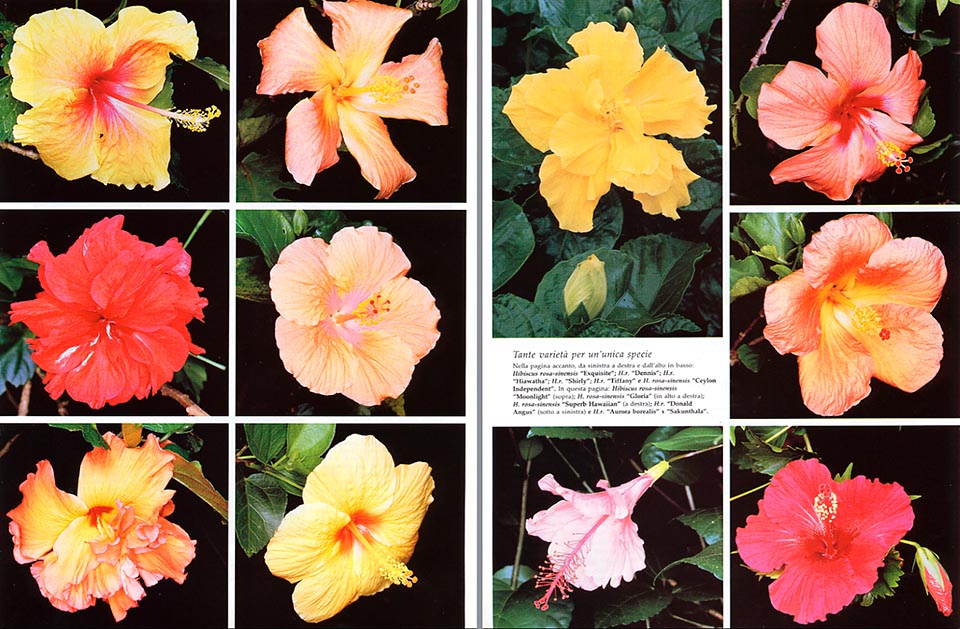 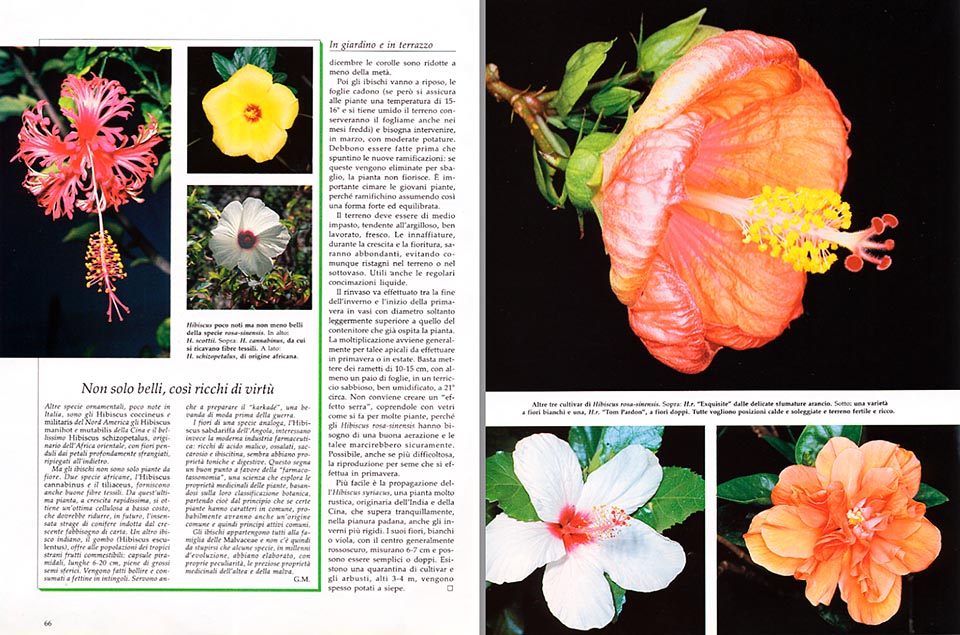 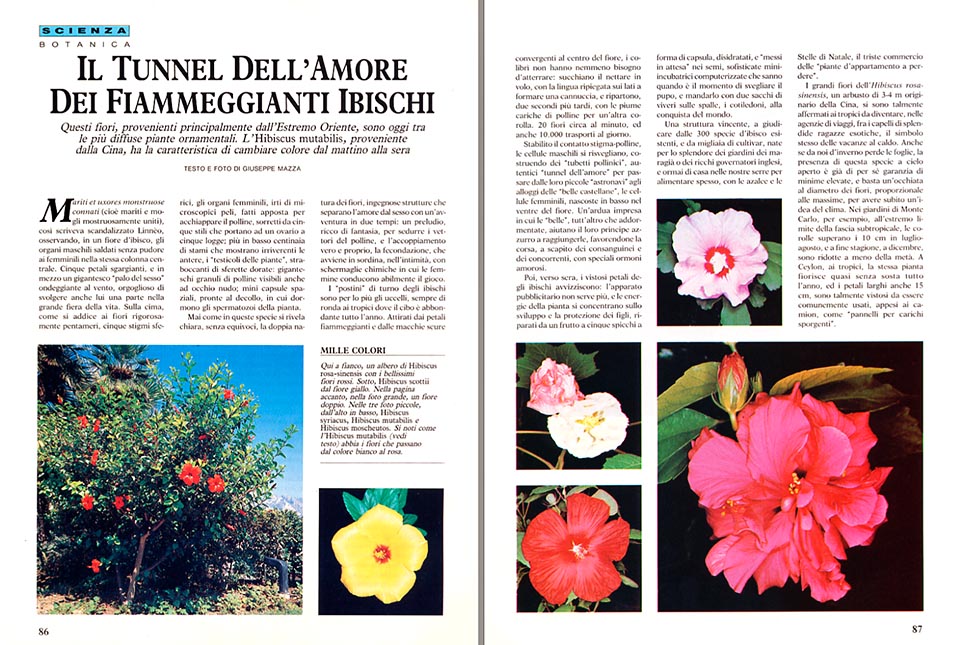 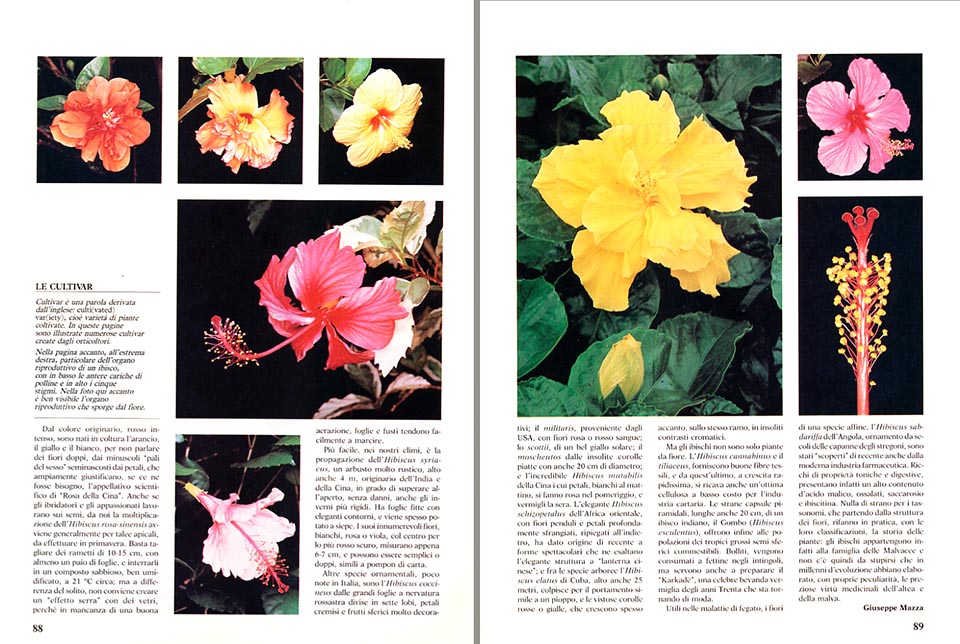 “Mariti et uxores monstruose connati”, Linnaeus was writing, while observing, in a flower of rose-mallow, the masculine organs bound, shamelessly, to the feminine ones, on the same central column.

Five showy petals, and, in the middle, a gigantic “sex pole”, waving at the wind, proud to carry out, he too, a part in the great fair of the life.

On the top, as suits to the flowers rigorously pentamerous, five spherical stigmata, the feminine organs, bristling with microscopical hair, done expressly for catching the pollen, supported by five styles carrying a five-lodges ovary; lower, hundreds of stamens which display, irreverent, the anthers, the “testicles of the plants”, overflowing of golden small spheres: gigantic granules of pollen, visible even at naked eye; mini space capsules, ready for the take-off, where the spermatozoa of the plant are sleeping.

Never as in these species, is evident, unequivocal, the double nature of the flowers, ingenious structures which separate love from sex, with an adventure in two parts: a proem, rich of fantasy, to seduce the carriers of the pollen, and the real and literal mating, the fecundation, which takes place on the sly, in the privacy, with chemical skirmishes where the females, skilfully, lead the game.

The “postmen” on duty for the rose-mallows are, mostly, the birds, always around in the Tropics, where the food is copious all the year round.

Attracted by the blazing petals and by the dark dots converging towards the centre of the flower, the humming-birds don’t even need to land down: they suck the nectar in flight, with the tongue folded on the sides, to form a funnel, and leave, two seconds later, with the feathers loaded of pollen, for another corolla, about 20 flowers per minute, and even 10.000 daily transportations.

Once established the contact stigma-pollen, the masculine cells wake up, building some “pollinic small tubes”, authentic “tunnels of love”, for transferring from their small “space ships”, to the accommodations of the “charming ladies of the castle”, the feminine cells, hidden down, in the belly of the flower.

A difficult task, where the “beauties”, not at all “sleeping”, help their Charming Prince to reach them, facilitating their journey, to the detriment of the kinsmen and of the other pretenders, with special amatory hormones.

Then, towards evening, the showy petals of the rose-mallow wither: the advertising apparatus is of no use any more, and the energies of the plant concentrate on the growth and the protection of the children, sheltered by a fruit of five segments, with the shape of a capsule, dehydrated, and “placed in waiting”, in the seeds, sophisticated computerized mini incubators, which know when it is time to wake up the tot, and to send it, with two bags of provisions on its shoulders, the cotyledons, to conquer the world.

A gaining structure, considering the 300 existing species of rose-mallow, and the thousands of cultivars, born for the splendour of the gardens of the maharajahs or of the rich English governors, and by now familiar in our greenhouses for nourishing , often, along with the Azaleas and the Christmas Stars, the dreary market of the “non returnable interior plants”.

The large flowers of the Hibiscus rosa-sinensis, a shrub, tall 3-4 metres, native of China, have made themselves so much known in the Tropics, to become, in the travel agencies, between the hair of splendid exotic girls, the symbol itself of holidays in warm locations.

Even if, in our countries, it loses the leaves in winter, the presence of this species in open air, is already, by itself, a guaranty of elevated minimum temperatures, and it is sufficient to give a glance to the diameter of the flowers, proportional to the highest ones, to have at once an idea of the climate.

In the gardens of Monte Carlo, for instance, at the extreme border of the subtropical zone, the corollas are over the 10 cm in July-August, and by the end of the season, in December, they reduce to less of a half. In Ceylon, in the Tropics, the same plant flowers, almost incessantly, all the year round, and the petals, even 15 cm wide, are so much showy, to be commonly used, hanging from the back of the lorries, as “sign boards for projecting loads”.

From the original colour, deep red, were born, in cultivation, the orange, the yellow and the white, not to talk of the double flowers, with their small “poles of the sex”, half hidden by the petals, which amply justify, should it be needed, the scientific name of “Rose of China”.

Even if the hybridizers and the lovers work on the seeds, in our countries the multiplication of the Hibiscus rosa-sinensis, happens usually by apical cuttings, to be effected in spring.

It suffices to cut some small branches of 10-15 cm, with at least a couple of leaves, and inter them in a sandy compound, well humidified, at about 21 °C; but, unlike the custom, it is better not to create a “greenhouse effect”, with some glasses, as, in absence of a good ventilation, leaves and stems tend easily to decay.

Easier, in our climates, is the spreading of the Hibiscus syriacus, a very rustic shrub, tall even 4 metres, native of India and China, able to overcome, in open air, without damages, also the most severe winters.

It has thick leaves with elegant outlines, and is often pruned as a hedge. Its countless flowers, white, pink, or violet, with the centre mostly deep red, measure just 6-7 cm, and can be simple or double, resembling to paper pompons.

Other ornamental species, not much known in Italy, are the Hibiscus coccineus, with the great leaves, with reddish nervure, divided in seven lobes, crimson petals and very decorative spherical fruits; the Hibiscus militaris, coming from USA, with pink or red-blood flowers; the Hibiscus scottii, with a nice, sunny yellow; the Hibiscus moscheutos, with unusual flat corollas with even 20 cm of diameter; and the incredible Hibiscus mutabilis of China, with petals, white in the morning, becoming pink in the afternoon, and vermilion in the evening.

The elegant Hibiscus schizopetalus of eastern Africa, with pendulous flowers and deeply frayed petals, folded backwards, has originated recently spectacular forms which exalt its elegant “Chinese lantern” structure; and, between the arboreal species, the Hibiscus elatus of Cuba, tall even 25 metres, strikes for the appearance resembling to a poplar, and the showy red or yellow corollas, which often grow nearby, on the same branch, is unusual chromatic contrasts.

But the rose-mallows are not only flower plants. The Hibiscus cannabinus and the Hibiscus tiliaceus, provide good textiles, and from the last one, with very fast growth, they get also a very good cellulose, at low cost, for the paper industry.

The strange pyramidal capsules, long even 20 cm, of an Indian rose-mallow, the Gumbo (Hibiscus esculentus), offer, in the end, to the populations of the Tropics, big and edible spherical seeds.

Boiled, they are consumed in slices in the gravies, but are used also for preparing the “Karkady”, a renowned vermilion drink of the thirties, which is now coming back to fashion.

Useful in liver diseases, the flowers of a similar species, the Hibiscus sabdariffa of Angola, decoration since centuries of the huts of the wizards, have been “discovered” recently also by the modern pharmaceutical industry.

Rich of tonic and digestive properties, present, in fact, a great contents of malic acid, oxalates, saccharose, and hibiscitine. Nothing odd, for the taxonomists, who, starting from the structure of the flowers, make again, practically, with their classifications, the history of the plants: the rose-mallows belong in fact to the family of the Malvaceae, and therefore, we have not to be surprised if, in millennia of evolution, they have worked out, with proper peculiarities, the precious medicinal virtues of the Marsh Mallow and the Mallow.

Hibiscus: splendid exotic flowers which seduce the birds was last modified: May 16th, 2019 by Giuseppe Mazza