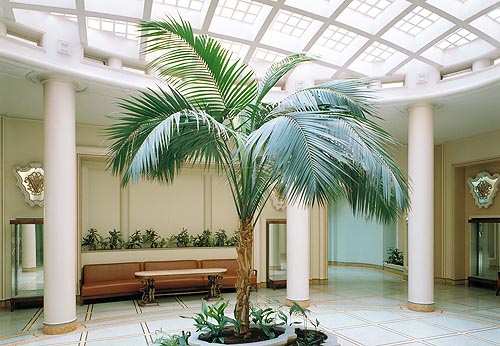 The Howea forsteriana is much used for indoor decoration © Giuseppe Mazza

The name of the genus refers to the place of origin, the island of Lord Howe (Australia).

The species is dedicated to Henry William Forster, senator of New South Wales.

Initially, the Howea forsteriana (C. Moore ex H. Wendl.) Becc. (1877) was included into the genus Kentia, but, in 1877, the great Florentine botanist, Odoardo Beccari, placed it in anew genus, which he called Howea.

In spite of that, the first original name is the one under which it is still commonly known.

In the English-speaking countries, it is also called “Sentry Palm”, or “Thatch Palm”.

Palm native to Lord Howe island, located 600 km far from the eastern coast of Australia, island rich of endemic plants, between which the four palms which grow up there: the Howea forsteriana, the Howea belmoreana, the Hedyscepe canterburyana, and the Lepidorrhachis mooreana.

The Howea forsteriana is the predominant element of the sub tropical forest of the island, up to about 400 metres of altitude. 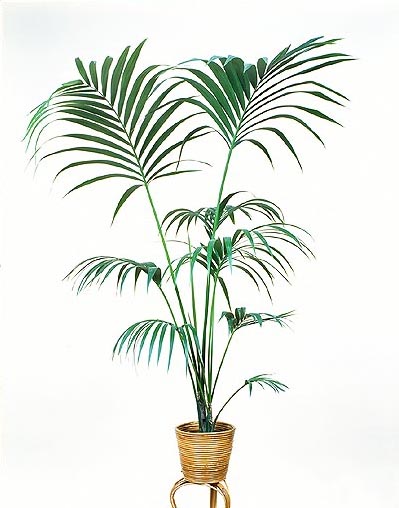 The Howea forsteriana contents with little light and earth © Mazza

It presents a solitary trunk, thin, of about 15 cm of diameter, slightly enlarged at the base, tall 15 metres and even more, of dark green colour (grey in the older part), where are visible the rings left by the junctions of the old leaves.

The leaves, pinnate and elegantly curved, are about 3 metres long, with hanging, dark green leaflets, long up to 70 cm.

It is a monoecious species, with inflorescence formed of 3-7 spikes, long about one metre, which branch out from a wide and short peduncle where stand the flowers of both sexes.

The seeds of the the Howea forsteriana germinate in about 80 days, provided with bottom heat.

Plant of great ornamental value, can be cultivated in open air, in the sub tropical and warm-temperate zones, for the decoration of parks and gardens, in a partly shaded location when young, and regularly watered.

But the most frequent utilization, since from the introduction in Europe, is as indoor plant, its elegance, since the very first years of age, the adaptability to conditions of scarce luminosity, and the absence of particular attentions, render it, still now, one of the most utilized palms, if not the most common, for the decoration of indoor spaces.