The species is native to China (Fujian, Guangdong, Guangxi, Hainan and Yunnan), Japan (Kyushu and Ryukyu Islands), Malaysia, Taiwan and Vietnam, where it grows as epiphyte on the trees of the forests up to about 1200 m of altitude.

The genus is dedicated to Thomas Hoy (ca. 1750-1822), botanist and curator of the gardens of the duke of Northumberland; the specific name is the Latin adjective “carnosus, a, um” = fleshy, with reference to the leaves.

The Hoya carnosa (L.f.) R.Br. (1810) is an evergreen climbing epiphyte with up to 6 m long stems, provided of adventitious roots with which it anchors on the bark of the trees. The leaves, on a 1-1,5 cm long petiole, are opposite, simple, elliptic to ovate-oblong with obtuse or shortly acuminate apex and entire margin, coriaceous, of glossy dark green colour above, paler below, 3,5-13 cm long and 3-5 cm broad. 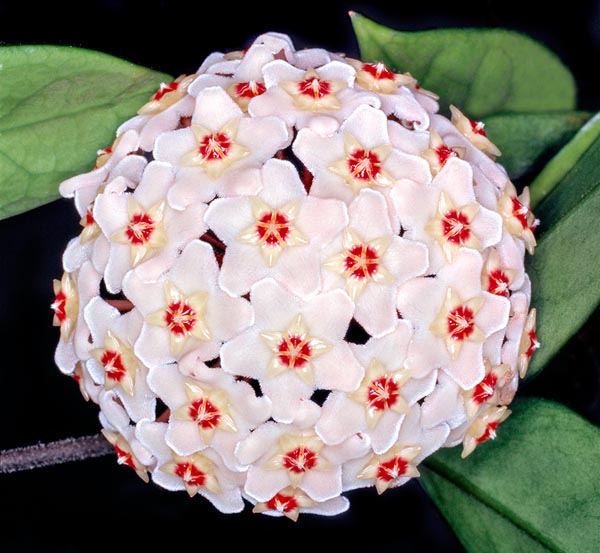 With its adventitious roots, Hoya carnosa reaches the 6 m of height on the South-East Asian trees © Giuseppe Mazza

Umbelliform axillar inflorescences, on an about 4 cm long peduncle, bearing 10-30 flowers, of up to 1,5 cm of diameter, of white, pinkish white or pink colour and intense pink to red centre. Corolla, internally densely covered by papillae that give it a velvety look, with 5 triangular lobes having retroflexed apex and stellate waxy staminal corona with acute segments; the peduncle is remontant, even more times in the same season, and therefore is not to be cut after the blooming.

The flowers, lasting about one week, emit a pleasant slight fragrance, that intensifies by dusk, and produce abundant nectar. The fruits, rarely produced in cultivation, are fusiform follicles, up to about 10 cm long and of 1 cm of diameter, containing numerous thin seeds, 0,5-1 cm long, provided at one extremity of a tuft of silky hairs, 2-2,5 cm long, that favour their dispersion through the wind.

Several varieties have been selected with flowers having different colour and variegated or twisted leaves.

At amateur level it is usually and easily reproduced by cutting, with 2-3 nodes, in loam with addition of siliceous sand or agriperlite for at least a 30% maintained constantly humid, but without stagnations, at the temperature of 24-26 °C. New plants may be obtained by air-layering and also by leaf cutting, with petiole, even if with usually longer times.

Absolutely the most known of the genus, introduced in Europe early in the ‘800, it has diffused fastly thanks to the beauty and the subtle fragrance of its flowers, abundantly produced, and the facility of cultivation also in apartment.

Cultivable in open air in the tropical, subtropical and in the temperate-warm climate regions, where temperatures under the 5 °C are very short lasting exceptions, in very luminous position, also some hours of direct sun in the morning, for a copious blooming.

In the less favourable climates, it is to be cultivated in container, as climbing on appropriate supports or as drooping in suspended pots, to be sheltered during the coldest months in a protected ambient at the maximum possible luminosity and with lowest values of temperature preferably over the 15 °C, utilizing a particularly aerated and draining substratum rich of organic substance, neutral or slightly acidic. 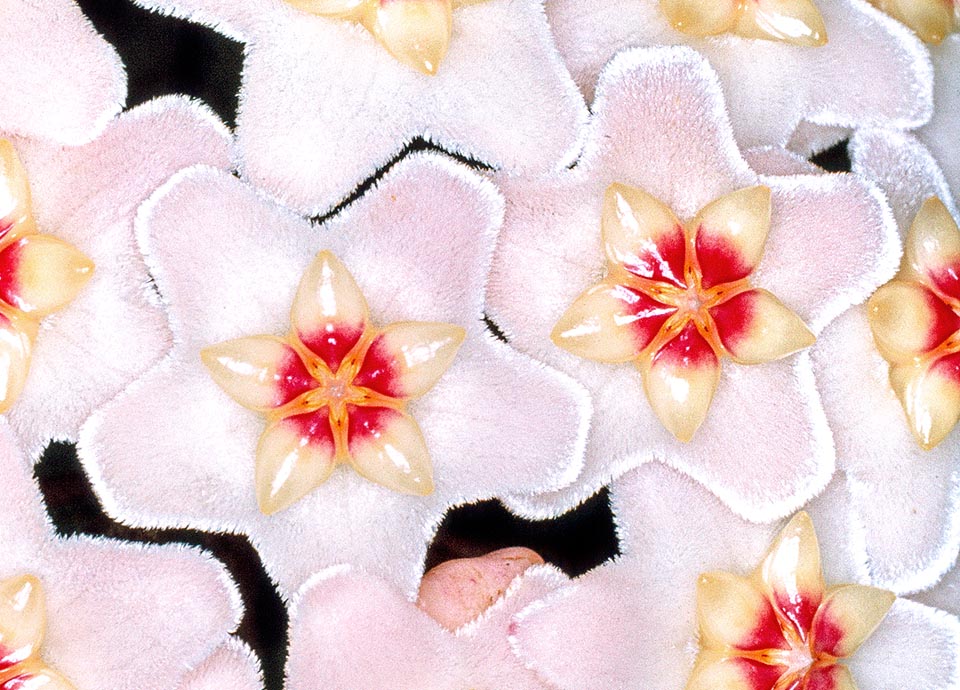 Much cultivated, also for luminous inner spaces, has umbels with 1,5 cm velvety corollas fragrant by night. They can be white to pink with intense pink or red centre © Giuseppe Mazza

Regular waterings in summer, but allowing the substratum to partially dry up before giving water again, almost stopped in winter, in order to keep it only slightly humid, and nebulizations with non calcareous water at ambient temperature in presence of dry air and high temperatures. Monthly fertilizations, in spring-summer, with balanced hydrosoluble fertilizers, with microelements, at 1/3 the dosage shown on the package.

Are to be avoided the displacements and the jumps in temperature when the plant is close to blooming, as this may stop the flowering and cause the premature fall of the buds. The repottings are to be done in spring when the roots have filled up the pot or the loam gives signes of deterioration, having care of keeping the new substratum dry until when the first signs of vegetative regrowth do appear, eventually nebulizing the leaves to prevent their wrinkling.