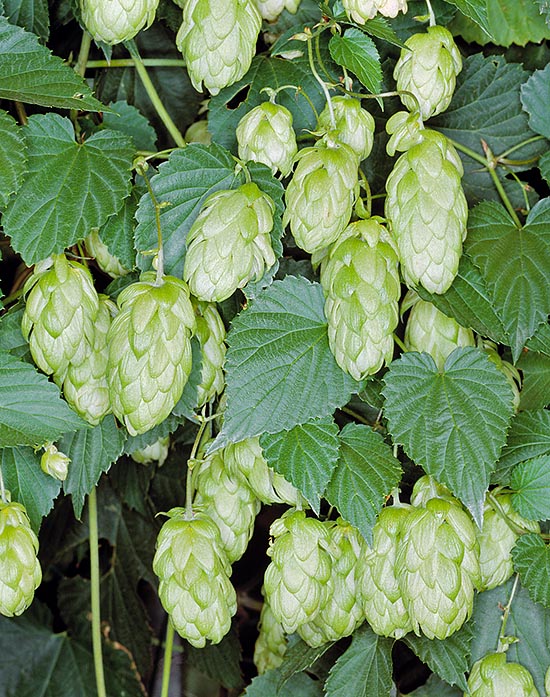 The origin of the Latin binomen is traced back to the terms humus, humeo, damp earth, humus, due to the growing stations preferred by the plant, and from lupus, lupus salicarius, that is, wolf of the willows, because Pliny noted that the twining stems wrapped and choked the young wicker willow plants along the banks of the water streams.

It is a bine climbing plant, perennial, with a big, twisted and fleshy rhizome, from which develop fistulous, herbaceous, twining stems, often of reddish colour, sinistrorse, almost woody when ripe, intertwined to other plants, with rigid and curved hairs (which favour the climbing on bushes, trees, poles, wire mesh and so on) up to 3-6 (<10) m long.

The leaves are opposite in the male plants and alternate in the female ones, long petioled, cordate at the base, with (7 x 10 mm) stipules, the lower ones being palmate-lobed with 3 (5) ovate-acuminate lobes with toothed margin, the upper ones entire, with rather spinulescent petioles and main nervations.

It is a dioecious plant blooming from May to August; the inflorescences are pendulous and glandulose: the male ones are panicle-shaped, with (4 mm) white-yellowish flowers; the female ones are pendulous in (3-4 x 3 cm) ovoid strobili with bracts and membranous bracteoles of 9 x 12 mm, pale green up to brownish-yellow at the time of the fructification, internally equipped with yellow glands secreting a highly aromatic resinous substance.

The fruits are small oval achenes, with shape similar to tiny chestnuts, colour initially green-brown to grey-ash, similar to those of the hemp. It is frequent in the riparian woods, alders, fences, tree-lined banks of ditches, synanthropic vegetation from the plains up to 1200 metres of altitude. For the phyto-therapeutic utilizations as well as for their use in the breweries, the female inflorescences are collected from late August to September, when they are golden-yellow coloured, with the bracts not yet open, during the afternoon with the sun and dry weather; they are to be put on tables in thin layers and are to be dried in the shade in aerated ambient or warmed up to 40-50 °C and conserved, for not more than one year, in containers made of porcelain or dark glass and away from the light.

The hop female plants are cultivated in the hop gardens in all the world, especially in the temperate belt, for the brewing industry which employs the inflorescences to confer the famous drink the typical sour taste and the aromatic scent (which can be well perceived also tasting the resinous yellow glands forming in summer in the female cones); some substances contained in the lupuline have antibiotic properties, synergized by the ascorbic acid, which favour a correct fermentation and a good conservation. 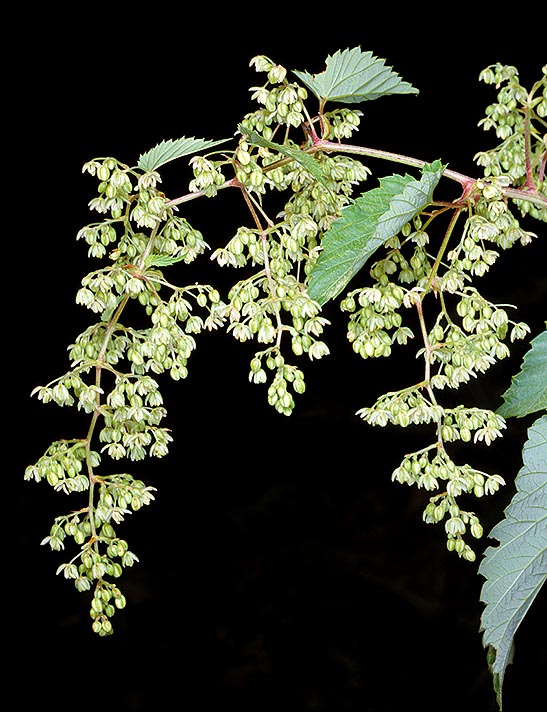 It is a dioecious species. The plant male inflorescence is paniculate © Giuseppe Mazza

The first informations about the hop cultivation date back to the Carolingian times, in the VIII century, when Pepin, father of Charlemagne, gave the Abbey of Saint Denis, close to Paris, his cultivations of hop.

The hop is affected by adversities of fungal type: the downy mildew (Pseudoperonospora humuli), the powdery mildew (Podosphaera macularis) and the Septoria (Septoria humuli) which causes foliar spots and may compromise the production of the cones if the attack happens during the ripening phase.

The whole cones and the lupulin have sedative-depressive properties of the nervous system, useful in conditions of anguish and in the diseases of nervous origin of the digestive system, hypnotic, anaohrodisiac, eupeptic, bitter-stomachic, diuretic, tonic, anti-inflammatory, inhibiting the development of Staphilococcus aureus, Bacillus subtilis, Trichophyton interdigitale, Candida albicans, Escherichia coli, Helicobacter pilori.

The action of the active principles of the hop on the sexual sphere, particularly its sedative action of the sexual hyper-excitability, is known since more than 15 centuries and has been object of many researches after having ascertained that the young women employed in the collection and the process of the inflorescences of this plant, after very few days of activity, started getting their menses independently from the date of the last period and, at the same time, were getting turgid breasts. Also in the phyto-cosmetics the preparations based on inflorescences, thanks to their estrogenic action, are suggested as emollient, relaxing and tonic for ageing, wrinkly and relaxed skins.

In the past, it was suggested to the insomniacs and to those suffering from neuralgia of the neck and the head, to sleep using a pillow filled with dried hop inflorescences. Until the early years of the last century, the stems of hop were collected in winter, after the leaves fall, and were employed in making ropes, and in weaving mats and sacks.

The inflorescences (“Lùpoli stròbilus” or “Lupluli flos”) are used for preparing sedative nfusions useful in the anguish states as well as in the diseases of nervous origin of the digestive apparatus, in dyspepsy and gastric atonia, in sexual erethism, in anxiety, in premenstrual syndromes, difficult lactogenesis, and hot flashes. 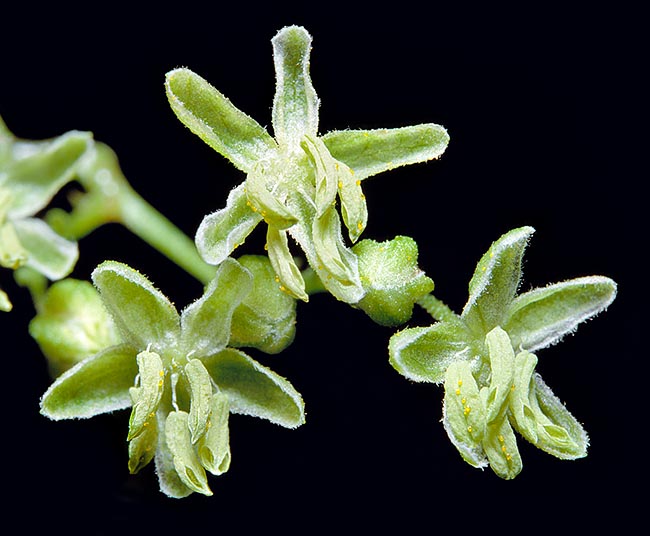 It has tiny 4 mm flowers. Only female cones are used in medicine © Giuseppe Mazza

Its buds, known under the most different popular names, mainly the reddish, large and juicy ones of the male plants, are collected from March to mid April and are known and appreciated as an excellent vegetable: boiled, floured and fried, in savoury omelettes, in the risottos, the soups, the vegetable soups, etc.

A level spoonful of chopped female inflorescences in a pot of boiling water. To leave in infusion for fifteen minutes, sweeten with honey and to drink lukewarm half an hour before going to bed.

To fill up the pillowcase of a small cushion or a cloth bag with the cones (or strobili) of hop, add a handful of lavender flowers, let heat well near a stove or over a radiator and apply of the parts affected by neuralgic pains (trigeminal, sciatica), torticollis, lumbago, etc.

0,25 grams of pulverized cones of hop for a waffle or capsule do be taken thrice a day before meals.

→ To appreciate the biodiversity within the CANNABACEAE family please click here.