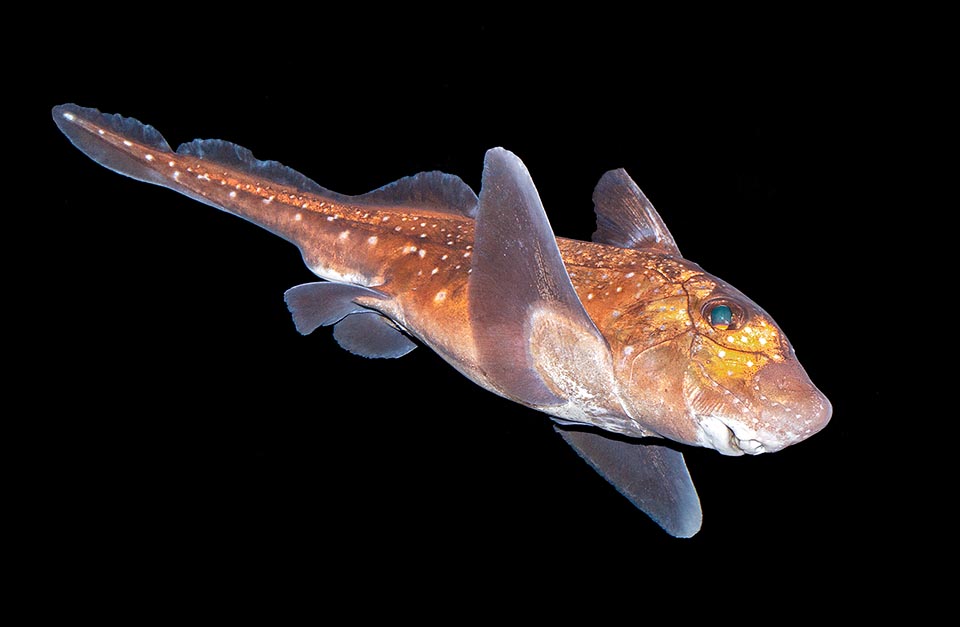 Come to us from yore, the Spotted ratfish or Chimaera (Hydrolagus colliei) is a cartilaginous fish, like sharks and rays, present along the north-eastern coasts of the American Pacific. A rat tail, rabbit snout and emerald green eyes, done for deep waters, that in the darkness reflect the light like those of the cats © Giuseppe Mazza

The Spotted ratfish or Chimaera (Hydrolagus colliei Lay & Bennett, 1839) belongs, like the sharks, to the Class of the Chondrichthyes, the cartilaginous fishes, to the order of the Chimaeriformes, a group that has established, according to the fossils, about 300 million years ago, and to the family of the Chimaeridae counting only 2 genera (Chimaera and Hydrolagus) and 45 species present in the tropical and temperate waters of the Atlantic, Pacific and of Indian Oceans.

Legendary animals with big heads, profile of rabbit and very long tails, often similar to whips. Hence, in various languages, the recurring names of ratfishes and rabbit fishes or, due to the rather little macabre look, ghostly fishes.

The genus Hydrolagus, is born therefore, not by chance, from the Greek words“hydro” (ὕδρω) = water and “lagos” (λαγώς) = hare, whilst the species colliei honours the memory of the Scottish physician naturalist Alexander Collie.

The Spotted ratfish lives along the north-eastern coasts of the American Pacific, mainly from south-western Alaska to California, but also in the coastal waters of Mexico and, further down, up to Costa Rica. 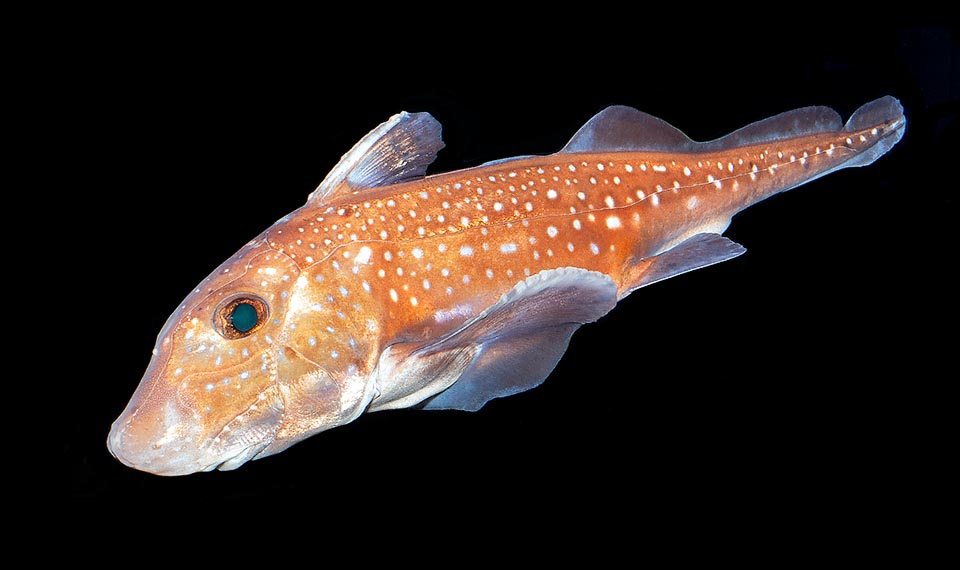 The big pectoral fins are its powerful motor and flies under water like a bird in air. It localizes, mainly with the smell, crustaceans and bivalve molluscs that stand at the base of its diet, integrated with small fishes, worms and starfishes. On the back it displays a huge venomous spine that can kill even big predators such as the seals © Giuseppe Mazza

It prefers the sandy or muddy coasts, with temperatures between the 7 and 9 (12) °C. It has been fished even at 913 m of depth, but usually swims between the 50 and the 400 m. Along the coasts of California the divers meet it often around the 30 m and when looking for food it can be found in very shallow waters.

On the bronze reddish background colour we note numerous mimetic white spots. Like morays, the Spotted ratfish has no scales and unlike sharks the gills have a protective opening, as happens for the operculum in the bony fishes. The females, bigger than the males, reach with the tail, long as almost half the body, the length of 1 m.

Short and blunt, the snout has a rabbit profile with showy incisors and small mouth, but whilst the sharks lose often the teeth and renew them easily, here they are permanent dental plates, particularly solid for breaking the eventual armours of the preys. The Italian name of Chimera elefante (Chimaera elephant) perhaps considers the head, massive seen from the front and of the great triangular pectoral fins that recall the ears of the pachyderm. 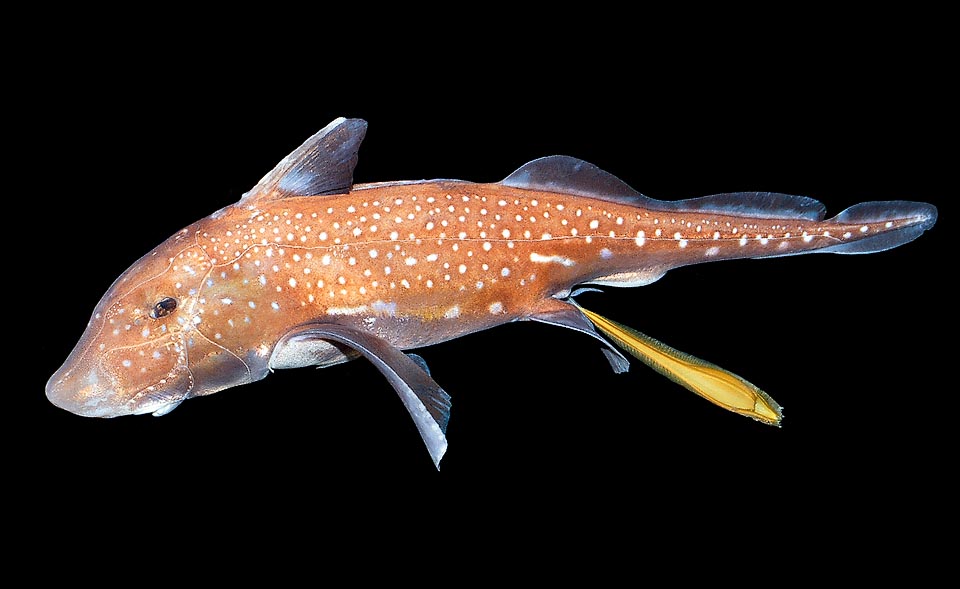 The females, bigger than males, reach the 100 cm, and are oviparous, like most sharks. The ovary cases containing the embryo get out attached to a long filament dangling from the mother when swimming for 4-6 days. When this breaks, they fall on the bottom, usually sticking into the sand in a vertical position © Giuseppe Mazza

The front edge of the dorsal fin has a venomous spine with clear dissuasive function: in the man it causes only painful injuries but kills the predators like the Common seal (Phoca vitulina), opening in the oesophagus or in the stomach.

In the darkness, the big emerald green eyes, done for deep waters, reflect the light as those of the cats, and the males have on the front a particular tentacle with enlarged and wrinkly tip, a sort of club to hold the female during the mating that may last even 2 hours.

The Spotted ratfish hunts mainly during the night. Swimming slowly over the bottoms it localizes, mainly with the smell, the presence of crustaceans and bivalve molluscs that are at the base of its diet, completed by small fishes, worms and starfishes.

The females are oviparous like most of the sharks and lay even a thirty eggs per year. They are about 12 cm long, protected by a solid cylindrical case, and are emitted twice at a time with a very long labour that may last even 30 hours. They get out with a long filament that then keeps them attached to the mother, drooping, for 4-6 days. 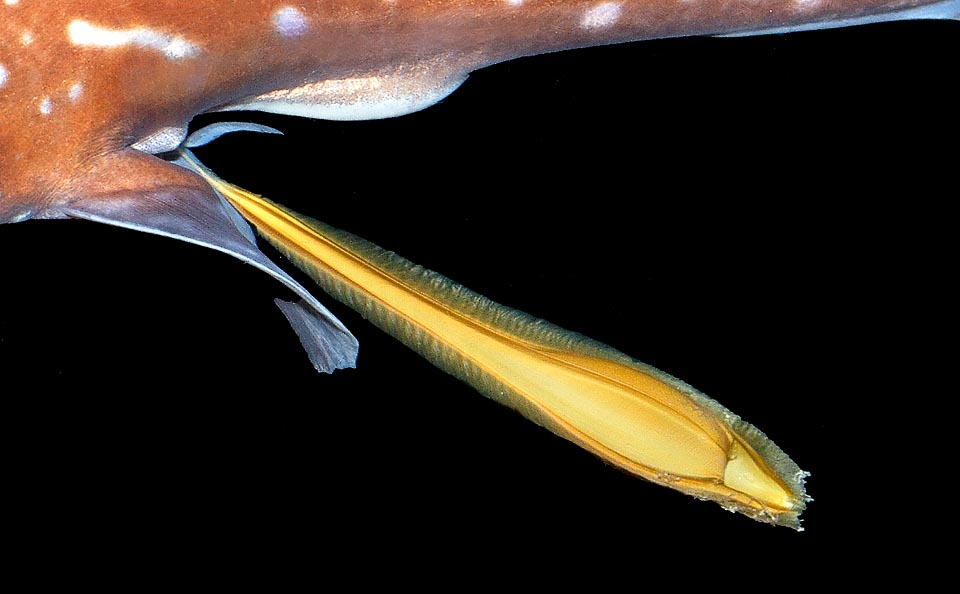 Close-up of the ovary case. It measures 12 cm and the incubation lasts usually 5-10 months. The babies upon the birth measure 14 cm and double their size in one year © Giuseppe Mazza

When it breaks, the eggs fall on the bottom often sticking into the sand in vertical position.

The mother watches them from above for some day leaving them only when it sees that there are no predators around and are well integrated to the environment. The incubation lasts usually 5-10 months and the just newborns measure about 14 cm doubling in size in one year.

The Spotted ratfish is not directly menaced by the man because the flesh has an unpleasant taste and usually keeps far from the divers. It attacks them only if feeling menaced or for territorial reasons with the venomous spine erect giving proof of great agility as if it should be flying like a bird with twists and turns supported by those two big pectoral fins.

Keeping in mind the weak resilience, with a minimum doubling time of populations of 4,5-14 years, the species has now (2022) a fishing vulnerability index moderately high, marking 50 on a scale of 100.