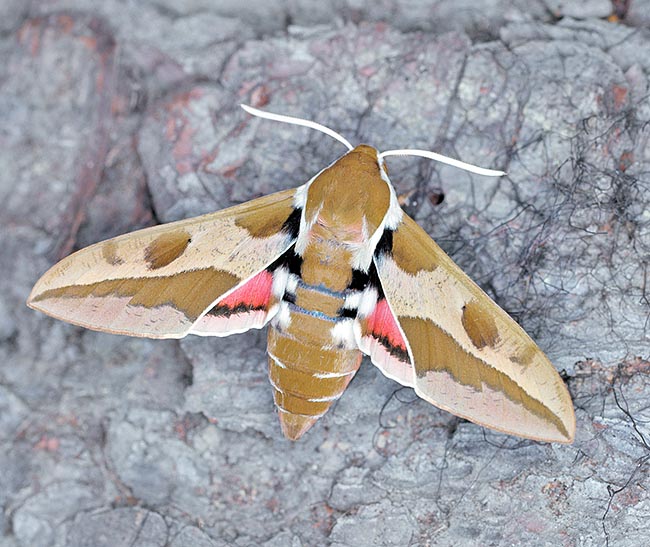 Known as Spurge hawk-moth, the Hyles euphorbiae (Linnaeus, 1758) is a lepidopteran belonging to the family of the Sphingidae, vast group of heteroceran butterflies with mainly nocturnal activity, present in all the continents and with a particular morphology distinguishing them from any other lepidopteran.

They have stocky body, very robust wings, narrow and pointed, that when resting are folded like a roof along the body and are endowed of extremely evolved and powerful flight ability. Because of the last characteristic, they are normally migrating species, performing wide-ranging movements, while trying to seasonally colonize new areas.

The spurge hawk-moth is itself a migratory species and every summer effects migrations leading it to arrive in the lands placed at the extreme north of the Euro-Asian continent where, after having given life to a summer generation will not survive to the local winter conditions.

It is thought that the genus Hyles groups species still under strong evolution and that these attempts of colonization towards new areas always more to the north, are the result of this continuous evolutionary struggle. The etymology of the scientific name invariably recalls the Greek mythology. Hyles is the name of one of the Centaurs, half-human and half-horse beings who usually lived in the old Thessaly, in Greece. The species euphorbiae simply identifies the Euphorbia the genus of plants hosting usually the larvae of this moth. 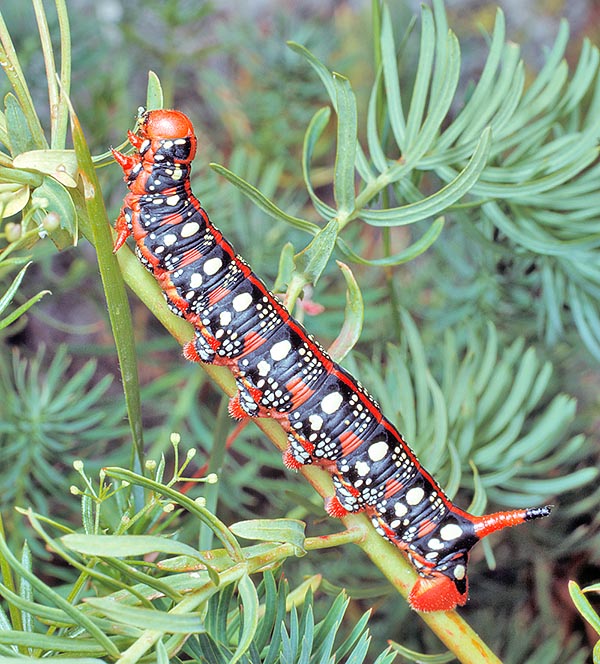 Assimilating the toxic spurge leaves it eats, the caterpillar of Hyles euphorbiae is steeped in venom and can therefore exhibit showy colours and a caudal point serving as warning to predators © Giuseppe Mazza

Also all European common names are related to the description of the host plant. Spurge hawk-moth in English; Wolfsmlchschwarmer in German; Esfinge de la lechetrezna in Spanish; Sphinx de l’euphorbe in French.

It is a fairly common moth in Europe especially in the southern part of the continent. In fact, it is a typically Mediterranean butterfly and lives in all the regions coasting this sea. The range extends, through a vast belt including purely steppe and arid areas, up to Mongolia.

Significant colonies are also present in some central European areas where it is gradually replaced by the congener Bedstraw Hawk-moth (Hyles gallii), species having a much more eastern range getting up to the Far East and reaching also North America. These two hawk-moths are difficult to distinguish. The spurge hawk-moth has been introduced by the man in North America for helping in the struggle against some infesting types of spurge (Euphorbia esula).

The Spurge hawk-moth is a fair-sized moth with a wingspan of about 75 mm. The fore wings are very narrow and pointed of ochre colour with paler streaks and a narrow belt of the same colour running along the whole length of the wing. Conversely, the rear wing is coloured of red and edged along the whole margin by a narrow ochraceous band, bordered by a parallel black line.

The rear wing is always invisible when resting and can be observed only in flight during the feeding phases. The flight of the sphingids during this activity is rather characteristic as it imitates the behaviour of the hummingbird, remaining absolutely motionless and taking advantage of the long tongue for sucking the nectar of the flowers. 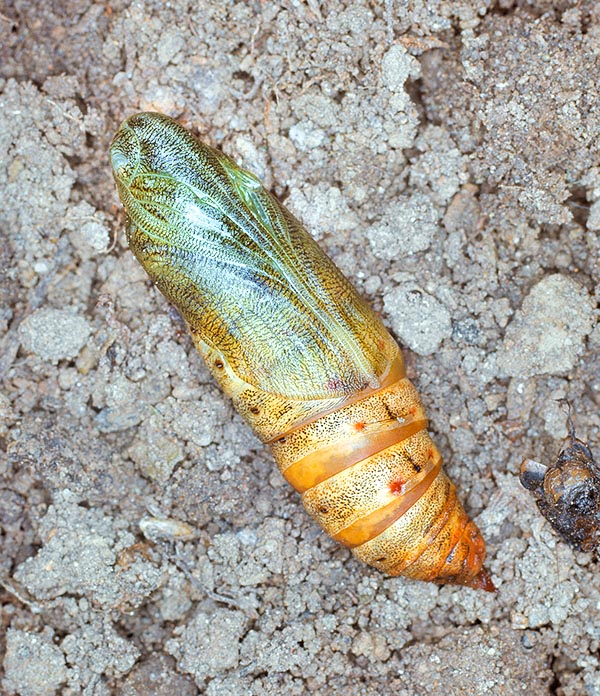 Not without reason, in fact, a good number of species belonging to the family of the Sphingidae, are grouped in the subfamily of the Macroglossinae whose etymon identifies this peculiarity: “makros” = big, long and “glosse” = tongue.

The body is very big and stocky always of the same ochre colour of the wings, with various transversal bars of a paler colour along all its length. The antennae are very robust and elongated with thin and slightly curved apices. Various subspecies have been classified among which: Hyles euphorbiae euphorbiae, Hyles euphorbiae conspicua , and Hyles euphorbiae robertsi.

The spurge hawk-moth is a monovoltine species even if in some very warm areas a second generation may be observed.

It lays the eggs in cluster directly on the host plant sticking them along the stem.

The eggs are pale green and are rather camouflaged among the mall leaves of the spurge.

They will hatch rapidly in less than ten days, especially in the warmest summer periods and the small caterpillars will nourish immediately and greedily of the host plant even if notoriously this essence emits a latex irritating for all other insects and animals.

As a matter of fact, the caterpillars are not edible for the predators rightly because they assume, during their growth, the toxic principles of this plant. They are extremely coloured and during the last phases of their growth they reach remarkable dimensions, characteristic they do not dare to hide seen that they keep perched and well visible also during the day, on top of the host plants, defended by their aposematic colouration. In fact, not having foes able to attack them, they have no fear of being sighted. 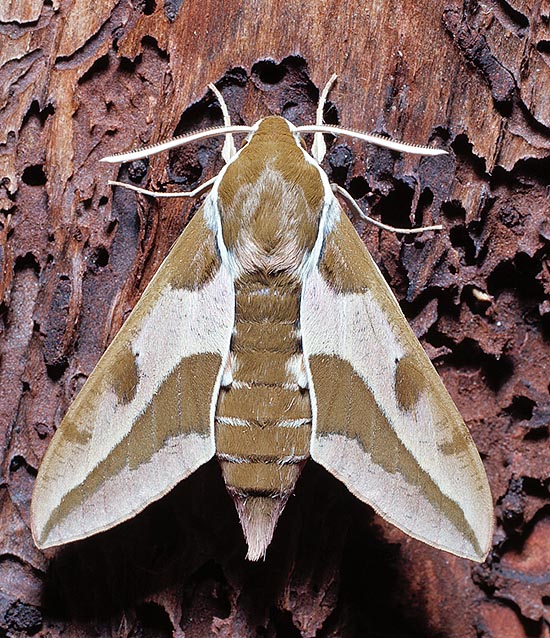 They can be completely red streaked in black or green with black dots and stripes or, yet, greenish red with white dotting.

On the tail, characteristic common to all caterpillars of the sphingids, stands a reddish spine with black point, long even one centimetre. It has no defence function but acts as deterrent. If touched, the caterpillar emits an irritating greenish liquid which render it absolutely disgusting for the unwary aggressor.

After having reached the maturity the caterpillar leaves the host plant and after long wandering, done at times with remarkable speed, forms the chrysalis creating a capsule of vegetal debris it anchors on the surface of the ground.

The intermediate generation will remain in this stage for about two weeks whilst that destined to the following year will spend the whole winter and will appear only in June.

It will fly for the whole summer from the month of June up to late October, nourishing during the crepuscular hours of the nectar of various floral essences.

Like all sphingids, the flight of these moths is rather noisy and due mainly to the wing beat in the moment of the track-stand.