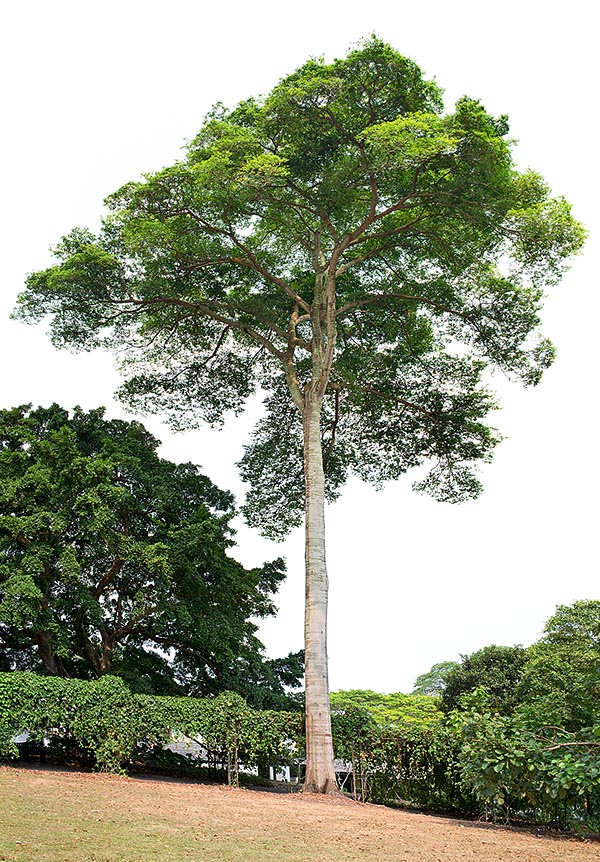 The name of the genus comes from the Latin “himenaeus” = marriage, with reference to the leaves formed by two leaflets; the specific name is one of those used locally.

The Hymenaea courbaril L. (1753) is a usually 30-40 m tall tree with erect trunk, of up to more than 1 m of diameter, with smooth and greyish bark and tabular roots (roots similar to buttresses contributing to the support of the tree), in the oldest specimens, up to 1 m tall. The leaves, on a 1,5-2 cm long, are alternate and formed by two oblong subsessile leaflets with entire margin and obtuse or pointed apex, asymmetric with respect to the central rib, coriaceous, of glossy dark green colour above, paler below, 5-10 cm long and 3-5 broad. Terminal panicle inflorescences, 10-15 cm long, bearing whitish bisessual flowers, at times suffused of purple, of about 3,5 cm of diameter. Calyx formed by 4 oblong-ovate concave sepals, 1-2 cm long, tomentose, corolla with 5 unequal elliptic petals, 1,5-2 cm long petiole and 1 cm broad, and 10 white stamina, 2,5-3,5 cm long. The fruits are indehiscent (that do not open when ripe) woody legumes with oval section, 4-16 cm long, 2-6 cm broad, and 2-3 cm thick, of reddish brown colour. The fruits contain 1-5 slightly compresses ellipsoid seeds, 2-3 cm long and 1,8-2,5 cm broad, of glossy brown red colour, immersed in whitish powdery pulp, edible but od rather unpleasant smell.

It reproduces by seed, previously scarified and immersed in water, frequently changed, for three days, in sandy loam maintained humid at the temperature of 26-28 °C, with germination times of 2-4 weeks and first blooming when 8-12 years old.

Species cultivable in the tropical and humid subtropical climate zones, where requires an exposition preferably in full sun, adapting to different types of soil, also poor, and bearing water stagnations as well as drought periods. 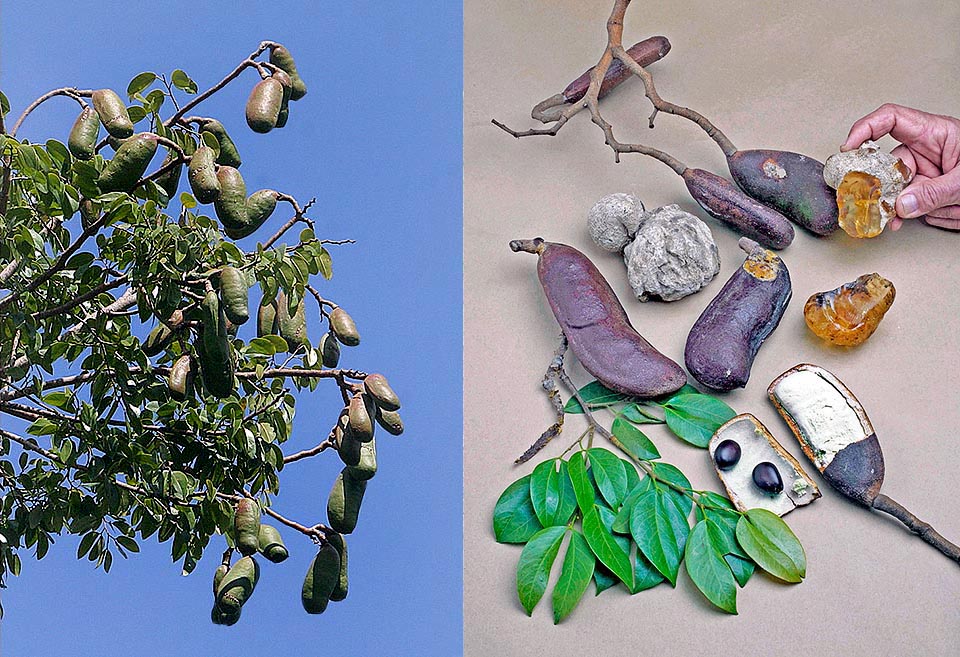 Close-up of fruits, seeds and resin. It forms on the bark scars and underground (grey blocks). A prized edible powder is got from the legumes © Charles Brewer Carias

Mainly cultivated for the reddish brown wood, hard, heavy and fine-grained, though not easy to work, utilized in carpentry, rural and naval constructions, frames, in the production of plywood and especially, for its attractive finished look, in the construction of valued furniture, in veneering, for floors, artistic objects, sports gear and musical instruments. The aromatic resin of orange colour that exudes from the bark and that solidifies on the tree or falls on the soil, called copal, is utilized as base for varnishes and in some locations as incense. Bark, rich of tannins, and resin, that has antifungal activity, are since time variously employed in the traditional medicine for various pathologies. The pulp surrounding the seeds, of sweet taste, is at times locally consumed, despite the unpleasant smell, as it is or used for preparing a refreshing drink and, after fermentation, an alcoholic drink.

It is often utilized in the reforestation programmes of degraded areas, whilst the employment as ornamental plant is limited for the heavy legumes that rotting on the ground emit an unpleasant odour.