The Garibaldi damselfish the Hypsypops rubicundus (Girard, 1854), belongs to the class of the Actinopterygii, the ray-finned fishes, to the order of the Perciformes and to the family of the Pomacentridae, that of the clownfishes and of the damselfish, that counts 29 genera and more than 400 species.

The name of the genus Hypsypops comes from the Greek “ὕψ” (húps) = upward, up and “ὤψ” (ops) = face, due to cheeks particularly high, whilst the specific rubicundus = vermilion red in Latin, refers to the colour of the fish.

The vulgar name of Garibaldi fish also comes from the bright red colour of its livery with reference to the scarlet shirts of the followers of Garibaldi, patriot, leader and writer of the Italian Risorgimento.

The Hypsypops rubicundus is present only in the central-eastern Pacific along the coasts of California. Its range spreads from Monterey Bay in USA, to the northern coasts if Baja California, in Mexico, including the overlooking Island of Guadalupe.

Unlike most Pomacentridae that live among the madrepores of the tropical seas, this is a species of cooler water, with temperatures similar to those where lives the Damselfish (Chromis chromis) of Mediterranean. 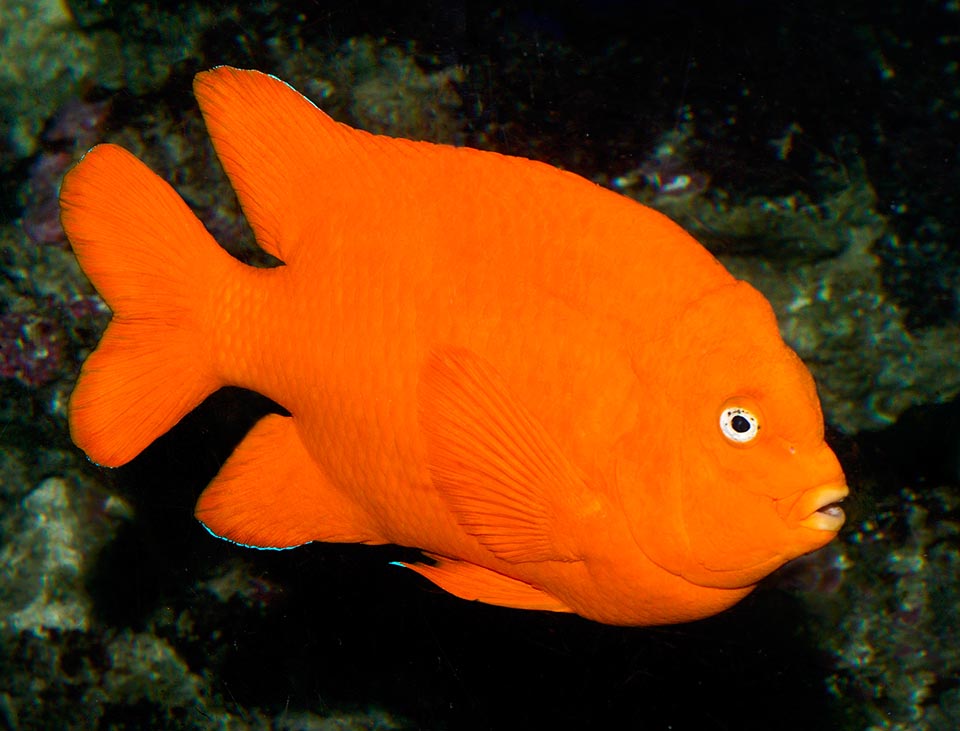 It frequents the rocky coasts, rich of hiding places, surrounded by forests of algae rich of food and raw material for fabricating the nest necessary for its reproduction. It is usually found in shallow waters, never under the 30 m of depth.

Even 30 cm long, the Garibaldi damselfish is the biggest member of the family Pomacentridae.

The adult livery, fins included, is bright red orange, whilst the juveniles are much more pale, reddish with blue small spots.

The Hypsypops rubicundus is a fish nourishing mainly of plankton, bryozoans and sponges it finds in the forest of algae and that it detaches from the rocks of its small territory around the den. 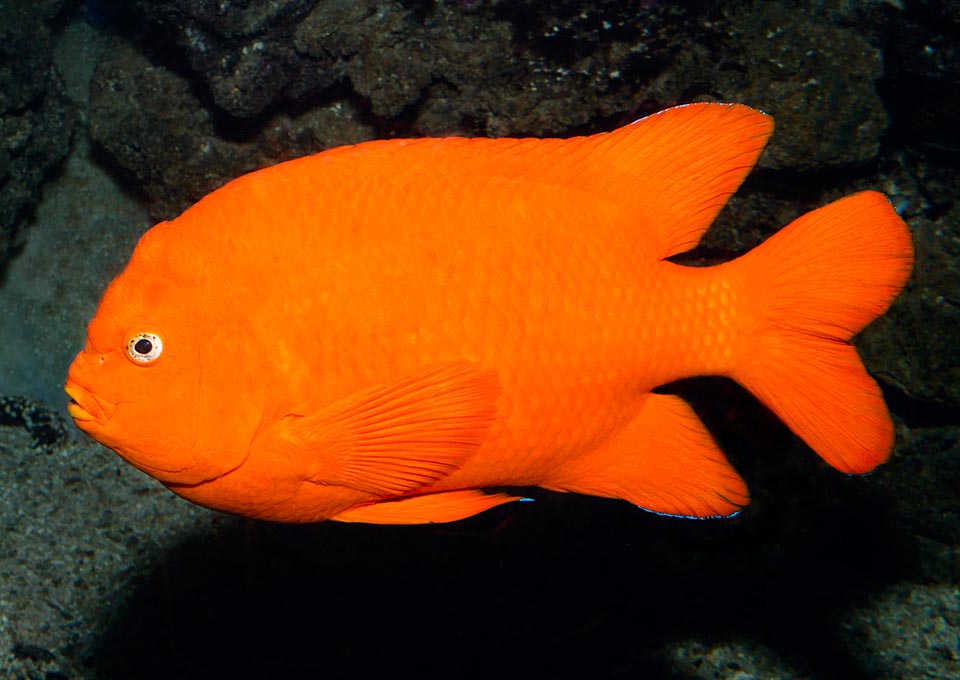 The month before the reproduction sees the males busy in cleaning up the rocks and collecting algae. To attract a female in fact they must build a roundish algae nest, often 2,5 cm thick and as wide as a tire. Placed in an accessible place, it is like a morbid aerated basket for the 15.000-80.000 eggs a female may lay.

Once the work is finished, the male has then to find a partner and to do this it emits sounds with a particular dance. To attract her it swims in a ring inside and around the nest and grits its pharyngeal teeth with a pounding noise, to show, with its physical prowess, that it will have the necessary strength for defending the brood during the incubation. In fact, after the fecundation it must to stand the watch to the nest till the hatch, for 19-21 days, attacking ferociously with bites the fishes that turn around and even the divers who dare to get close.

The Hypsypops rubicundus has reproduced in captivity, but seen the size it is a species which may be kept only in large public aquaria. Unfortunately, seen the modest range where it lives, and the week resilience, seen that are needed 4,5-14 years to double the members decimated by the events, the vulnerability index is nowadays (2020) moderately high, marking already 51 on a scale of 100.