Iguanas, agames and chameleons: oddities of the saurians 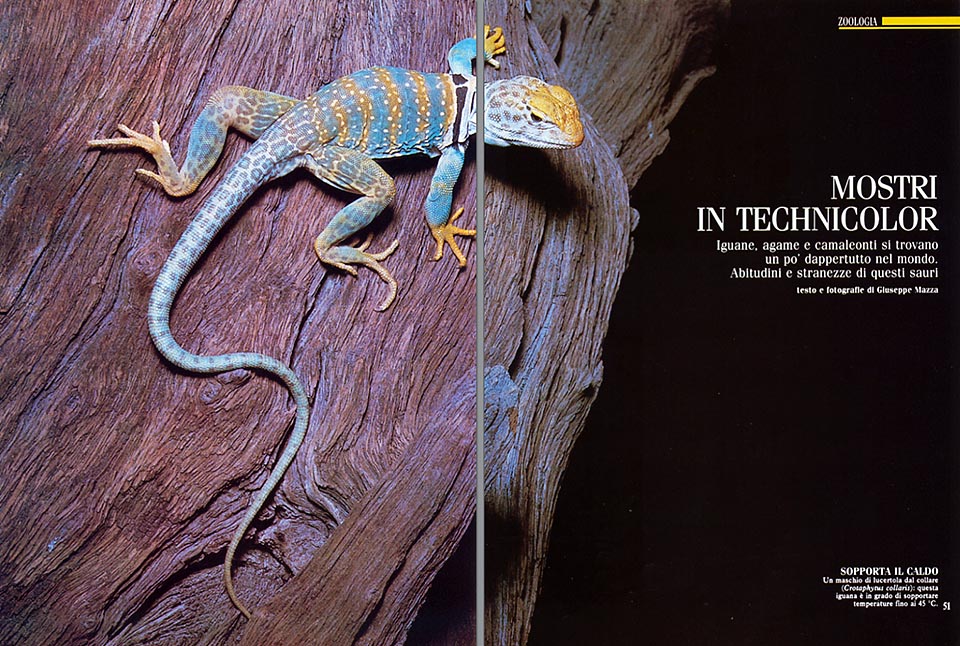 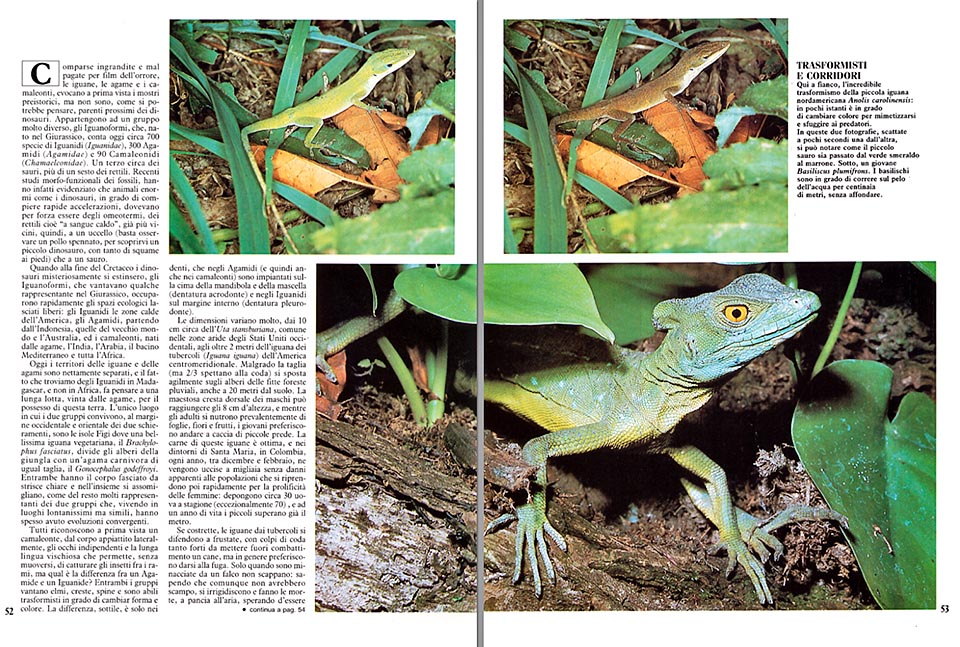 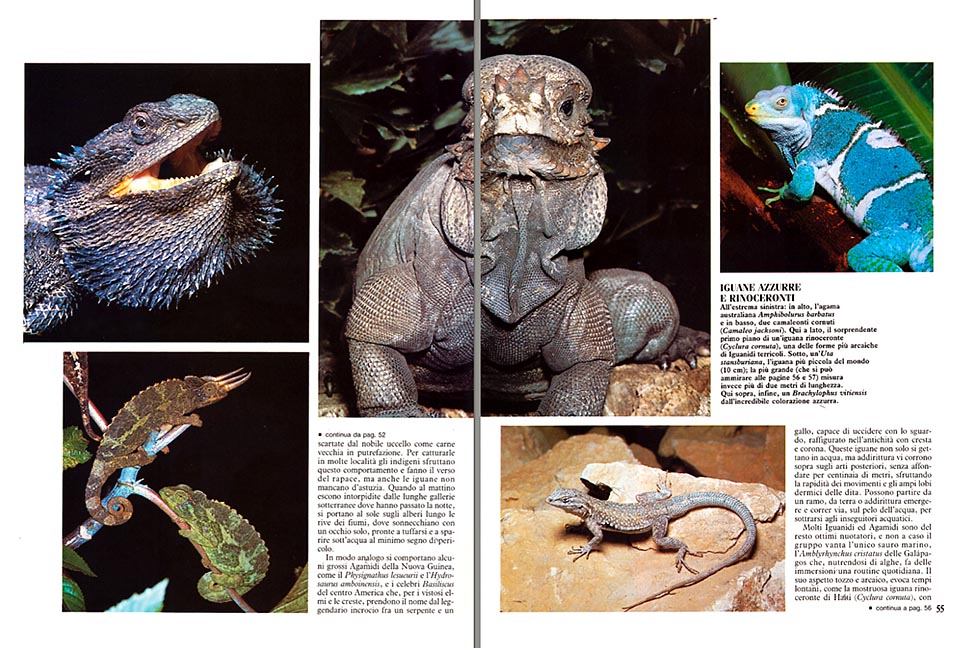 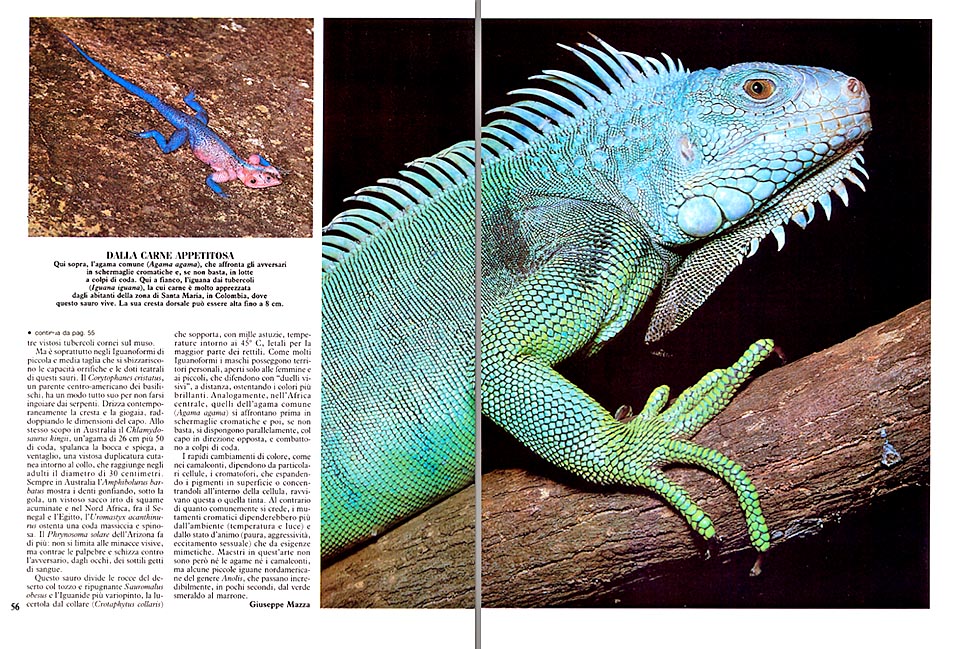 Enlarged and underpaid appearances for horror films, iguanas, agamas, and chameleons, evoke, at sight, prehistoric monsters, but are not, as we might think, near relatives to dinosaurs.

They belong to a quite different group, the Iguania, which born in the Jurassic, counts nowadays about 700 species of Iguanids (Iguanidae), 300 Agamids (Agamidae), and 90 Chameleons (Chamaleonidae). roughly, one third of saurians, plus one sixth of the reptiles.

Recent morphofunctional studies of fossils, have in fact, made evident that enormous animals like the dinosaurs, capable to accomplish quick accelerations, had obligatorily to be homeothermic, that is, reptiles with “hot blood”, already closer, then, to a bird (it’s sufficient to observe a plucked chicken, to discover there a small dinosaur, with even scales on the feet!) rather than to a saurus.

When, at the end of the Cretaceous, they mysteriously disappeared, the Iguanoforms which had some specimen in the Jurassic, occupied rapidly the ecological spaces left free: the Iguanidae, the warm areas of America; the Agamids, starting from Indonesia, those of the old world and Australia; and the Chameleons, born from Agamas, India, Arabia, the Mediterranean basin, and all Africa.

Nowadays, territories of iguanas and agamas are clearly separated, and the fact that we find Iguanidae in Madagascar, and not in Africa, gives the idea of a long struggle, won by agamas, for the possession of the land.

The only place where the two groups live together, at the western and eastern edges of the two bodies, are Fiji Islands, where a wonderful vegetarian iguana, the Brachylophus fasciatus, shares the trees of the jungle with a carnivorous agama of the same size, the Gonocephalus godeffroyi.

Both have the body surrounded by bright strips and, in the whole, they resemble, as, however, many members pf the two groups, which, living in very, but similar, far away sites, have often had convergent evolutions.

Everybody identifies, at sight, a chameleon, with its body flattened on the sides, independent eyes and the long, sticky tongue, which allows him, without moving, to catch the insects between the branches, but, what is the difference between and Agamid and an Iguanidae ?

Both groups boast helmets, crests, thorns and clever transformers able to change shape and colour. The difference, subtle, stands only in the teeth, which, in the Agamidae (and therefore also in chameleon), are fixed on the top of the mandible and the jaw (acrodont teeth), and the Iguanidae, on the inner border (pleurodont teeth).

Dimensions vary greatly, from the about 10 cm of the Uta stansburiana , common in the arid areas of western United States, to the more than 2 metres of the Tubercle iguana (Iguana iguana), of Central-southern America. In spite of the size (but the two thirds belong to the tail), it moves with agility on the trees of the thick rainy forests, even at 20 metres from the ground. The majestic dorsal crest can reach the 8 cm. of height, and whilst adults feed mainly of leaves, flowers and fruits, young specimen prefer hunting minor species.

The flesh of these iguanas is very good, and in the surroundings of Santa Maria, in Colombia, every year, from December to February, they are killed by thousands, without apparent harm to the populations which then rapidly recover thanks to the prolificness of the females.

They lay about 30 eggs per season (exceptionally, 70), and when one year old, the young surpass the metre. If obliged, the tubercle iguanas defend themselves by whipping, with hits of tail, so much strong to disable a dog, but, usually, prefer to run away. Only when they are threatened by a hawk, the do not go away: knowing that in any case there would be no help, they stiffen as they were dead, flat on the back, hoping to be rejected by this noble bird, as old, putrescent meat.

In order to catch them, in many sites, natives profit of this behaviour, and imitate the cry of the bird, but also iguanas do have their own tricks. When , in the morning, they get out, sleepy, from the long underground tunnels where they have spent the night, they move to the sun on the trees along the banks of the rivers, where they doze, with one eye only, ready to dive and disappear under the water at the first smallest sign of danger.

In a similar way, behave some big agamids of New Guinea, like the Physignathus lesueurii, the Hydrosaurus amboinensis and the famous Basiliscus of central America, which, owing to the showy helmets and crests, assume the name of the legendary breeding between a snake and a cock, able to kill with a look, which, in the antiquity, was represented with crest and crown.

These iguanas not only jump in the water, but even run over it with their back legs, without sinking, for hundreds of metres, taking advantage of the rapidity of movements and the ample dermal lobes of the fingers. They can set out from a branch, from the ground or even emerge and run away, on the surface of water, to escape from aquatic chasers.

But it is especially the Iguania of small and medium sizes where the horrific capacities and the theatrical qualities of these saurians become more evident.

The Corytophanes cristatus, a central American relative of the Basilisks, has its own system for not being swallowed by snakes. It raises in the same time the crest and the dewlap, thus doubling the dimensions of the head. For the same purpose, in Australia, the Chlamydosaurus kingii, an agama of 26 cm plus 50 of tail, opens wide the mouth, and shows, fan like, a very large duplication of the skin around the neck, which reaches, in adults, the diameter of 30 cm.

Always in Australia, the Amphiboloryus barbatus displays the teeth inflating, under the throat, a showy bag full of pointed scales, and in North Africa, between Senegal and Egypt, the Uromastyx acanthinurus exhibits a bulky and thorny tail.

The Phrynosoma solare of Arizona makes something more: it does not confine itself to visual threats, but contracts the eyelids and squirts against the foe, from the eyes, thin jets of blood.

It shares the rocks of the desert with the stubby and disgusting Sauromalus obesus, and the most variegated Iguanid, the Collar lizard (Crotaphytus collaris), which endures, with many ruses, temperatures around 45 °C, which are deadly for most of the reptiles.

Like many Iguanoforms, males possess own territories, open only to females and young, which they protect with “visual duels”, at distance, exhibiting the most brilliant colours.

Similarly, in Central Africa, the males of the common Agama (Agama agama), at the beginning, stand face to face in chromatic skirmishes, and then, if this is not enough, place themselves in parallel lines, with the heads oriented in opposite direction, and fight with blows of tail.

The rapid change of colour, like for chameleons, depend on particular cells, the chromatophores, which revive this or that dye, by expanding the surface pigments or concentrating them inside the cell.

Contrary to what commonly is believed, the chromatic changes depend more from the environment (temperature and light), and from the mood (fear, aggressiveness, sexual excitement), rather than from mimetic needs.

Masters in this art are not the agamas of the chameleons, but some small North American Iguanas of the gender Anolis, which change incredibly, in a few seconds, from the green emerald to the brown colour.

Iguanas, agames and chameleons: oddities of the saurians was last modified: December 28th, 2019 by Giuseppe Mazza
error: Content is protected !!