The plant is native to Andaman Islands, southern India (Eastern Ghats) and Sri Lanka where it grows in swampy areas and along the banks of the water streams in the underwood of the deciduous and semi-deciduous humid forests, up to about 1000 m of altitude.

The generic name id the combination of “India” and of the Greek substantive “ἄνθος” (ánthos) = flower; the specific name is the Latin adjective “virgatus, a, um” = of woven wicker. 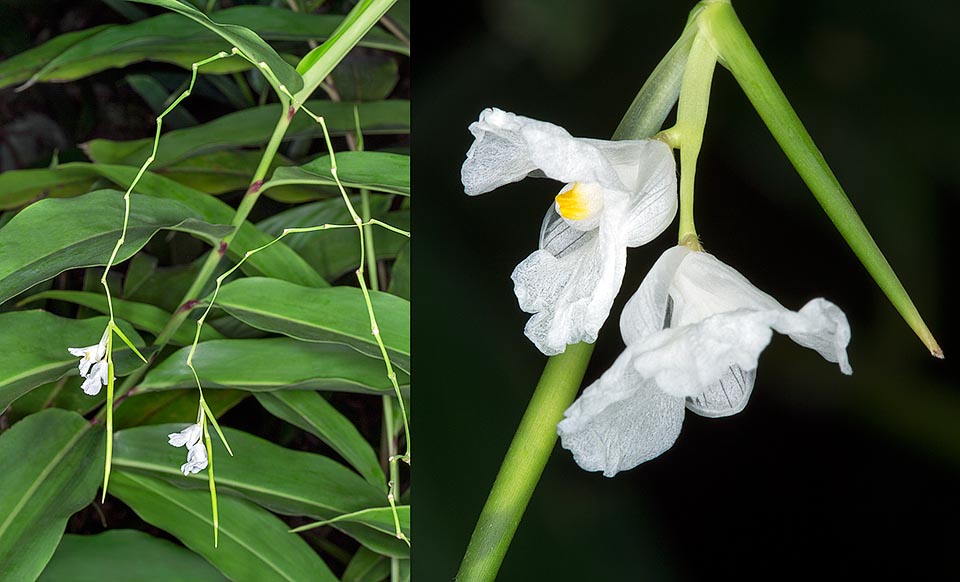 The Indianthus virgatus is native to the swamps of South India, Andaman Islands and Sri Lanka. Leaves and rhizomes are locally utilized for various pathologies © G. Mazza

The Indianthus virgatus (Roxb.) Suksathan & Borchs. (2009) is a perennial rhizomatous herbaceous species, evergreen, that forms thick tufts with simple, thin, 1,5-4 m tall stems. The leaves on an about 1 cm long petiole, are distichous, lanceolate, with entire margin and cuspidate apex, of bright green colour, coriaceous, 15-45 cm long and 4-15 cm broad. Panicle terminal inflorescences up to about 50 cm long, dichotomous, with thin ramifications and white flowers, odourless, in pair, subtended by a green lanceolate bract, about 4 cm long and 0,5 cm broad. Deciduous sepals, short, lanceolate with pointed apex, corolla with tube shorter than the sepals and 3 oblong lobes, 2 outer obovate petaloid staminodia, about 1,5 cm long, the inner ones being smaller and trilocular ovary. The fruits are obovoid berries of green colour. It reproduces by seed, but usually and easily by division.

Poorly known species outside the origin zones, where it is almost exclusively present in botanic gardens, cultivable in the humid tropical and subtropical climate zones in full sun or partial shade on soils maintained constantly humid. The fibres gotten from the stems are locally utilized for mats, hats, handicrafts and in the fabrication of paper. The leaves, particularly resistant, are employed by some populations for wrapping and cooking foods to which they give a special aroma. 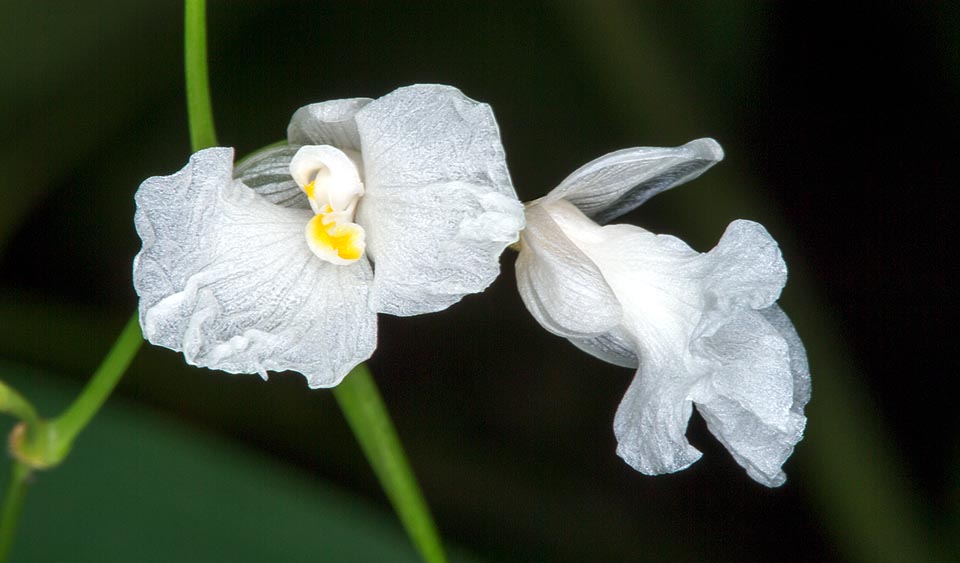 Almost a bride veil for the wedding of the tiny white flower that stands always in pair, subtended by a lanceolate bract © Giuseppe Mazza

Leaves and rhizomes are utilized in the traditional medicine for various pathologies; some laboratory studies have evidenced in the extracts of the rhizome the presence of bioactive compounds with antioxidant and hepatoprotective properties worthy of further study for a possible utilization in the official pharmacopoeia.