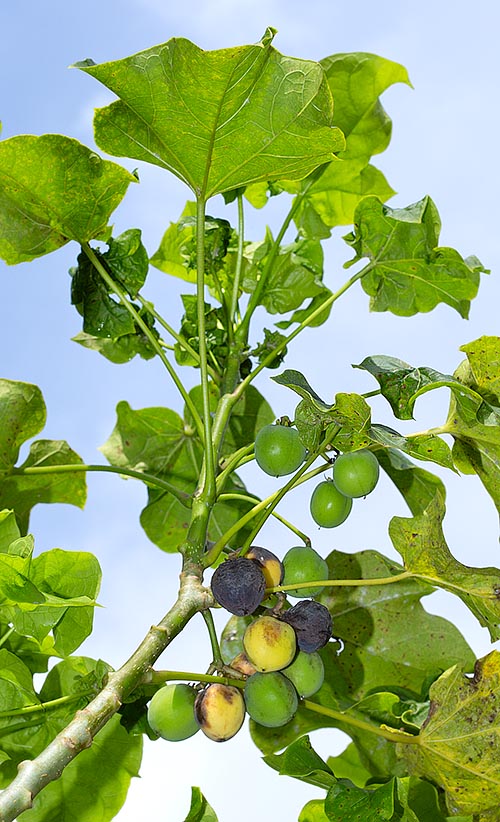 At home in Central and South America, Jatropha curcas is a shrub or a 2-5 m small tree. Very poisonous, as many Euphorbiaceae species, has also some medicinal virtues © Giuseppe Mazza

The name of the genus comes from the combination of the Greek terms “ἰατρός” (iatrόs) = physician and “τροφή” (trophé) = aliment, with reference to the medicinal properties attributed to the species belonging to the genus; the specific name, of unsure origin, appears in the Colóquios written by the Portuguese physician and naturalist Garcia de Orta (1501-1568) published in 1563.

The Jatropha curcas L. (1753) is a shrub or small evergreen tree, deciduous during the drought periods, 2-5 m tall, with smooth bark and greyish branches with milky or yellowish sap.

The leaves, on a 6-20 cm long petiole, are alternate, ovate to lobate with 3-5 lobes, with cordate base and central lobe with pointed apex, 6-20 cm long and broad, of dark green colour.

The inflorescences, usually axillar on an up to 7 cm long peduncle, are panicles or biparous or multiparous cymes with unisexual flowers on the same inflorescence of yellowish green colour; usually there is one female flower placed on top of every main ramification surrounded by a group of male flowers on the lateral ones, with a ratio of about 1:30. Male flowers, of about 0,7 cm of diameter with 5 free ovate sepals, about 0,4 cm long, 5 oblong petals, merged in the lower half, about 0,6 cm long, and 10 stamina arranged on two whorls of five; female flowers similar to the male ones, but slightly bigger, with 3 bifid styles at the apex.

The fruits are globose or ellipsoid dehiscent capsules, of 2,5-3 cm of diameter, of yellow colour, not edible, containing 3 ellipsoidal seeds, 1,5-2 cm long, of black colour, poisonous. It reproduces by seed that germinates in 1-2 weeks, with the first fructifications after 2-3 years, and by cutting that easily roots. Specie that arouses more and more interest due to its capacity to grow in semi-arid, poor and degraded areas, unsuitable for other cultivations, and to furnish an oil with promising properties as biofuel, cultivable in full sun in the tropical, subtropical and marginally temperate warm climate zones, where temperatures around the 0 °C are exceptional events and very short lasting. Utilized traditionally in the tropical countries at the margins of cultivated fields as anti-intrusion barrier for herbivores, seen its poisonousness, but also for the consolidation of soils and for the oil extracted from the seeds, employed for fabricating soaps, lubricants, dyes and paints and in the illumination and that has, as already said, huge potentialities as biofuel.

All the plant is highly poisonous, in particular the seeds that contain the 30-40% of oil, composed mainly by oleic, linoleic, palmitic, stearic and palmitoleic acid, powerful purgative, but that may cause serious irritations to the gastrointestinal tract and poisonings. Some varieties have been selected with a reduced contents of toxic substances in the seeds that allow to consume them boiled or roasted and of utilizing the by-product of the oil extraction in the animal feeding, whilst normally their accidental consumption causes poisonings and even fatal cases have been reported.

All parts of the plant are variously used in the traditional medicine for different pathologies.