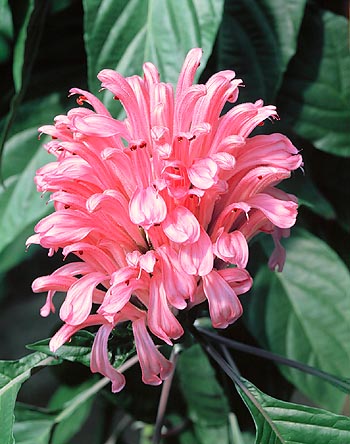 The Justicia carnea Lindl. (1831) is native to Brazil, Argentina and Paraguay.

The genus is honoured to the Scottish botanist James Justice (1698-1763); the name of the species comes from the Latin “caro, carnis” = meat, with reference to the colour of the flowers.

Fast growing evergreen shrub, tall up to 1,5-2 metres, with an erect and ramified herbaceous stem, and lance-shaped dark green leaves, long up to 20 cm and 5 cm broad, with evident veins. Terminal inflorescences, great, showy, formed by many tubular pink flowers, in various tones, long about 6 cm, with bilobed corolla, the upper petal is erect and bent on the apex over the anthers, the lower one is bent almost at a right angle with a curved hooked extremity. The fruit is a capsule containing up to four seeds, but the plant does seldom fructify in cultivation. It easily reproduces by cutting with bottom heat in spring.

Plant of great landscaping interest for the tropical and subtropical climates, not only due to its intrinsic aesthetic characteristics, but also because it is one of the few shrubs which can be utilized in shady locations, as this is really its best position. For the same reason, it is utilized, in pot, for decorating indoor spaces, where, thanks to its flowers, it gives a lively touch of colour; for this purpose, they have selected varieties with a compact appearance and reduced dimensions.

It prefers sub-acid or neutral soils, well drained, rich of organic substance and regular watering; timely pruning by early autumn are useful for maintaining a compact look and for stimulating a copious blooming.