Kangaroos: as tall as a rabbit … or as a man

Everything about kangaroos, barely taller than a rabbit, or as tall as a man. Their life in the pouch. 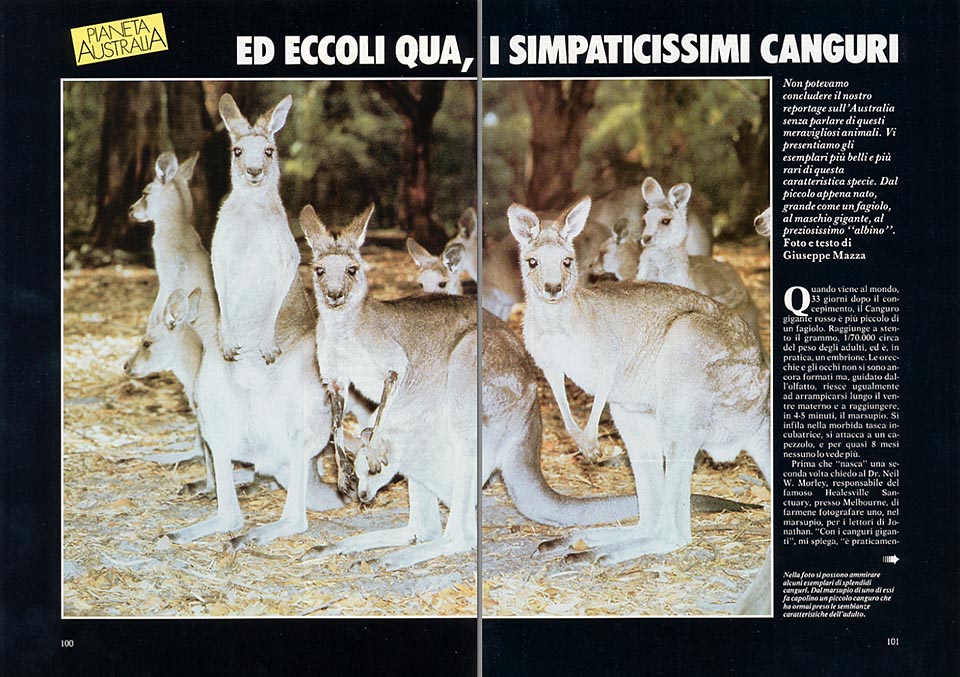 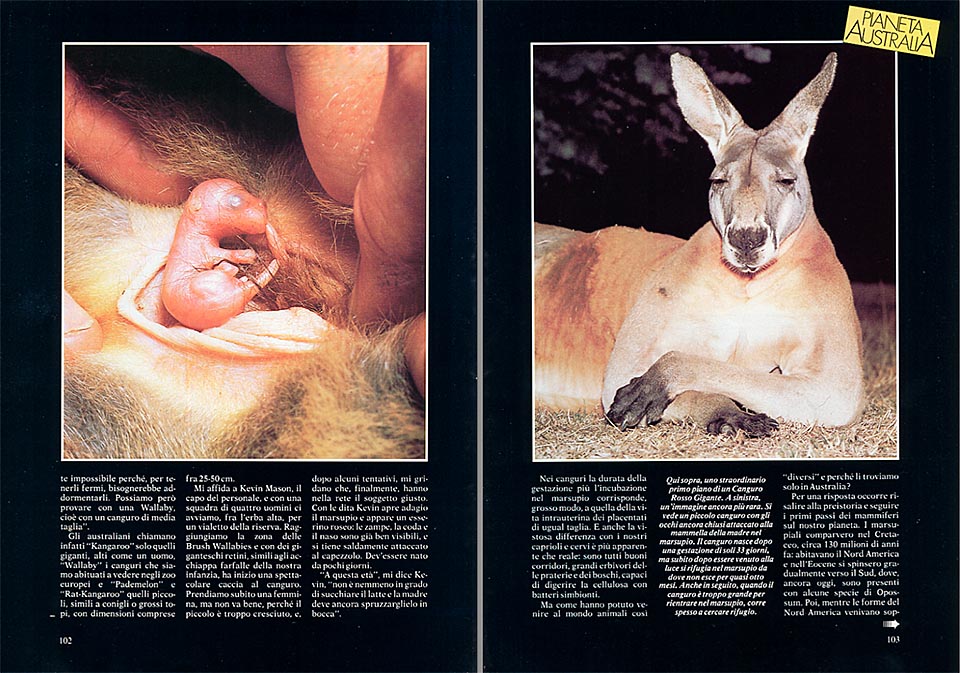 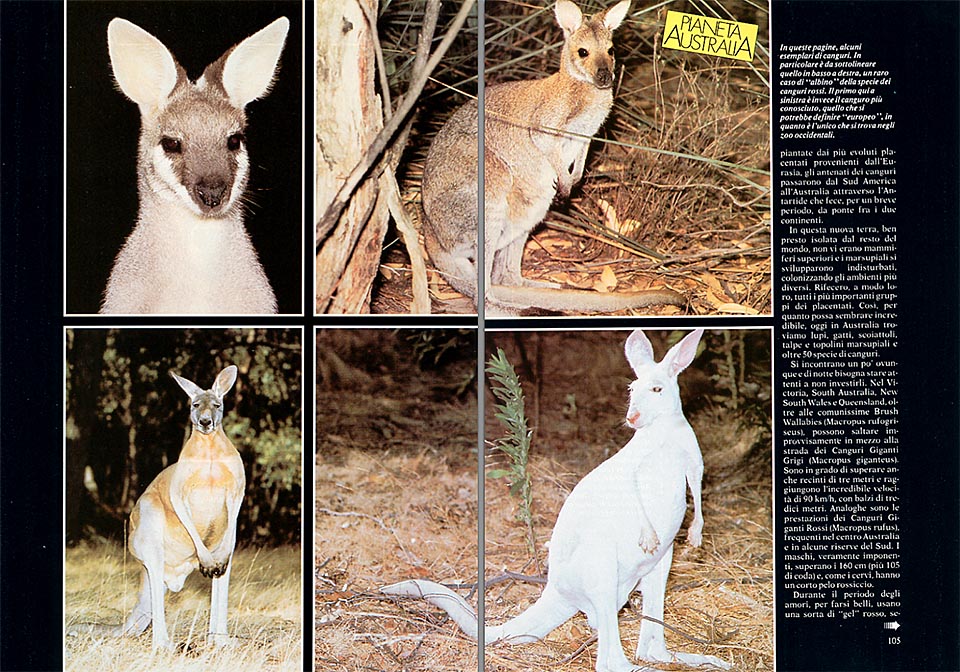 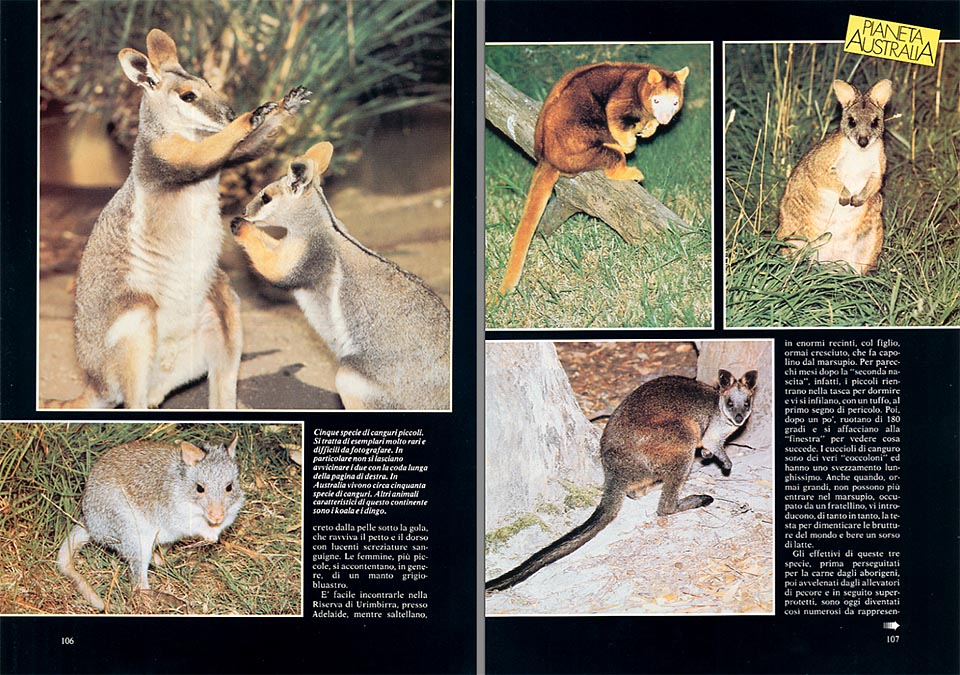 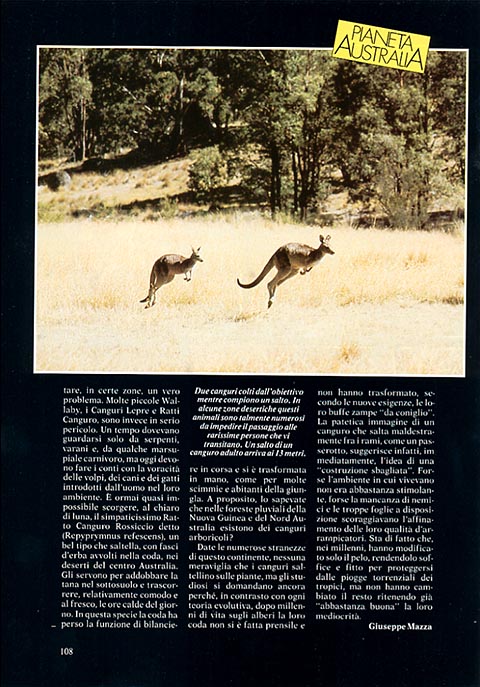 At the time of its birth, 33 days after the conception, the Red Giant Kangaroo is smaller than a bean. It reaches the weight, even if with difficulty, of one gramme, about 1/70000 of the adult’s weight, and is, practically, an embryo.

Ears and eyes are not yet formed, but, guided by the smell, is able, nevertheless, to climb along the maternal belly and reach, in 4-5 minutes, the marsupium. Then, slips into the soft incubating pouch, sticks to the nipple, and then, for almost 8 months, nobody can see it any more.

Before it “comes to life” a second time, I ask Dr. Neil W. Morley, responsible of the famous Healesville Sanctuary, close to Melbourne, to let me photograph one, inside the marsupium.

“With Giant Kangaroos”, he explains to me, “It’s practically impossible, because, to keep them steady, we should have to anaesthetize them. But, we can try with a Wallaby, which, is of a medium size.”

Australians, in fact, call “Kangaroo”, only the giant ones, as tall as a man, “Wallaby” the kangaroos we are used to see in the European zoos, and “Pademelon” and “Rat-Kangaroo”, the small ones, similar to rabbits or big rats, with dimensions between 25 and 50 cm.

He entrusts me to Kevin Mason, the boss of the personnel, and with a team of four men, we set out, in the high grass, along a path of the reserve.

We reach the area of the Brush Wallabies and with gigantic nets, similar to those, smaller, used in our childhood to catch butterflies, we start a spectacular hunt to the kangaroos.

We catch immediately a female, but it’s no good, as the baby has grown up too much, and, after some more attempts, they shout at me that, at last, they have the right subject in the net.

With his fingers, Kevin opens slowly the marsupium, and a pinky small being appears. The paws, tail and nose are already well evident, and it keeps itself firmly attached to the nipple. It must be born a few days before.

“At this age”, says Kevin, “It’s not even able to suck the milk, and the mother is obliged to spray it in the mouth.”

For the kangaroos, the duration of pregnancy, plus the incubation in the marsupium, corresponds, more or less, to the intra-uterine one of the placentals of the same size.

And also the showy difference with our roe-bucks and deer, is more seeming than real: they are all good runners, great herbivores of the meadow-lands and the woods, able to digest the cellulose with symbiotic bacteria.

But, how animals so “different”, could come to life and why do we find them in Australia only?

For getting an answer, we must go back to prehistory, and follow the first steps of the mammals on our planet.

Marsupials did appear during the Cretaceous, about 130 millions of years ago: they lived in North America, and during the Eocene they moved gradually towards the South, where, till now, some species of Opossums are present.

Then, while the North American forms were replaced by more developed placentals, coming from Eurasia, the ancestors of the kangaroos moved from South America to Australia, passing through the Antarctic continent, which was connecting, for a short period, the two continents.

In this new land, soon isolated from the rest of the world, the were no superior mammals, and so marsupials grew up, undisturbed, colonizing the most various areas.

Somewhat, they repeated, in their own way, all the most important groups of placentals. So, even if this can seem incredible, today in Australia we find wolves, cats, squirrels, moles and small marsupial mice, and more than 50 species of kangaroos.

You can meet them almost everywhere, and by night, while driving, you must pay attention not to collide with them.

In Victoria, South Australia, New South Wales and Queensland, besides the quite common Brush Wallabies (Macropus rufogriseus), some Grey Giant Kangaroos (Macropus giganteus), can suddenly jump in the middle of the road.

They are able to jump over three metres high fences, and reach the incredible speed of 90 KM./h, with bounds of even thirteen metres.

Similar are the capacities of the Red Giant Kangaroos (Macropus rufus), frequent in Central Australia ans in some reserves of the South.

Males, impressive indeed, can measure more than 160 cm (plus 105 of tail), and, like deer, have a short reddish hair.

During the love season, to get interesting, they use a sort of a red “gel”, secreted by the skin under the throat, which brightens the chest and the back with shining crimson specks.

Females, smaller, usually are satisfied with a grey-bluish mantle.

It’s easy to meet them in the reserve of Urimbirra, close to Adelaide, frisking about, in huge enclosures, with the son, by now grown up, looking out from the marsupium.

For several months after the “second birth”, in fact, the young return to the pouch to sleep, and dive into it at the first sign of danger. Then, after a while, they rotate of 180°, and present at the “window” to see what’s going on.

Kangaroo cubs are veritable pets, and have a very long weaning. Also when, almost adults, they cannot enter any more the marsupium, occupied by a little brother, they introduce inside, from time to time, the head, in order to forget the filths of the world and drink a sip of milk.

The specimen of these three species, before persecuted for their flesh by aborigines, then poisoned by sheep breeders, and finally over protected, have become, nowadays, so numerous to represent, in certain areas, a real problem.

Many small Wallabies, the Hare-Wallabies, and the Rat-Kangaroo, are, on the contrary, in serious danger. Once, they had to take care only of snakes, monitor lizards, or at the worst, of some carnivorous marsupials, but today, they have to struggle against the ravenousness of foxes, dogs and cats, which have all been introduced by men in their habitat.

By now, it is almost impossible to perceive, at the moonlight, the nice reddish Rat-Kangaroo (Aepyprymnus rufescens), a queer chap which skips, with bundles of grass rolled up on the tail, in the deserts of Centre Australia. Grass is utilized for decorating the underground dens and spend, rather comfortable in coolness, the warm hours of the day.

In this species the tail has lost the function of balance for running, and has transformed in a sort of hand, like many monkeys and inhabitants of the jungle.

By the way, did you know that in the rainy forests of New Guinea and North Australia do exist some arboreal kangaroos?

Seen the several oddities of this continent, no wonder that kangaroos jump on the plants, but scholars still study why, in contrast with every evolution theory, after millennia of life spent on the trees, their tail has not become prehensile and they have not modified, following their needs, their funny rabbit-like paws.

The moving view of a kangaroo jumping awkwardly between the branches, like a small sparrow, suggests, at once, the idea of a “wrong construction”.

Perhaps the habitat where they lived was not stimulating enough, perhaps the absence of enemies and the too many leaves available, discouraged the improvement of their climbing capabilities.

The fact remains that, during millennia, they have modified only the hair, rendering the same soft and thick, in order to protect themselves from the tropical showers, but they have not changed the remainder, deeming already “sufficiently good”, their mediocrity.

Kangaroos: as tall as a rabbit … or as a man was last modified: October 22nd, 2019 by Giuseppe Mazza