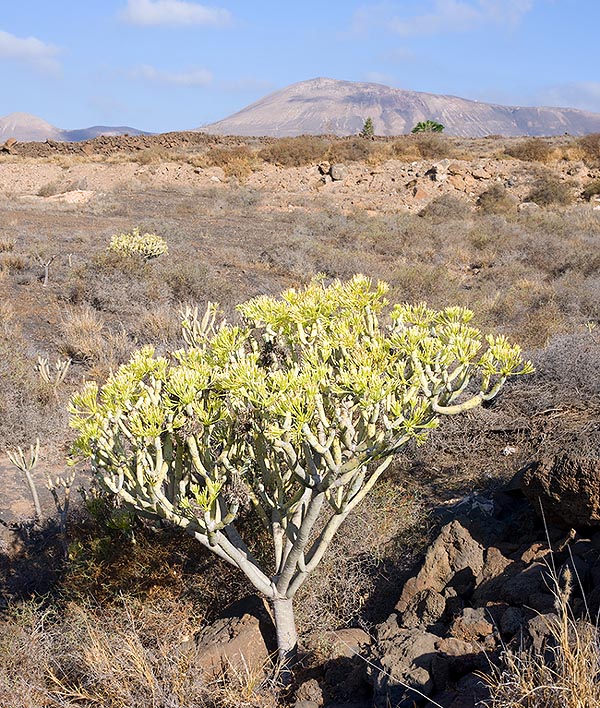 The plant is native to Canary Islands (Spain), where it is quite common in zones characterized by a semi-arid climate, in particular on rocky slopes between the 50 and 1.000 m of altitude, often in association with Euphorbia.

The Kleinia neriifolia Haw. (1812) is a perennial succulent, 2-3 m tall and with a diameter at the base up to about 10 cm, with ramified cylindrical stems, articulated (separated by bottlenecks), of 1-4 cm of diameter, rather frail, of a pale green colour with vertical violaceous streaks converging in the insertion point of the leaves. These are sessile (without petiole), spirally placed and concentrated at the apex of the stems, morbid and succulent, wit a linear to oblanceolate form, 6-15 cm long and 1-3 cm broad, of green grey on the upper side, with purple shades below, and a prominent central nervation. The leaves are caduceus and wither by the beginning of the resting season, the summer, and leave the characteristic permanent scar on the stem.

The inflorescences are terminal, ramified in corymbs, on an about 6 cm long peduncle, ending in flower heads, the typical inflorescence of the Asteraceae, formed by a roundish base, the receptacle, surrounded by an involucre formed averagely by five greenish yellow bracts, 1,5 cm long, on which are spirally inserted 5 to 10 tubular bisexual flowers formed by a corolla formed by five petals joined together of an ivory white colour.

The fruits, containing one seed only and called achenes (or, more correctly, cypselae) in the Asteraceae, are striped, about one centimetre long and surmounted by the pappus, the modified calyx of the flower, which has the function to help the dispersion, formed by a thick tuft of whitish, about 1,5 cm long, hairs. The dried fruits remain on the plant even for more than one year. It reproduces by seed, placed in surface on an aerated and draining ground, with 50% of coarse siliceous sand or agri-perlite, with germination times rather variable, from a few days to 1-2 months or more; it reproduces also by cutting, left to dry up well, in spring, on a sandy substratum, but the rooting is rather slow.

Very characteristic plant for the shape and the colour of the stems, much appreciated by lovers of succulents, which permanent collocation in open air, in full sun and on perfectly draining soils, preferably sandy and stony, it is limited to the zones having a particularly mild climate. It resists, in fact, to high temperatures and to dry periods, but not to the low ones.

Odd looking flowers, with corymbs, which however respect the scheme of the Asteraceae © G. Mazza

It seems that, when dry, it can resist to temperatures as low as -2 °C for a short time, but it is advisable to avoid temperatures around the 0 °C, especially in conditions of high humidity. The watering in autumn-winter, where necessary, must be moderate and spaced, once-twice a month depending on the climate, almost stopped in summer, when, in the wild, it loses the leaves for limiting the evapotranspiration.

The flowers, which appear from late summer to autumn, are slightly and pleasantly perfumed and are very appreciated by the bees.

For the cultivation in pot, necessary where the climate does not allow the permanent cultivation in open air, we have to utilize substrata made very permeable with the addition, around the 50%, of siliceous coarse sand, agri-perlite or other draining material, and we shall have to choose a collocation as more luminous as possible. Any moving in full light, in spring-summer, will have to take place much gradually, in order to avoid anti-aesthetic, permanent, “burns” of the epidermis.

Kleinia neriifolia was last modified: May 8th, 2018 by Giuseppe Mazza