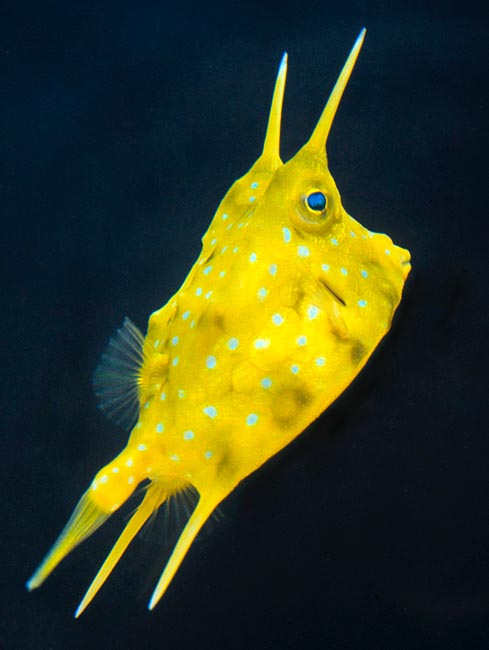 The Longhorn cowfish (Lactoria cornuta Linnaeus, 1758) belongs to the class of Actinopterygii, the ray-finned fishes, to order of Tetraodontiformes and to the family of Ostraciidae, known as Coffer or Boxfishes.

The name of the genus comes from the Latin “lactoria” = pertinent to milk, due to the horns and the squared body which vaguely recall a cow.

The Latin name of the species, “cornuta” = with the horns, underlines this unusual peculiarity.

It is present in the tropical waters of the Indo-Pacific. As an indication, we find it from South Africa and Madagascar to the Red Sea, to the Seychelles, Maldives, India, Sri Lanka, Thailand, Australia, Indonesia, New Guinea, Micronesia, Philippines, Taiwan and China up to southern Japan. Eastwards, it reaches the Marquesas Islands, the Tuamotu Archipelago and, southwards, Lord Howe.

It lives along the sandy coasts and in the madreporic formations up to 100 m of depth, but we find it also in the harbours and in the brackish waters of the estuaries, frequented especially by the juveniles.

The Longhorn cowfish has a roughly trapezoidal sectioned body, which progressively reduces towards the tail.

It can reach the 46 cm of length, and like all boxfishes, it is protected, under the skin, by a carapace, formed by hexagonal plates, with holes for the eyes, the mouth, the fins and the anus. 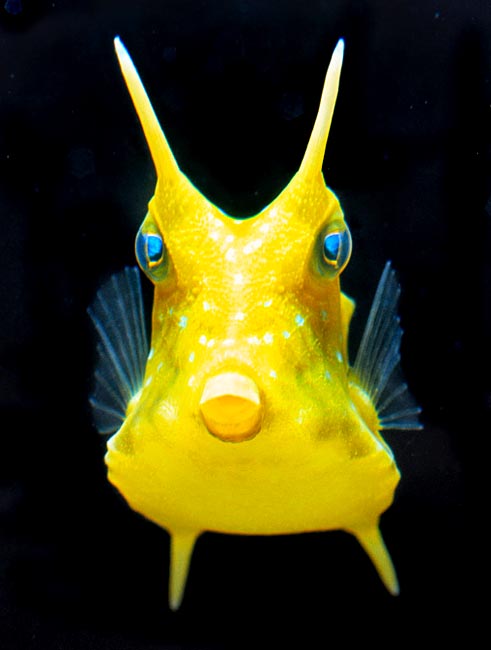 Due to the odd look, the young are much coveted by the aquarists © Giuseppe Mazza

Usually, the colouration is yellow with blue spots, but the background, paler in the young, may get greenish or orange hues. What is more striking, are the two odd bony horns placed over the eyes which have an equivalent on the back. Proportionally longer and more slender in the juveniles, they probably deter the predators. A funny appearance which renders it a prize catch for the aquaria lovers, even if, like the Ostracion, it emits deadly toxins for the other fishes in the pool if it dies or if it is repeatedly disturbed.

The Longhorn cowfish has a mainly carnivorous diet. It frequents the submarine prairies looking for small benthic animals and removes with powerful jets of water from the mouth the sandy and detrital bottoms to flush out the preys. Small molluscs and crustaceans are its daily bread, and therefore there are usually no problems for its alimentation when in captivity, but it is better to keep it alone, because when other fishes are present it is not fast enough in catching the food and the continuous stress can empoison the water.

In the wild, the adults, aware of their swimming limits, are usually solitary, shy and very cautious; on the contrary, the juveniles often do live in group. After the marriage, the eggs are entrusted to the currents.

Even if the bigger individuals are at times consumed by the natives with cases of ciguatera, an alimentary intoxication related to the presence of poisonous organisms in their diet, even if the young are fished ruthlessly for the home aquaria or for being dried up and sold as souvenirs to the tourists, this species is by sure not in danger due to its vast distribution and the fact that the populations may double in less than 15 months. The consequent vulnerability index is decidedly low: only 24 per 100.