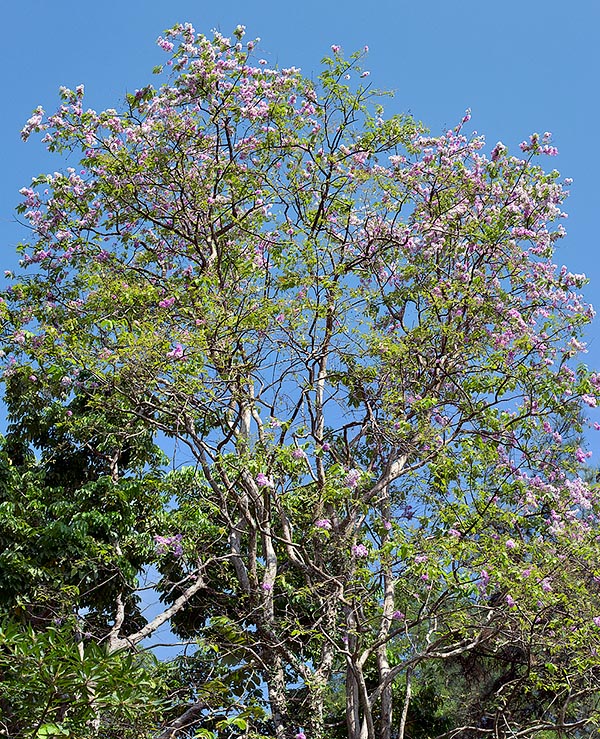 The Lagerstroemia loudonii grows at low altitudes in the mixed forests of Cambodia, Laos and THailand © Giuseppe Mazza

The species is native to Cambodia, Laos and Thailandia where it grows in the mixed forests at low altitudes.

The genus was honoured by Linnaeus to his friend Magnus Lagerström (1691-1759) who was director of the Swedish East India Company; the species is honoured to the Scottish botanist and landscape designer John Claudius Loudon (1783-1843).

The Lagerstroemia loudonii Teijsm. & Binn. (1863) is a deciduous tree up to about 20 m tall, in the old specimens in nature, with trunk with greyish bark fissured longitudinally.

The leaves, on a 0,3-0,5 cm long petiole, are opposite, simple, oblong-elliptic with entire margin and pointed apex, 5-20 cm long and 4-8 cm broad, glabrous above, pubescent below.

The blooming occurs during the dry season, from February to April, with panicle axillar and terminal inflorescences, 10-30 cm long and of 10-20 cm of diameter, carrying several hermaphroditic flowers, of 6-7 cm of diameter, of pale purple colour turning white with the time, with peduncle and pedicels covered by yellowish tomentum.

About 1 cm long campanulate calyx with 6-8 triangular lobes with pointed apex, corolla with 6-8 unguiculate petals (petals with long narrow base similar to a stem) obovate with superior margin fimbriate (fringed) and wavy, about 2,5 cm long and 2 cm broad, and numerous stamina. The fruits are oblong capsules, 1,5-2 cm long and of 1-1,5 cm of diameter, containing nemerous small winged seeds of blackish colour.

It reproduces by seed, previously kept in water for one day, interred superficially in draining loam rich of humus maintained humid, but with no stagnations, at the temperature of 25-25 °C, with germination times of 15-40 days, and also by cutting and grafting. 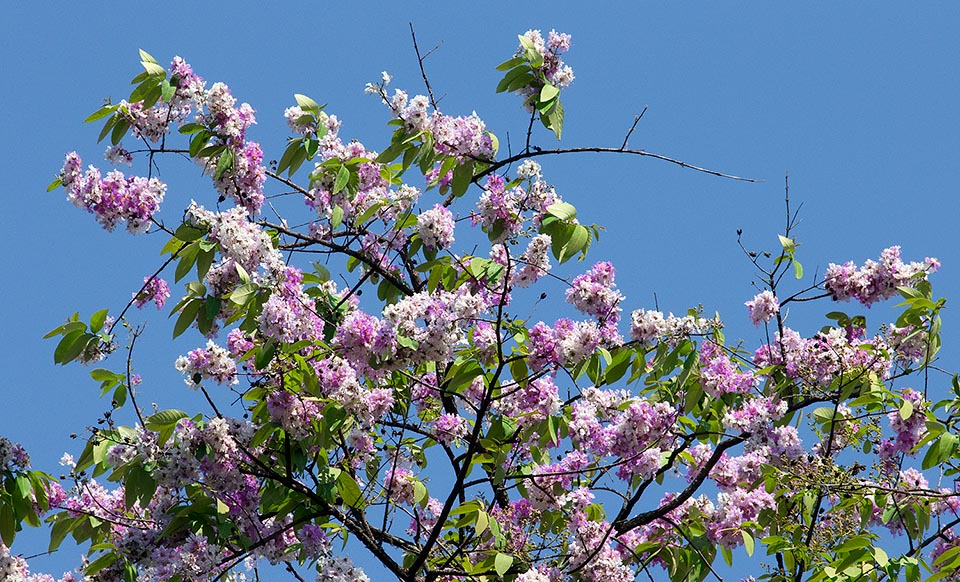 It's an even 20 m tall deciduous tree, that blooms abundantly in the dry season for more than three months © Giuseppe Mazza

Species amply utilized in the urban trees, in Thailand as well as in some countries of South-East Asia where it has been introduced, but little cultivated elsewhere, it would deserve an ampler diffusion, due to the abundant blooming lasting about three months.

Cultivable in the tropical and subtropical clmate countries, with temperatures averagely high, values around the 0 °C, even if exceptional and for short period, cause serious damages to the foliage. It requires an exposition in full sun and draining soils, even rather poor, but grows best in the fertile ones. The waterings must be moderate, not bearing water stagnations, and well rooted can bear dry periods, furthermore has a good resistance to the saltiness and therefore can be employed close to the sea. 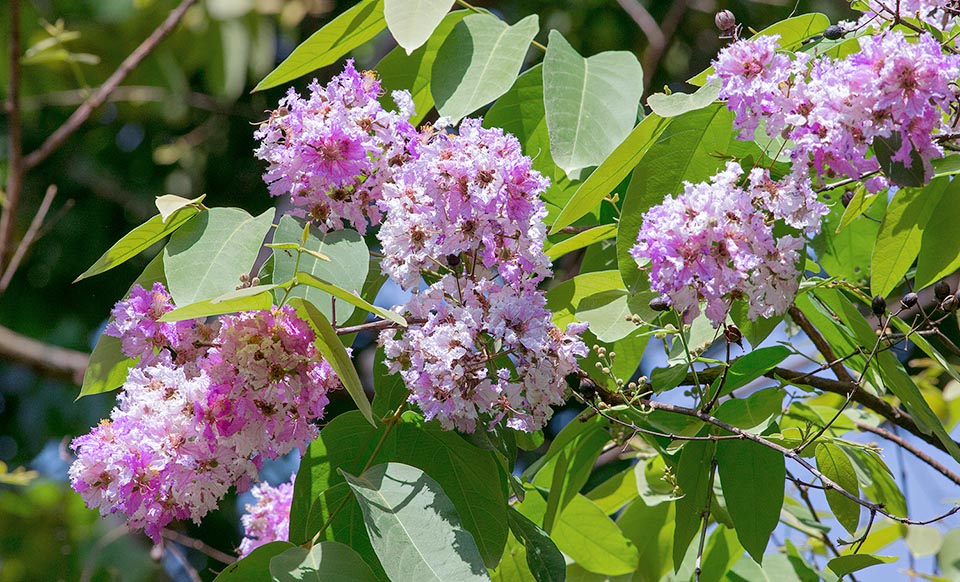 The inflorescences exceed even the 20 cm of diameter. The bark is used in the traditional medicine for treating the diarrhoea and the leaves in the skin ulcerations © Giuseppe Mazza

Outside the tropical and subtropical zones can be cultivated in capacious containers in greenhouses and winter gardens particularly luminous, with lowest winter temperatures above the 15 °C, utilizing a loam rich of organic substance with addition of sand or perlite per a 30%.

Parts of the plant are utilized in the traditional medicine, in particular the bark for treating the diarrhoea and the leaves in the skin ulcerations.

→ To appreciate the biodiversity within LYTHRACEAE family please click here.