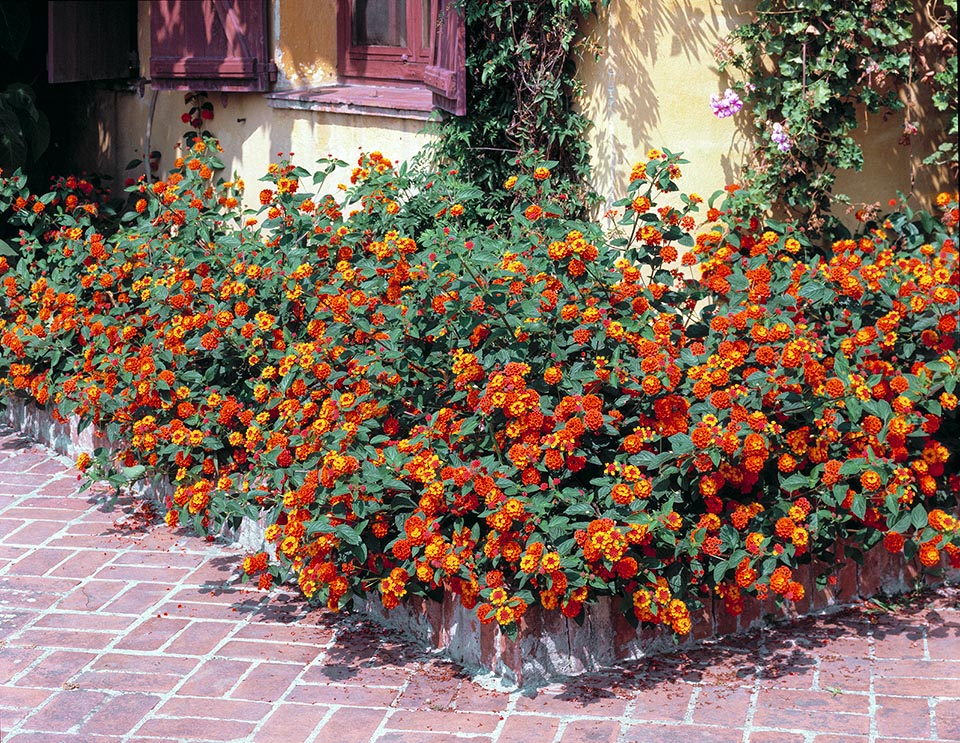 Native to tropical America, the Lantana camara is a shrub that in nature may exceed the 4 m of height and more, leant as climber to other plants. It adapts well to the Mediterranean gardens, where blooms for the whole summer and keeps the foliage in winter, whilst in the cooler climates is cultivated in pot or as annual plant © Mazza

Lantana camara L. is native to tropical America with distribution from Florida to Texas to northern Argentina and to Uruguay, from Mexico, through the Bahamas, Greater Antilles, to north-western South America. Discovered in Brazil by the Dutch physician naturalist Willem Piso (1611-1678), it has been imported in Europe in the most of the XVI and XVII centuries, because it was considered suitable to embellish the gardens. However, due to its massive cultivation, have taken form hundreds of cultivars of mixed descent from the introduced strain, and these cultivars have been diffused and introduced in Australia, India and Africa in the mid of the XIX century.

The generic term Lantana comes from slow bending, curving, and refers to the Latin name of Viburnum lantana, due to the similar structure of the inflorescence. The term camara is the vernacular name used in Brazil for this plant.

Because of the anthropic action, this plant presents as very variable with hundreds of cultivars and hybrids. 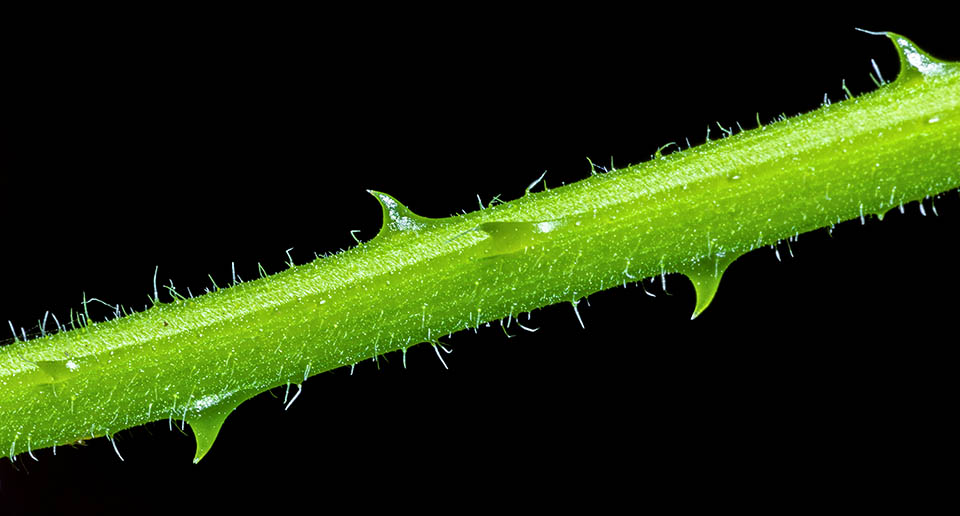 The root system is superficial, formed by a short taproot with lateral roots that carpet spread. The green stems are quadrangular, provided with bristly hairs, often covered by short curved thorns that, together with the height of the plant, the colour and shape of leaves and flower, are one of the distinctive elements of the several cultivars © Giuseppe Mazza

The cultivars can be distinguished morphologically (dimension, shape and colour of the flower; leaf size, hairiness and colour; thorniness of the stem; height and structure of the branches), physiologically (speed of growth, livestock toxicity) and from their chromosome number (2n = 22, 33, 44 and 55) and contents of DNA.

The Lantana camara is a very ramified, deciduous shrub that, in good growing conditions, can reach the 2-4 m of height or more, if it climbs on other plants.

It has a superficial root system formed by a short taproot with lateral roots branching out to form a carpet of roots. The stems are quadrangular and, when green, provided with bristly hair, often covered by short, curved thorns. 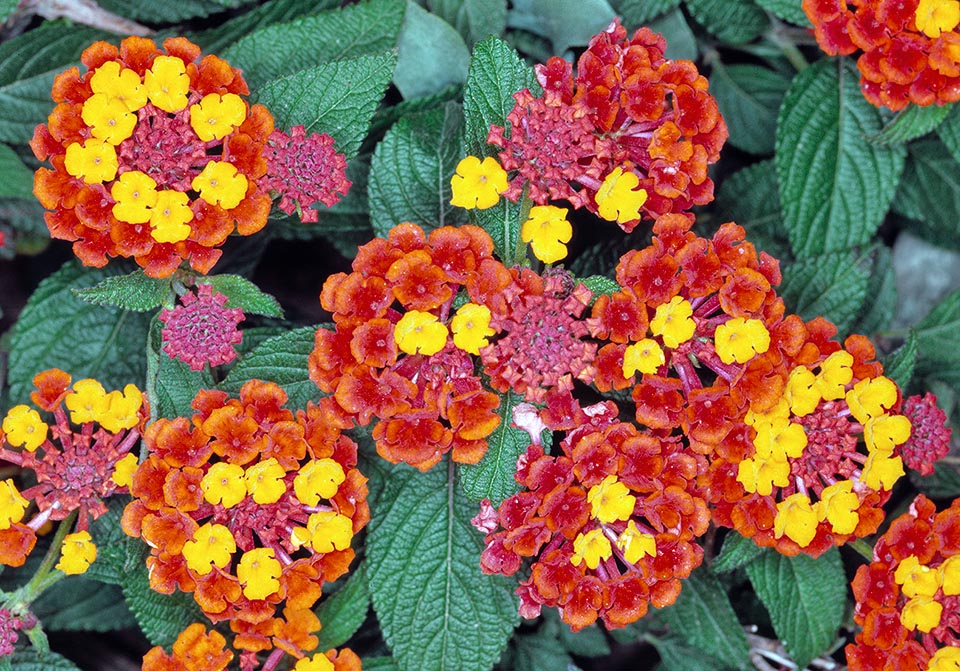 Due the incredibly fast growth and the ample ecologic tolerance, in some sites has become infesting, thus to appear in the list of the 100 alien plants most invasive of the world. But if in South Africa they try to contrast it by any means, the horticulturists, pushed by the easy cultivation and the undoubtful beauty, have created several varieties © Giuseppe Mazza

The leaves are opposite, simple, with up to 2 cm long petioles and laminae having ovate to lanceolate toothed margins, rough, hairy, up to 10 cm or more long, and 6 cm broad. Usually, they are of bright green colour on, the upper pagina and green and hairy on the lower one. If wrinkled, they give out an acrid and pungent odour. We have to point out that the colour, the size and the shape of the leaves, depend on the variety and on the availability of water and of light. 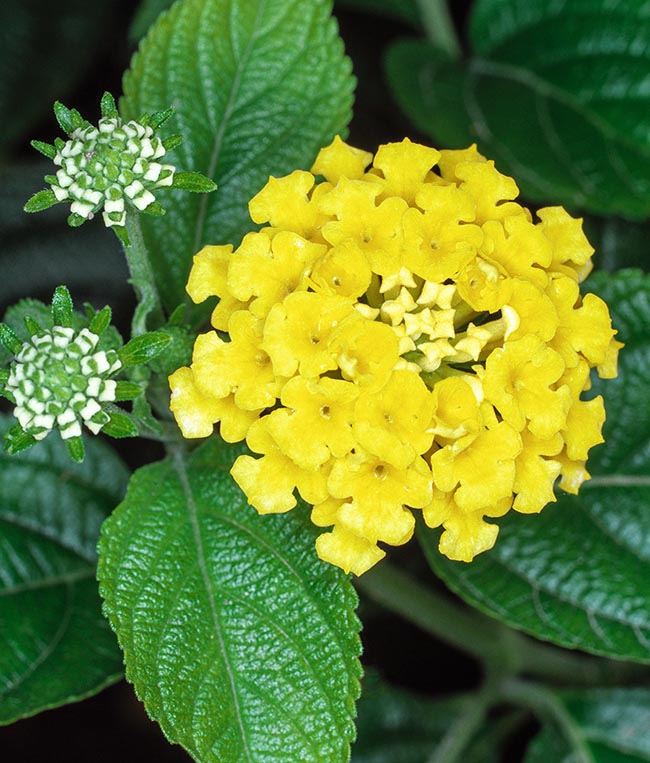 The flowers are small, pedunculate, with tubular corolla having 4 short lobes, that issue a particular sourish odour. The flowers are arranged in corymbs of the diametre of 4 cm and open from the outside towards the centre of the inflorescence.

In each single corymb we can observe 20 to 40 flowers of variable colour, white to pink or lavender, yellow to orange or red, and, at times, the colour changes during the development.

Recent studies indicate that the colouration of the flowers of Lantana camara is due to pigments identified as delphinidin monoglucosid and β-carotene, and these antochyanins take form once the pollination has occurred.

As a matter of fact, the latter causes the immediate synthesis of antochyanins that mask the carotenoides of the just opened flowers by changing their colour.

All this occurs because the pollinating insects, that are thrips, are attracted only by yellow flowers and by others having other colours, in this way the chromatic changes play a rôle in avoiding waste of pollen.

The fruits are fleshy drupes with 2 seeds, of about 5 mm, initially green then blue, to finally become dark violet when the ripening is completed.

During the centuries this species has had a vast and different geographical distribution and this has been possible due to its ample ecological tolerance. As a matter of fact, it presents in different habitats and on a variety of types of soil. It does not invade the virgin pluvial forests, but enters the natural forests disturbed by deforestation. It can be found in wastelands, the margins of the pluvial forests, in the beaches, in the agricultural areas, in the prairies, in the riparian belt, in the thicket, in urban areas, but also in the borders of the road.

In the tropical areas it can push up to almost 2000 m of altitudes. Because of this the L. camara is considered as infesting more than an ornamental plant. Moreover, the plant is very toxic for grazing animals. In fact, the ingestion of 300-400 leaves causes damages to the liver and to the kidneys, photosensitization, intestinal hemorrhoids, paralysis of the gallbladder, and 1-4 days bring death to the sheep and cattle who have eaten it. The ripe fruits are edible, but the still green and premature ones have caused diseases and mortality in the children.

All this has led to campaigns aimed to limit the diffusion of this plant. In South Africa, from 1961, various methods have been used to limit the presence of L. camara. They go from biological control with the utilization of natural foes such as the moths eating the leaves, Lantana defoliator Hypena laceratalis Walker and Catabena moths Neogalea sunia Guenée or diffusing the fly Ophiomyia lantanae (Froggatt) that attacks the fruits of the Common lantana, or the hemiptera Falconia intermedia (Distant) who nourishes of the leaves. However, those methods were not always successful because the plant often uses defensive strategies (more coriaceous leaves, increase of hairiness, fast formation of new leaves). 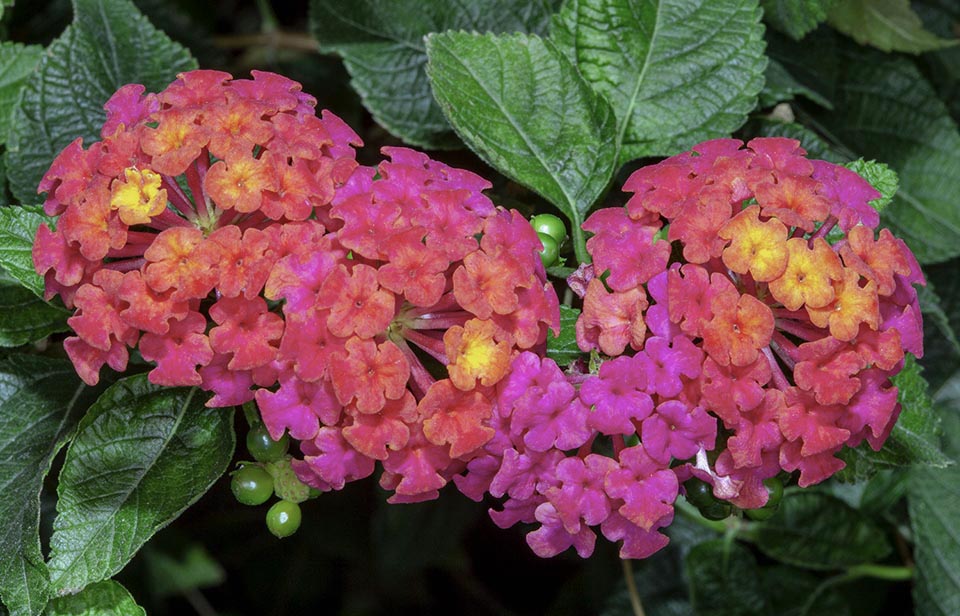 Recent studies indicate that Lantana camara flowers colouration is due to pigments identified as monoglucosid delphinidin and β-carotene that form due to the pollination. This causes, in fact, the immediate synthesis of antochyanins that mask the carotenoides of the just opened flowers making red hues to appear to avoid wastes of pollen. The pronubial insects are in fact thrips attracted only by the yellow flowers. The red flowers do not need them any more, and so they will move to other inflorescences © Giuseppe Mazza

Besides the biological control methods, have been also utilized other methods either chemical (desiccants) or physical (eradication, fire, etc.), they too are not completely definitive. More recently, have been released in the market sterile plants to avoid their accidental diffusion.

Due to the high environmental hazard, the group of study about the invasive plants of the IUCN (International Union for the Conservation of Nature) has inserted it in the document: 100 of the World’s Worst Invasive Alien Species that includes the worst invasive allochthonous species of the world being considered as very harmful.

Nevertheless, L. camara also produces a series of secondary metabolites having useful biological activity, in particular essential oil, due to the antiparasitic, antibacterial, antimycotic properties. In fact, in these essential oils, among the main compounds, have been found the sabinene, the germacrene, the bicyclogermacrene, the zingiberene and the oxide of caryophyllene. The production of particular allelopathic, substances, in the roots as well as in the buds, has raised the interest for the utilization of the large biomass available of this plant for the applications of these substances for the natural control of the grass and with the possibility to reduce the use of chemical herbicides still now amply utilized in agriculture and that often represent risks for the consumer’s health. 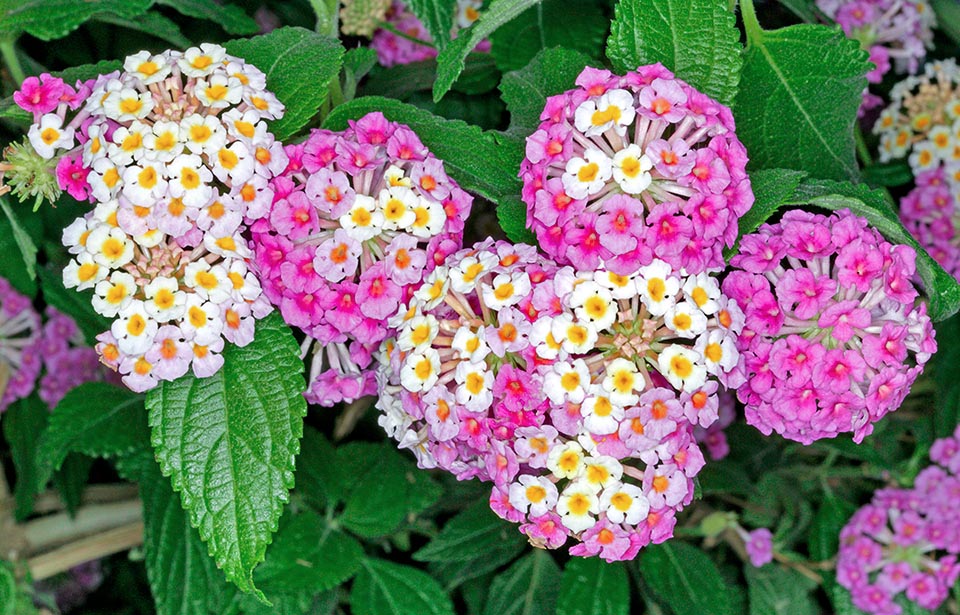 Where it has naturalized, the leaves are poisonous for grazing cattle; in the gardens the unripe fruits have sometimes caused diseases and death in children, but is also a promising medicinal plant, used since centuries in the tropical popular medicine for various pathologies, and could give, with its biomass, ecologic herbicides © G. Mazza

The L. camara has met a wide use in popular medicine. In central and southern America, the leaves were transformed in a poultice to cure sores, chickenpox and measles. In Ghana, the infusion of the whole plant was utilized for the bronchitis, whilst the root was administered to children, in the powdered milk, for the stomach pain. In the Asian countries, the leaves were utilized to treat cuts, ulcers and as vermifuge.

Decoctions have been applied externally for leprosy and scabies. It has been ascertained that the steroid, the lancamarone, extracted from the leaves, displaying cardiotonic properties and the lantamina, alkaloid coming from the bark of the stems and from the roots, presenting antipyretic and antispasmodic properties similar to those of the quinine. From the leaves of L. camara has been isolated an alkaloid fraction that lowers the dogs blood pressure, breathing and causes deep chills. This has led to the hypothesize its possible utilization to reduce the fever and as treatment of asthma and hypertension.

L. camara is easily cultivated in deep ground as well as in pots. It loves humid, but well drained, soil, in full sun and sheltered from frost. 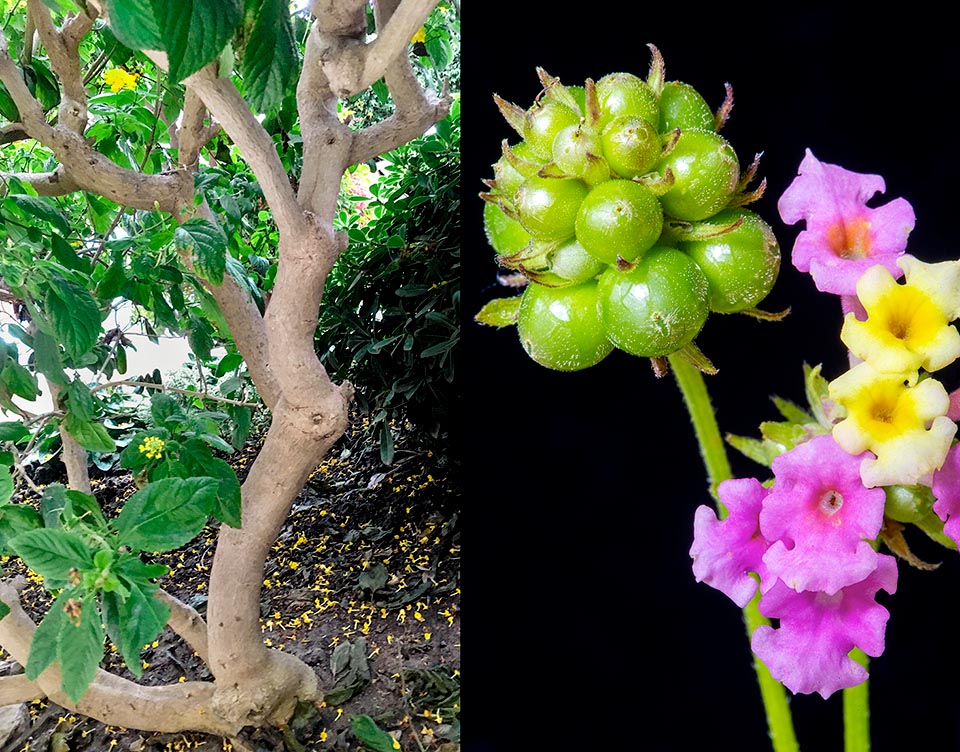 Detail of the branched woody stem up to 15 cm in diameter. To the right flowers and green growing fruits. They contain two seeds and ripening become blue then dark violet. This is the time to harvest to sow the seeds in February at 16 °C, if we do not prefer to multiply the plant with summer cuttings in August © Giuseppe Mazza

A fertilization is opportune by the vegetative restart every 15 day until summer’s end, with a fertilization for flowering plants. The fertilization stimulates the vegetative growth and the forming of large and very coloured inflorescences. In autumn it is good to do a slight pruning shortening the branches by about one third, to favour, in spring, a thicker and more compact vegetation.

In the temperate climates, many hybrids and varieties of L. camara maintain the foliage even in winter. For the plants cultivated in pots, it is good practice that this is done in at least 30 cm deep pots and that at every spring a repotting is done to allow the development of the root system. As cultivation soil it is possible to use universal loam mixed with garden loam and it is a good practice to put on the bottom of the pot some draining material (fragments of earthenware, expanded clay, etc.) to avoid water stagnation.

It multiplies by seed in February, in bowls placed in pallets at the temperature of 16 °C, or in August by cutting. The young 7-10 cm long branches are placed to root in boxes at the temperature of about 20 °C and later on are to be transferred in small pots to get stronger until February-March, from where they will be placed in their final residence (pot or ground). 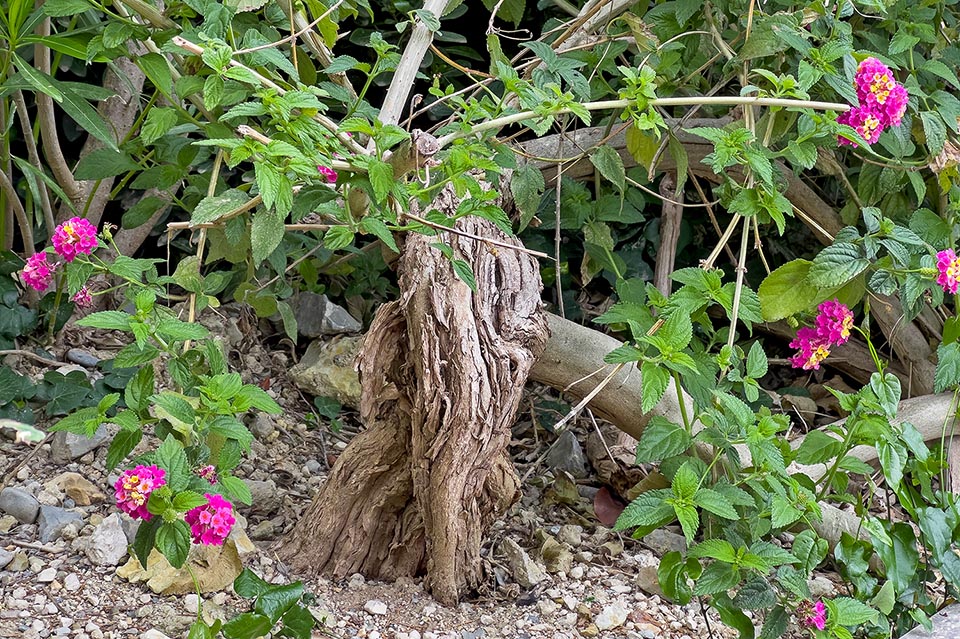 Old specimen with a particularly developed unusual basal trunk, if we think that the inflorescences have a 4 cm diametre © Giuseppe Mazza

It is a rustic plant hardly attacked by the aphids and scale insects because its leaves behave as natural repellents against these parasites. Hence, it is suitable for keeping far away mosquitoes and other annoying insects. However, it may be subject to attacks of the whitefly (fam. Aleyrodidae) who, nourishing of the leaves, causes the yellowing and the formation of the honeydew that, in turn, exposes the plant to fungal attacks such as the sooty mold.

Lantana camara was last modified: May 8th, 2022 by Giuseppe Mazza