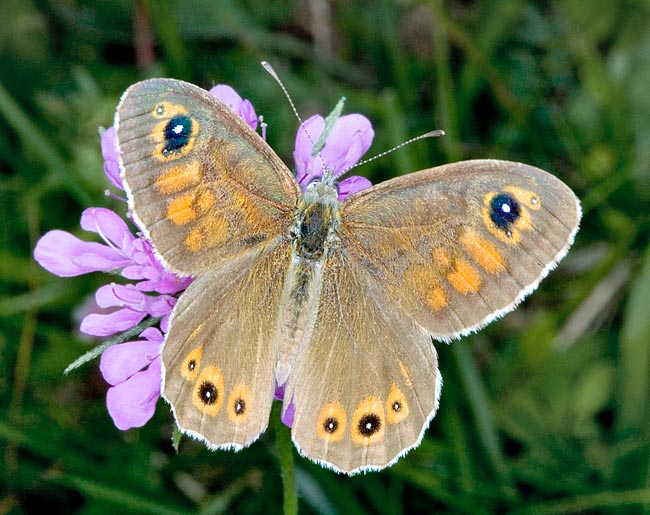 The Large wall brown (Lasiommata maera Linnaeus, 1758) belongs to the order of the Lepidoptera, to the family of the Nymphalidae and to the subfamily of the Satyrinae (time ago it was placed directly in the family of the Satyridae) a group of butterfly commonly called by the British the “brown”, as it includes inside it lepidop- terans usually of this colour. It is a widely diffused butterfly, but never present in large number.

It has a swift and sudden flight and often takes from the ground at a very close distance, when laying hides completely the fore wings behind the back ones, limiting the profile on the ground and hiding behind pebbles or small stones, becomes practically invisible as assimi- lated to the surrounding soil. It lives in dry habitats, so that in Spain is called “Pedregosa” rightly for the stony habitat it frequents. In England is called “Large wall brown”, in Holland “Rotsvlinder”, in Germany “Rispenfalter” or “Braunauge” and in France with two names, one for the male, “Némusien” and one for the female “Ariane”.

The etymology of the scientific name inevitably refers to the Greek mytology. The genus Lasiommata comes from the Greek “lasios” = hairy and “ommata” = eyes, as this butterfly has the eyes covered by down, whilst the species maera comes from the name of the faithful dog of Ikarius, first inhabitant of Hellas.

Dionysus (Bacchus) taught Ikarius the art of winemaking but when he made the inhabitants of his land to taste the wine, these ones, drunk, killed him thinking of having been poisoned. The daughter Erigone looked in vain for the body of her father till when the faithful dog took her to his tomb. Once she found it, desperate, hanged herself whilst the dog, in turn, deliberately threw itself in a well. Jupiter, moved by this story, put the three souls in the firmament, in fact, Ikarius is in the constellation of Boötes, Erigone in that of the Virgo and Maera, the dog, in that of Canis major. Someone has even thought to a wordplay where should have been involved Linnaeus with the Greek term “maero” = to grieve, to umbrage, referring to the dimmed and faded colour of this butterfly, but knowing the predilection the naturalist has for the Greek mythology, the first version has been finally accepted. 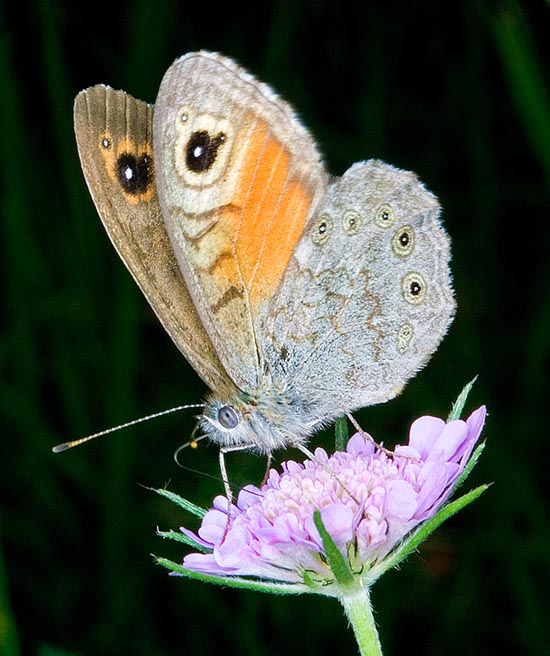 Lover of sunny and stony places, lawns and shrubs, the Large wall brown is found in the plain but it can be easily met also over 2000 m of altitude and accidentally up to 3500 m © Giuseppe Mazza

When the wings are folded, the large wall brown is very similar in colour and shape to its congener Lasiommata megera even if are found consistent differences upon a thorough analysis.

The Lasiommata petropolitana, once considered as a subspecies of the Lasiommata maera, lives in the northernmost ranges, overlapping with the large wall brown in vast areas. Particularly similar and distinguishable only by some particulars of the verso of the lower wings and of smaller size.

The large wall brown lives in a vast area that from Europe and North Africa reaches Siberia and the Tienshan mountain range in China. In Europe, is absent in the northern regions, in England and in the north of the Scandinavian Peninsula and in most of the Mediterranean islands.

It is a typical Palaearctic butterfly present in the plain, mid-hill and also on the Mediterranean coasts but loves to live in arid and rocky zones or in rugged terrains. We find it in sunny, stony places and in lawns with weeds.

It loves very much the stony slopes of the mountains and can be easily met over the 2000 m and accidentally up to 3500 m.

As a matter of fact, it seems that this butterfly loves much to reach high altitudes during the warmest days, even if these places are unsuitable for its usual necessities.

The large wall brown is a butterfly of good size reaching at times the 60mm of wingspan. In the male the upper face of both wings is of a diffused uniform brown colour with various ocelli that may often vary.

On the apex of the fore wings it has a big black ocellus with double white pupil, of which the second one is hardly perceptible, inserted in a short orange belt that occupies part of the post-discal area.

The lower wing is outlined by a short series of two or three much more reduced ocelli, always black and with white pupil. The female is much more coloured having the fore wing almost totally of orange hazel colour with a double black ocellus, fused together, but bigger than in the male and always with two well visible white pupils. On the fore wing the female has also some dark streaks crossing the orange background. 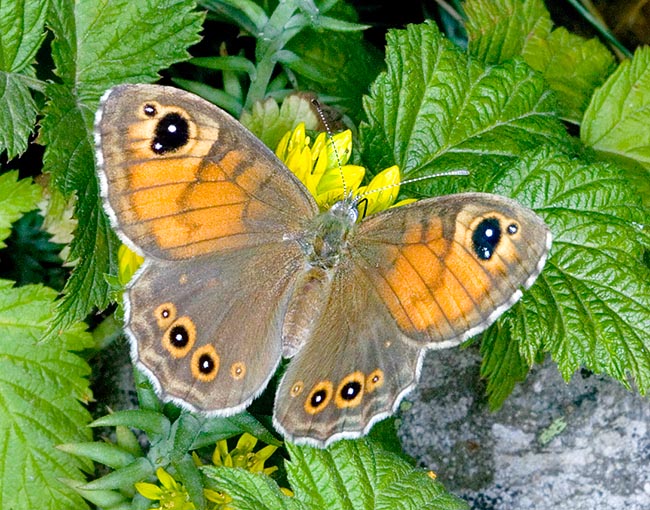 The fore wing verso is the same in both sexes and reflects exactly the drawings and the colours of the front, whilst the lower wing has grey brown streaks with a series of perfectly round ochre ocelli with small black pupil.

The antennae are robust and clavate, outlined in black and white.

It is a monovoltine butterfly in the north of its range whilst in the south has two generations the second of which with smaller specimens.

It flies May to October and is well diffused but, as already said, never in consistent number.

It loves sucking the flowers of Asteraceae but does not disdain other essences especially if with big and well evident inflorescences.

It moves from a flower to another with very short stops and alternating the activity with rests on the ground in a well camouflaged position.

During the central hours of the warmest days prefers staying in the shade probably to avoid the strong insolation.

Usually the eggs are laid singly and occasionally in pair directly on the hosting plant. The caterpillar is pale green with a slight whitish line along the whole body. The chrysalis is also green with a tiny yellowish white dotting and is placed at the foot of the host plant. The first generation has an incubation period of about three weeks. It hibernates as caterpillar, on the ground at the foot of the host plant, among the debris of the withered plants. The host species usually belong to the family of the Poaceae with preference to the genera Festuca, Agrostis, Hordeum and Glyceria.