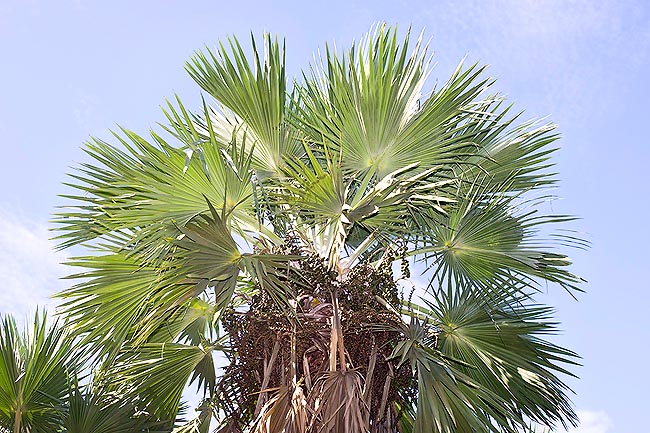 The name of the genus comes from the French corruption, latanier, of the native name; the species is honoured to Joachim Loddiges (1738-1826), of German origin, who, founded a famous vivarium in the neighbourhood of London, and was the first to introduce in Europe a large number of exotic plants.

The Latania loddigesii Mart. (1838) is an endemic plant of a little island, the Ile Ronde (Mauritius), where its population, at risk of extinction because of the exiguity of the territory, has recently increased thanks to the institution of a natural reserve. The climate is characterized by marked seasonal traits, with warm and rainy summers and dry winters.

Palm with solitary trunk, tall up to more than 10 m and a diameter of 25-30 cm, bulged at the base, of dark grey colour, marked by the reddish scars of the fallen off leaves. 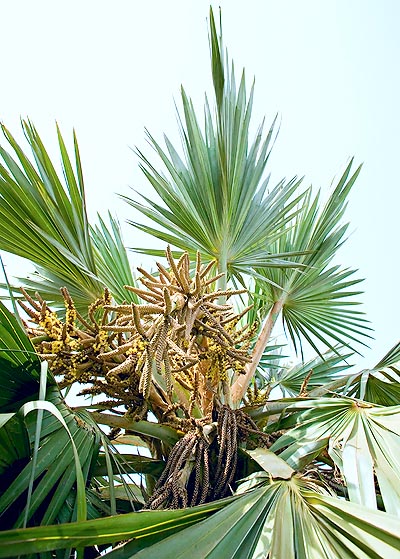 The leaves are conspicuously costapalmate, about 1,5-2 metres wide, with rigid and sharp segments.

This plant has the peculiarity of showing a different look and colouring of leaves and petiole, depending on the age.

The young plants have a reddish coloured petiole, especially on the margins, as well as the nervation of the leaves and the borders of the segments. Furthermore, the lateral edges of the leaves and of the single segments show a light indention, just suggested on the petioles. With the age, the petiole often covers with a thick white tomentum, and the leaves become of a showy bluish-grey colour.

Dioecious plant (each individual carries only male or female flowers), it shows short and ramified male inflorescences, whilst the female ones are longer and simpler, the flowers being of a yellowish brown colour.

The ovoidal fruits, about 6 cm long, are of a grey-green colour, tending to the brown when ripe and contain, in general, three seeds, which germinate in about 30 days if fresh and with bottom heat.

It is a plant of great ornamental value, with a rather fast growth, easily cultivable in the tropical and subtropical zones, in full sun and even in poor lands, provided they are well drained; when adult, it can bear long drought periods. Outside the subtropical areas, the cultivation can be tried in particular favourable micro-climates, as it does not tolerate, unless for very short periods, temperatures of 1-2 °C below zero.