Geraniums, besides the flowers, have also beautiful leaves. Unusual shapes and unexpected colours. Genetic defects or congenital diseases colour them in white, yellow and red variegations. 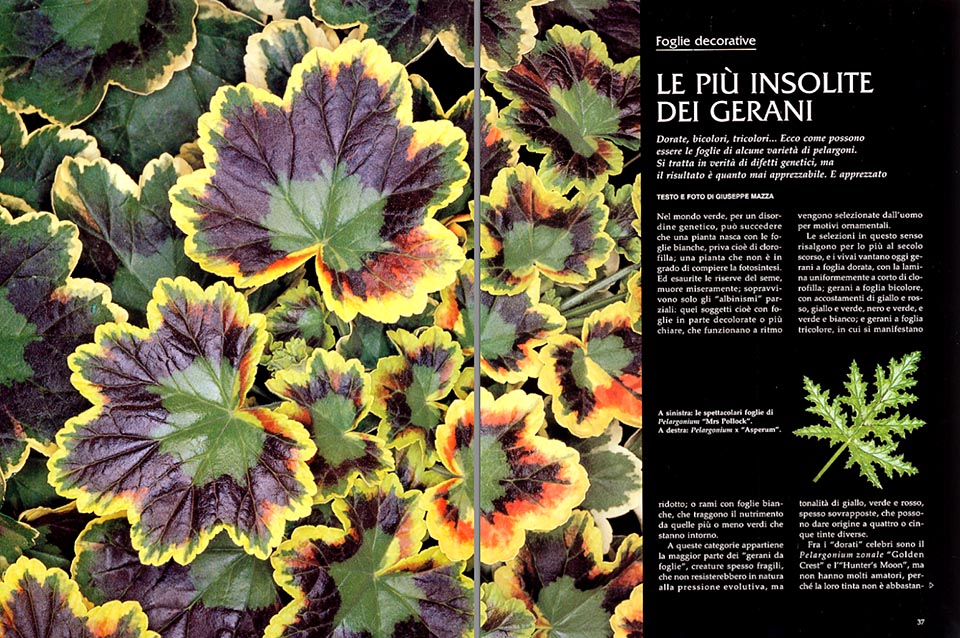 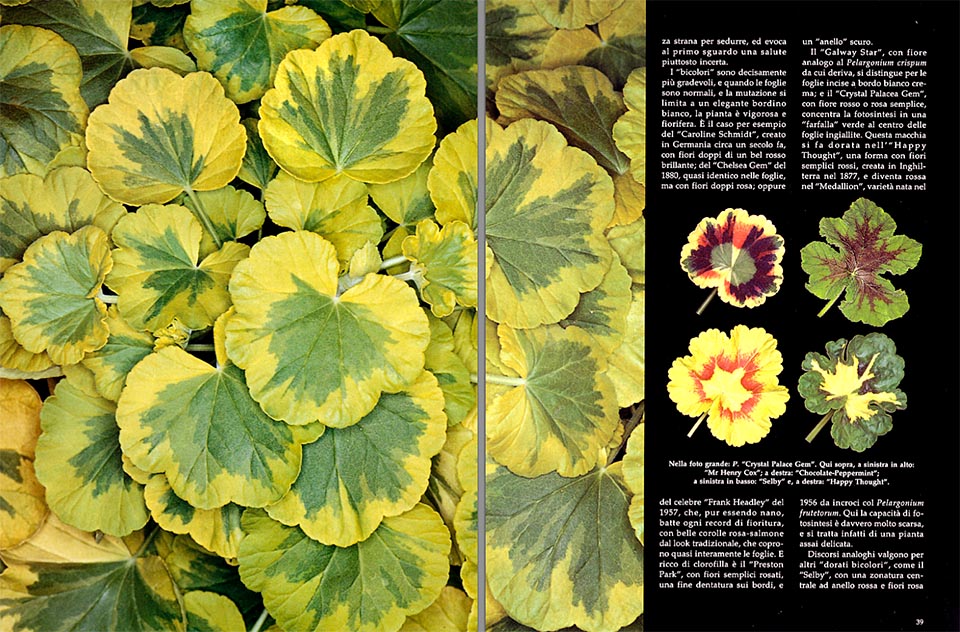 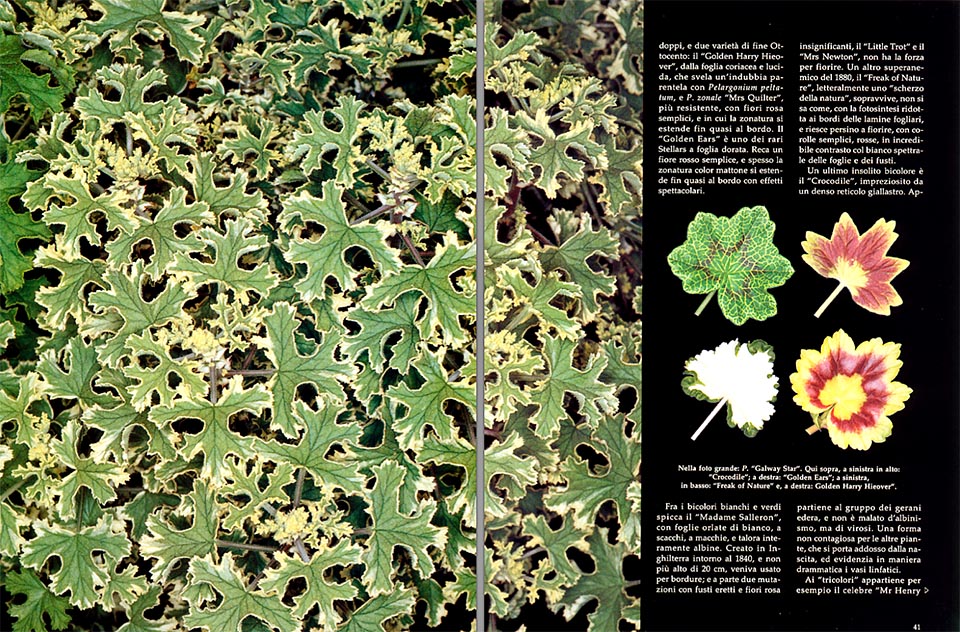 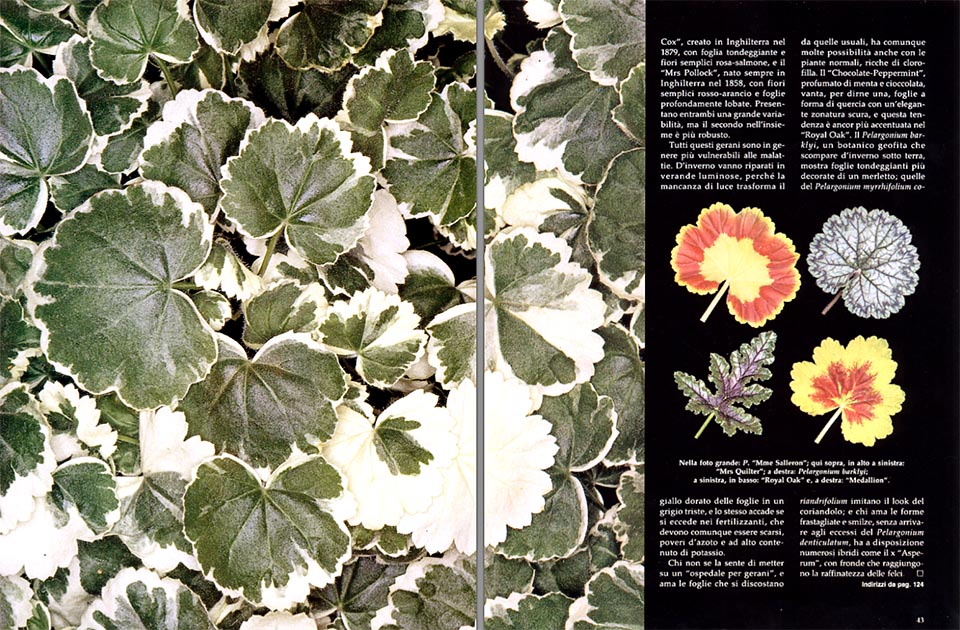 It would not flash to anybody’s mind to organize a “collection of mongoloids”, or of, generally, of beings with congenital malformations, but a frequent impairment of the living beings, the albinism, attracts irresistibly the man, who is, it’s known, looking for “oddities”.

Apart the mice, the hamsters and the rabbits, as white like snow, which have a bad hearing, and even a worse eyesight, with their poor red eyes, where appears all the network of the blood capillaries, due to the total absence of pigments, have come out, in all the world, “zoos for albinos”, and for a white young lion, born recently in South Africa, they have reached a record quotation of 300.000.000 Liras.

In the Green World, the albinism is an even more dramatic event, because if, for a genetic disorder, a plant comes to birth with white leaves, that is, lacking of chlorophyll, is not in condition to effect the photosynthesis,, and, once exhausted all the reserves of the seed, will die, miserably, of hunger.

Only the partial albinisms do survive: subjects with leaves partly bleached or more whitened, which operate at a reduced rhythm, or branches with wholly white leaves, which get, within some limits, the nourishment from the leaves, more or less green, which surround them.

To these categories belong the most of the “leaved geraniums”, often frail creatures, impaired, which would not resist, in the wind, to the evolutionary pressure, but are stubbornly selected, by men, for ornamental purposes.

And if, by chance, a branch regresses to the primary form, if, by a miracle, is able to get over, and to put its chromosomes in order, we find then pitiless manuals of horticulture suggesting to eradicate it, so that the handicap can be handed down, by cutting, with the applauses of the collectors.

Among the most celebrated “golden”, are the ‘Golden Crest’ and the ‘Hunter’s Moon’, but they do not have many lovers, because their yellowish colour, turning to grey, is not strange enough to be alluring, and, at first sight, recalls a rather dubious health status.

The “bi-coloured”, are by sure more pleasant, and, when the leaves are normal, and the mutation is limited to an elegant white small hem, the plant is vigorous and floriferous.

This is the case, for instance, of the ‘Caroline Schmidt’, created in Germany about one hundred of years ago, with double flowers of a nice bright red; of the ‘Chelsea Gem’ of 1880, almost identical in the leaves, but with pink double flowers; or of the well known ‘Frank Headley’, of 1957, which, even if being dwarf, beats every record of flowering, with pink-salmon corollas with a traditional look, which cover the leaves almost completely.

Equally rich of chlorophyll, is the ‘Preston Park’, with pink simple flowers, a delicate indentation on the margins, and an unmistakable dark “ring”.

The ‘Galway Star’, with a flower analogous to the Pelargonium crispum, from which it derives, distinguishes for the engraved leaves with white-cream margin; and the ‘Crystal Palace Gem’, with red or pink simple flower, which concentrates the photosynthesis in a green “butterfly”, at the centre of the yellowed leaves.

This spot becomes gilt in the ‘Happy Thought’, a dorm with red simple flowers, created in England in 1877, and becomes pink in the ‘Medallion’, born in 1956, from cross breeds with the Pelargonium frutetorum.

Here the capacity of photosynthesis is very scanty, and in fact, unluckily, this is a very delicate plant.

Similar remarks do apply also for other “golden bi-coloureds”, such as the ‘Selby’, with a central red ring and pink double flowers zone, and two varieties of the end of the nineteenth century: the ‘Golden Harry Hieover’, with the tough and bright leaf which reveals a sure relationship to the Pelargonium peltatum, and the ‘Mrs. Quilter’, more resistant, with pink simple flowers, and where the zone extends almost up to the border.

The ‘Golden Ears’ is one of the rare “Golden Leaf Stellars”. It carries a red, simple flower, and, often, the brick coloured zone extends almost till the edge, with spectacular effects.

Among the white and green bi-coloured, stands out the ‘Madame Salleron’, with leaves hemmed of white, chequered, and sometimes wholly albinic, on branches which live at the nearby leaves expenses. Created in England around the 1840, and tall not more than 20 cm, was employed for borders; and apart two mutations with straight stems and insignificant pink flowers, the ‘Little Trot’ and the ‘Mrs. Newton’, it has not enough strength for blooming.

Another super anaemic of the year 1880, the ‘Freak of Nature’, clearly a “trick of nature”, survives, nobody knows how, with the photosynthesis reduced to the edges of the foliar laminae, and even succeeds in blooming, with red simple corollas, in incredible contrast with the spectral white of leaves and stems.

Last unusual bi-coloured, is the ‘Crocodile’, made precious by a thick yellowish network. Selected in 1964, in Australia, belongs to the group of the Ivy Geraniums, and is not affected by albinism, but by virosis. A non-infectious disease for the other plants, which it carries with itself since the birth, and shows, dramatically, the lymphatic vessels.

To the tricoloured, belongs, for instance, the famous ‘Mr. Henry Cox’, created in England in 1879, with roundish leaves, and pink-salmon simple flowers, and the ‘Mrs. Pollock’, born, always in England, in 1858, with red orange simple flowers, and leaves deeply lobed. Both present a great variability, but, in the whole, the second one is more robust.

All these geraniums, with a metabolism reduced by the lack of chlorophyll, have obviously a rather slow growth, and like a seriously ill patient which needs oxygen, they require a lot of light for completing their wonky photosynthesis.

On the other hand, the usual rules are in force, with the caution that, normally, they are more exposed to the diseases. In winter, they must be sheltered in luminous verandas, because the lack of light transforms the golden yellow of the leaves in a fatal greyness, and the same happens if we exceed with the fertilizers, which, in any case, must be scarce, proportioned to the growth, poor of nitrogen and with a rich contents of potassium.

He who does not feel like setting up a “hospital for geraniums”, and loves unusual leaves, has, anyway, many possibilities also with the normal plants, rich of chlorophyll. The ‘Chocolat Peppermint’, perfumed of mint and chocolate, displays, just to say, oak-shaped leaves with an elegant dark zone, and this tendency is even more evident in the ‘Royal Oak’.

The Pelargonium barklyi, a botanical geophyte, which in winter, disappears under the ground, shows roundish leaves more decorated than a lace; those of the Pelargonium myrrhifolium coriandrifolium, imitate the look of the Coriander; and he who loves the forms, super indented and slender, without reaching the exaggeration of the Pelargonium denticulatum, has available several hybrids such as the x asperum, with leafy branches which reach the refinement of the ferns.