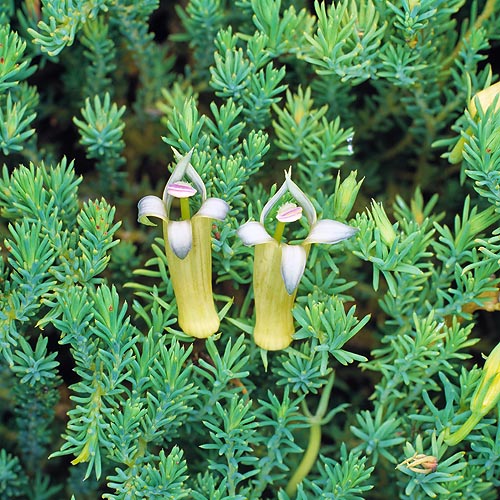 This plant is native to south-western Australia, where it grows close to the banks of rivers and swamps, on mainly sandy or stony soils.

The genus is honoured to the French botanist Jean Baptiste Leschenault de la Tour (1773-1826), the name is considered as valid without the “s” because it is so erroneously reported by Robert Brown in the publication in which he established the new genus (1810); the name of the species is the combination of the Latin words “acutus” = sharp and “lobus” = lobe, with reference to the sharp lobes of the calyx.

The Lechenaultia acutiloba Benth. (1860) is a small perennial, much ramified, shrub compact, 20 to 60 cm tall, with fleshy, linear, close, leaves, imbricate at times, with an usually rounded apex, 3-5 mm long, of a green-grey colour.

The flowers, hermaphrodite, solitary, terminal and erect, without petiole (sessile), about 1,3-2,5 cm long, are tubular with pointed lobes and usually curved, of greenish yellow colour, blue close to the apex. The fruits are about 1,5 cm long capsules. It reproduces by seed and easily by cutting on a substratum mainly formed by siliceous sand, kept humid, but without stagnations, at the temperature of 20-24 °C.

Rarely present plant in cultivation, it would deserve a greater attention, even if its flowers are not particularly attractive, due to its foliage, by sure ornamental, and its compact posture; it is particularly suitable for rocky gardens.

It may be cultivated in full sun or slight shade, on sandy and/or stony soils particularly draining, in the tropical, subtropical and warm temperate zones, especially in the Mediterranean type ones, with the climate characterized by a marked seasonality, with little rainy winters and warm and dry summers; it is also cultivable in pot respecting the aforementioned exigencies, in particular the watering in winter must be spaced, allowing the substratum to dry up before giving water again, and reduced in summer.