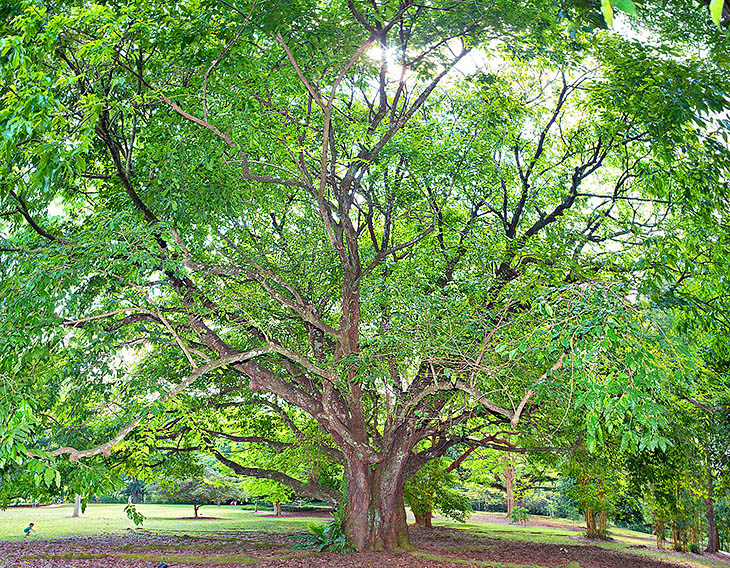 The species is native to Venezuela where it grows in the dry tropical forests as well as in the humid ones on soils particularly rich of selenium.

The Lecythis ollaria Loefl. (1758) is an up to 20-30 m tall deciduous tree with reddish yellow bark and simple, entire, alternate, sessile or sub-sessile, ovate to oblong leaves of 5-9 cm of length and 3-5 cm broad.

The inflorescences are terminal spikes carrying numerous flowers with 6 oblong, concave sepals and 6 spatulate, slightly unequal petals, concave with curved margin, of white colour. The fruit is a pyxidium (dried fruit where, when ripe, detaches from above a sort of top called operculum) dehiscent with 6 lobes, woody, of brown colour, roundish, 3,5-6 cm long and of 5-10 cm of diameter, containing oily brown seeds rich of selenium (up to 5-10 g/kg of dry weight in plants grown on seleniferous soils).

It easily propagates by seed, which has a short-lasting germinability, with germination time variable from one to four months and first blooming around the tenth year of age. Species little cultivated outside its origin zones, requires an exposition in full sun, but during the very first years of life, deep, well drained, soils and average temperatures of 25 °C or little more, suitable therefore to tropical or subtropical climate zones. 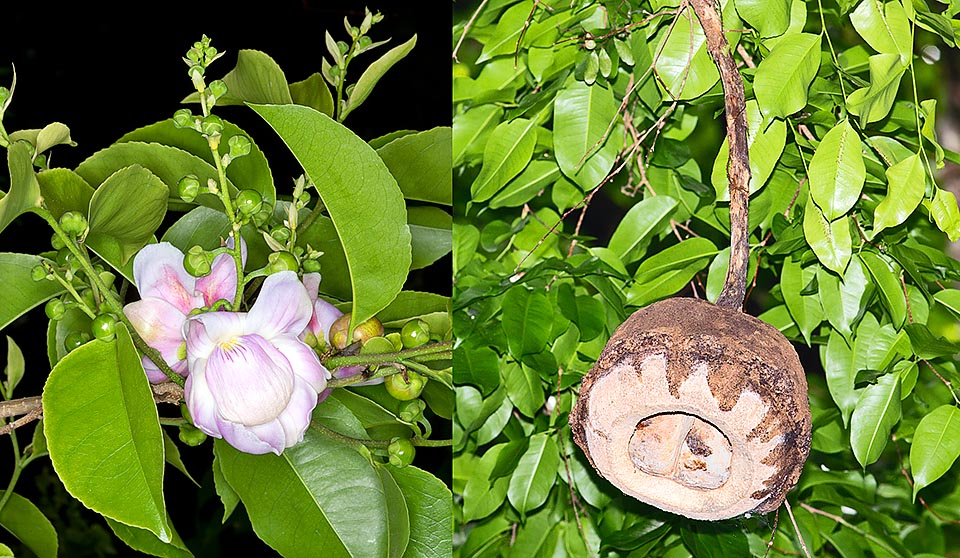 Close up of the flower and the large hanged fruit. The woody pyxidium is often used for realizing various handicrafts © Giuseppe Mazza

The seeds, of excellent taste, are collected and consumed locally or utilized for extracting the oil, of pale yellow colour, with taste and smell similar to those of the almond oil; used for the illumination and for the production of soaps. The selenium is a basic element of the human diet, but is toxic at high levels; the seeds of Lecythis ollaria contain by far the highest concentration of this element in a vegetal material, their excessive consumption can cause intoxication by accumulation, with nausea, vomit and diarrhoea followed by alopecia, depilation and loss or damage of the nails.

The reddish yellow to dark brown wood has excellent characteristics of hardness, duration and resistance to the insects and is used in the civil constructions, for pylons and submerged structures. The woody pyxidium is often used for realizing various handicrafts.