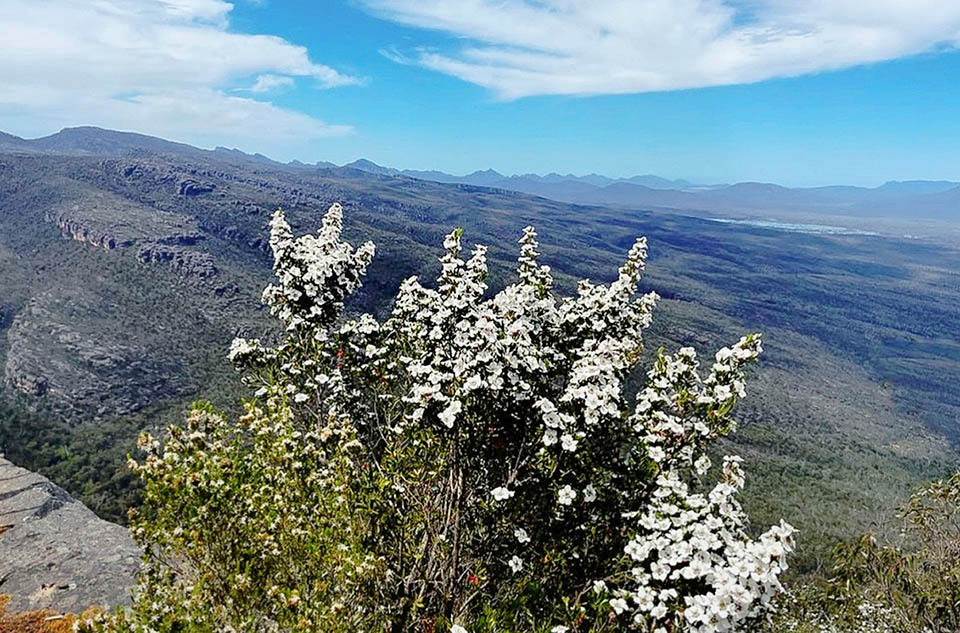 It is found from the plain up to the alpine zones, at times along the banks of the water streams and even in rocky sites. From an ecological point of view, it is a pioneer plant and plays a prevalent role in the sterile and poorly drained environments where it settles, favouring the subsequent growth of other plant species. Also, it is very useful for the control of the erosion, for the carbon sequestration, but is also a woody weed of the pastures. 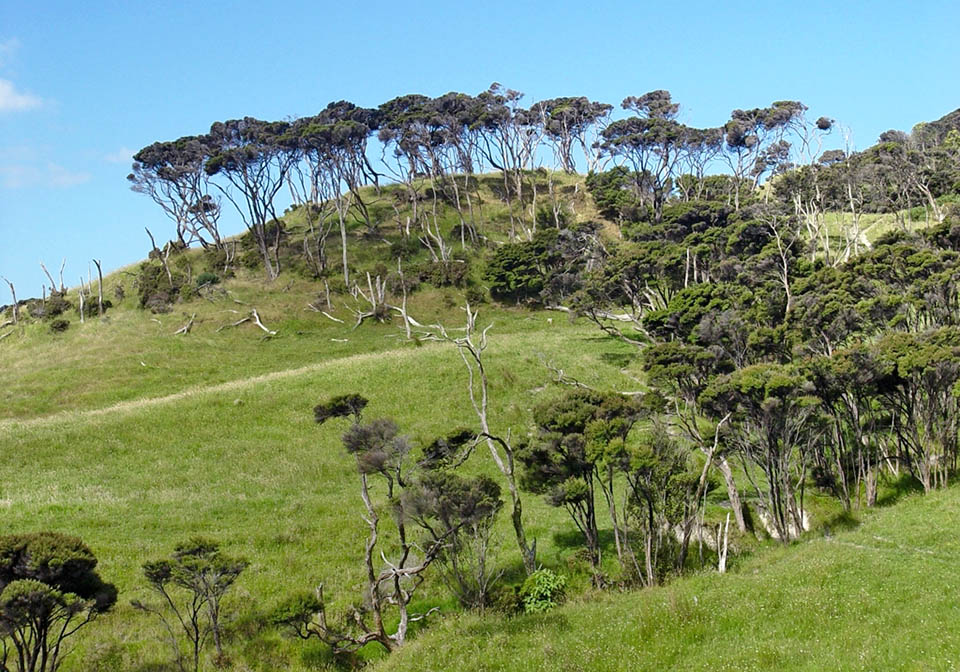 In bare zones, the seeds form up to 10 m tall plants, with fast growth, becoming dominant on the slow-growing vegetation © Svetlana Ilyukhina-Prorok

It is called Mānuka by the Māori people of New Zealand but is also known as Broom tea tree.

The generic term comes from the Greek “leptòs”, lean, thin and “spérma”, seed because of its very small seeds. The specific epithet scoparium refers to the foliage of the plant like brooms (besom). 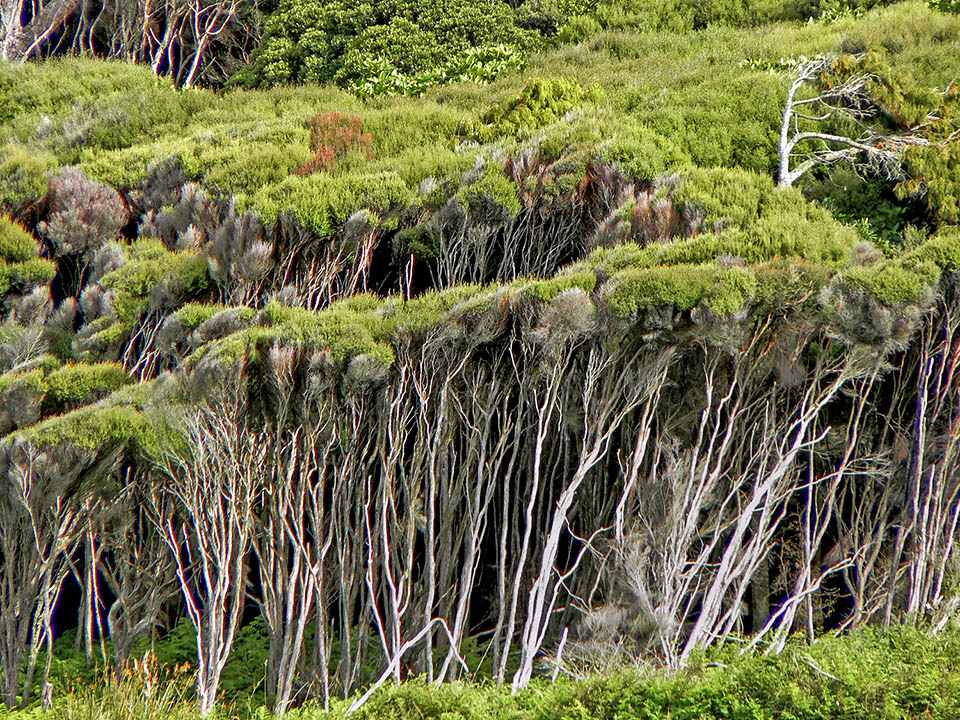 In the disturbed areas, impoverished or humid of New Zealand forests, it can become the dominant climax vegetation © Anton Wartmann

Leptospermum scoparium is a shrub or small tree up to 5 (10) m tall, with compact bark and with silky and glabrous young stems.

The leaves, alternately arranged, are 7-15 mm long and 2-6 mm broad and may vary from strictly elliptical to strictly oblanceolate. They have curved margins, pubescent when young, with often sharp apex, stinging and with the base usually thinned in a short petiole, at times almost absent.

The flowers are pentamerous, solitary, of 8-12 mm of diametre, white, rarely pink or red. The floral receptacle (hypanthium) is 2-3 mm long, usually glabrous. The sepals are glabrous, 2 mm long and the petals are 4 to 7 mm long. 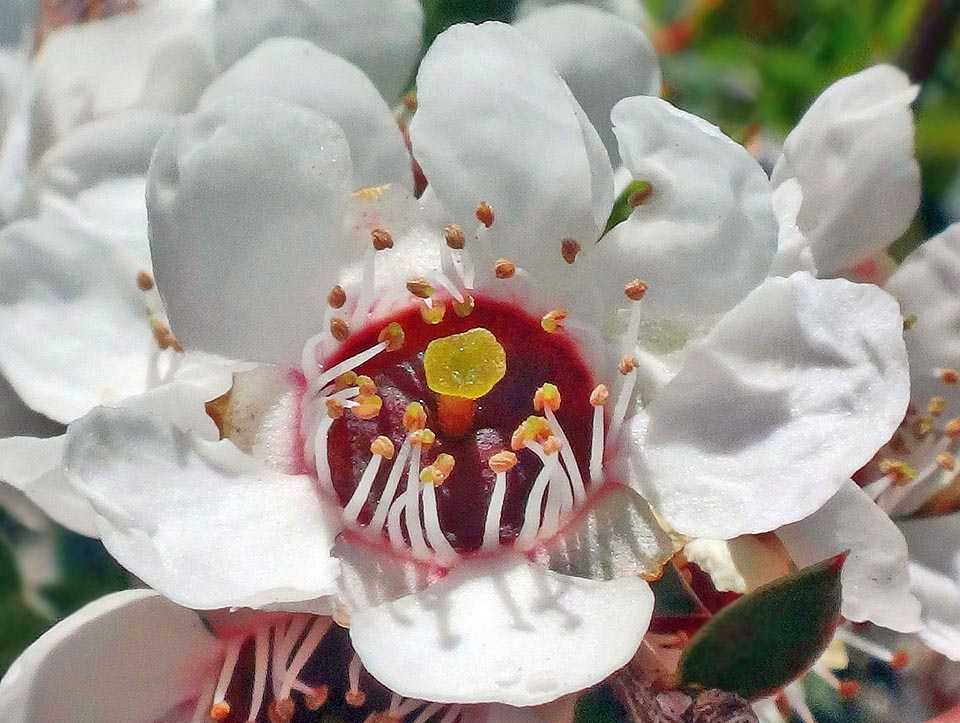 In nature flowers are mainly white, but also red and double. Thanks to bees introduced from Europe they produce a bitter honey rich in medicinal virtues © Arjo Vanderjagt

The stamens are numerous, free, shorter than the petals (2,5-3,5 mm long), attached to the edge of the hypanthium. The ovary is usually 5-locular with many ovules. 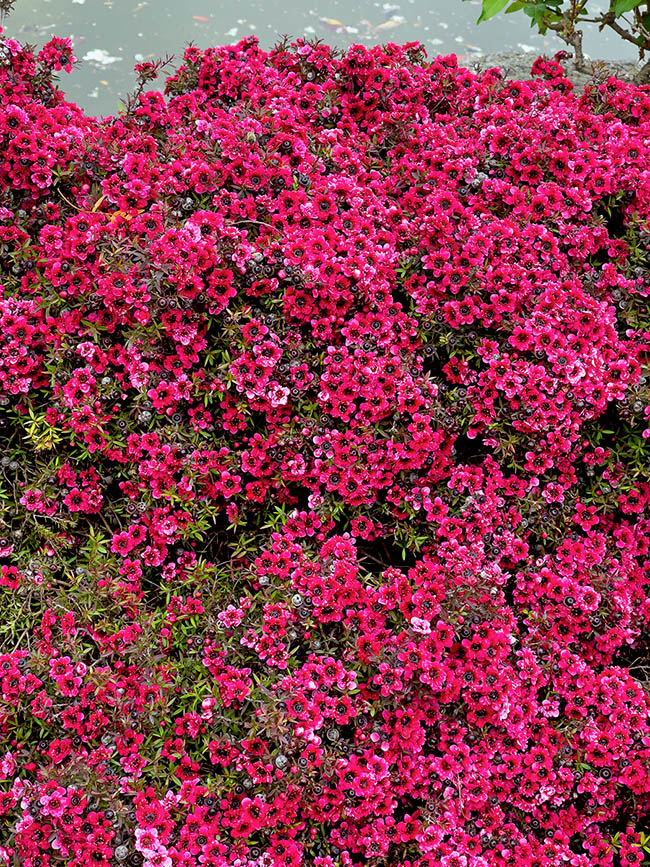 Leptospermum scoparium, pruned low, is also a garden plant due to its long and abundant blooming © G. Mazza

The fruit is a persistent usually woody capsule with 5 valves of 6-9 mm of diametre, dehiscent for the opening along the line of division of the apical valves. The seeds are numerous and very small. The diploid chromosome number is 2n=22. Some cultivars like “Helen”, “Strybing” and “Martini” are triploid (2n=33) whilst the cultivar “Keatleyi” is tetraploid (2n=44).

The parting of the supercontinent Gondwana, during the Cretaceous (145-66 million of years ago) has geographically isolated the taxa living in it allowing a rapid speciation. In particular, many genera of the family have kept isolated within Oceania. It is believed, therefore, that Leptospermum scoparium originated in Australia before the beginning of the dryness of the Miocene and, due to events of long-range dispersion, mainly caused by the strong winds, it has reached New Zealand during the last twenty million years.

It is said that the explorer James Cook was appreciating the tea the local populations prepared from the fresh leaves of this plant. In fact, during the taste tests, this tea has often received marks higher than the traditional Chinese tea obtained from the Camellia sinensis (L.) Kuntze. For an excellent aroma it is essential to leave the leaves in infusion for a remarkably longer time than the normal teas in order to give the aromas the possibility of passing in the water.

From the economic point of view this species gives ornamental shrubs, essential oils and honey. The essential oils have antimicrobial properties and studies are under way for the determination of the pharmacologically active elements. The nectar has antibacterial and bioactive properties and this has led to research investments to develop and make the New Zealand honey industries to grow.

The honey has a slightly bitter taste and is utilized by the Maori populations as energetic food as well as medicinal remedy. The part interested in the plant for medicinal purposes is the nectar of the flowers, that the introduced European bees (Apis mellifera) collect by means of their lambent-sucking mouthparts and transform into honey.

Modern studies have evidenced that the health properties of this honey come from an exclusive active principle, the methylglyoxal, responsible for the antibiotic and antibacterial properties that characterize it, compared to all other honeys. 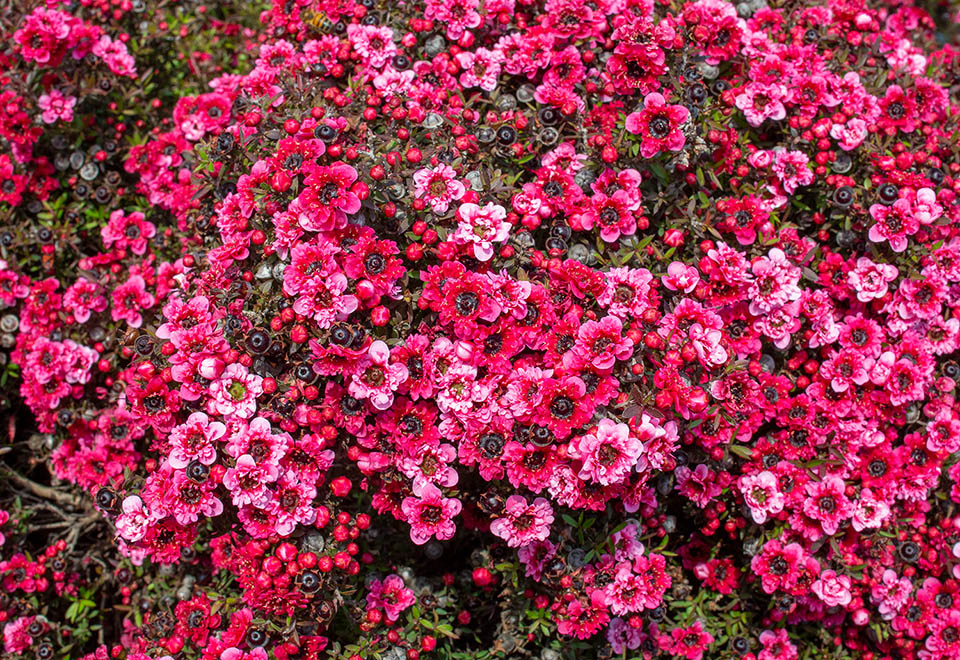 As a consequence, it is utilized in many therapeutic products. Although there are many types of honey with antibacterial properties, due to the presence of hydrogen peroxide, only the honey of mānuka has a high level of antibacterial activity without peroxide, for this reason it is internationally marketed with the quality mark UMF™ (Unique Manuka Factor).

The honey of mānuka supports the immune system and enhances the well-being of the organism thanks to its antioxidant action, has anti-infective capacity against bacteria and viruses, and also antimycotic, antiseptic, anti-inflammatory action.

From the leaves is obtained the precious essential oil with antibacterial properties. 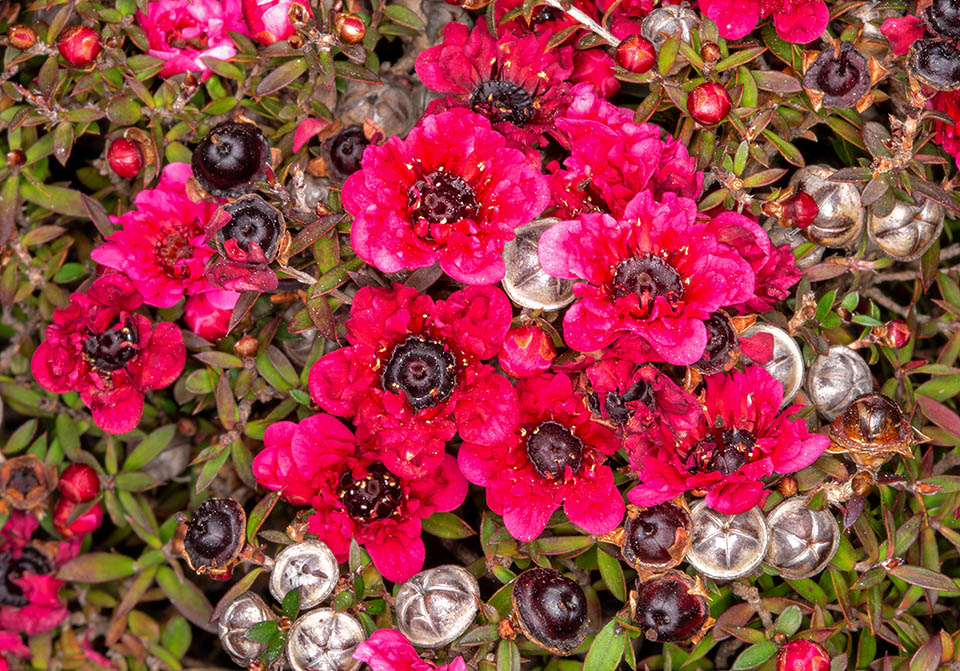 Near the flowers we note fruits at different ripeness stages. They are capsules rich in seeds remaining on the plant the whole year © Giuseppe Mazza

It has been ascertained that the presence of mycorrhizal arbuscular fungi helps to improve the production of this oil in the plantations for the commercial production. The essential oil, obtained from the leaves and from the branches, is utilized in the commercial cosmetics as tonic. It is also a component of cosmetic products such as skin balms.

Locally, the bark is utilized for covering the huts and the wood, of red colour, strong and elastic, is used for works of marquetry, cabinet making, fences, etc.

Recent studies have shown that Leptospermum scoparium is in a phase of evolutionary differentiation, with structural modifications, due to the isolation of its populations. 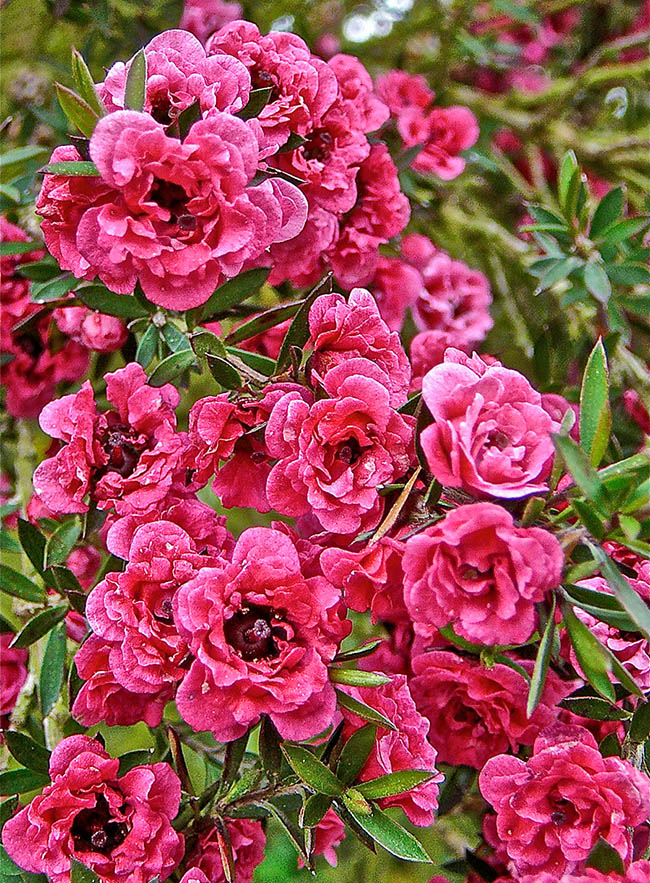 For instance, it has been noted that the loss of the woody lignotuber enlargement of the radical crown, placed at the base of the stem with buds from which get form several stems for the fire protection, is evident in the populations located in zones relatively free from the fire of the Southland of New Zealand, whilst the Australian populations and of Tasmania retain their lignotubers. Furthermore, biochemical studies have evidenced that the New Zealander populations are rich in serotonin whilst the Australian ones have higher levels of monoterpenes.

Leptospermum scoparium has been introduced in many Countries, in particular in the United Kingdom and in Hawaii, where it has escaped cultivation becoming a serious threat to native species of those islands.

It is a long-lasting blooming species and therefore very ornamental, particularly suitable for embellishing the gardens. The cultivation of its plants is easy and does not require particular care.

They are to be placed in sunny zones in the cold climate regions whilst they can be planted even in half shade in the warmer ones.

They are plants that tolerate the intense heat, winds and saltiness and resist temperatures up to -10 °C for a short time. They grow better in acidic or neutral, sandy and well drained lands.

Must be avoided the water stagnation as this may favour the growth of harmful fungi, especially in the plants grown on pots. During the vegetative period it is a good practice to manure utilizing a liquid fertilizer for flower plants or with a slow release fertilizer after blooming.

To contain the development and give an orderly shape, in the northern latitudes, a slight pruning can be done in the month of February or after blooming.

Leptospermum scoparium multiplies in spring by sowing or in summer by cutting.

For the latter, 5-8 cm young branches (semi-woody) are to be taken to get rooted in a mixture in equal parts of peat and sand.

Leptospermum scoparium is fairly resistant to pathogens. Some parasites are the cochineal, particularly the mealy scale insects, and the aphids. 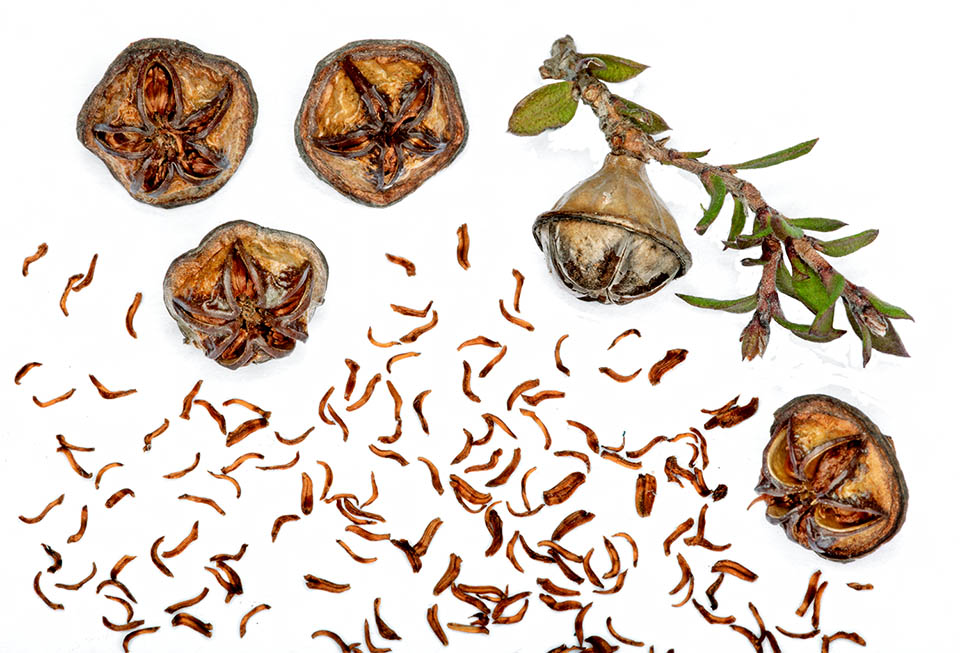 Close-up of the woody capsules full of tiny seeds that, dispersed by the wind, keep vital for many years © Giuseppe Mazza

To limit damage can be utilized biological or chemical antiparasitics.

In the wild, Leptospermum scoparium presents small white flowers but occasionally with red and double petals and it happens as well that some species of the genus hybridize each other giving the nursery men new opportunities for the selection of ornamental cultivars. Below, we list some cultivars standing among the most common in the market. 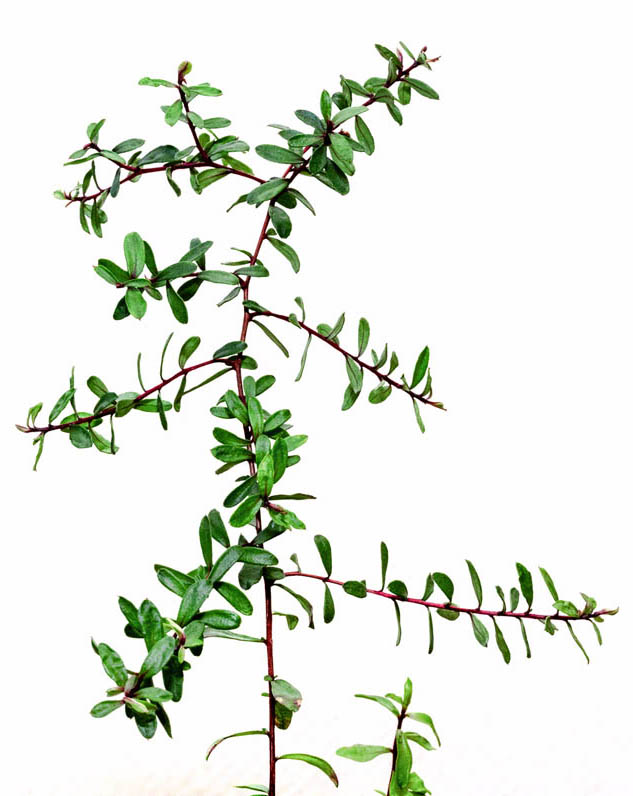 It is sown in spring, barely covering the seeds. At first, growth is slow. Here, at 8 months, it begins to branch © Giuseppe Mazza

Leptospermum scoparium ‘Ruby Glow’ is an erect shrub, densely ramified, with small needle-like leaves, of dark green colour at times fading into pink. Along the stems get form many double flowers, of ruby red colour. After blooming, on the plant do remain, for a long time, the small woody capsules containing the tiny seeds.

Leptospermum scoparium ‘Snow White’ is a compact shrub, roundish, with needle-like grey-green leaves at times fading into pink and double flowers of white colour and numerous greenish at the centre.

Leptospermum scoparium ‘Karekare’ is an evergreen shrub with splendid buds of white flowers.

Leptospermum scoparium ‘Princess Anne’ has white double flowers with dark brown centre rendering this plant very ornamental and suitable for any garden. It grows well in full sun or in half shade in a well drained soil. It is frost and saltiness resistant.

Leptospermum scoparium ‘Coral Candy’ has grey green leaves and in spring abundant double flowers of pale pink colour edged in bright pink with a very dark central part. After blooming a pruning is advisable to maintain a nice compact shape.