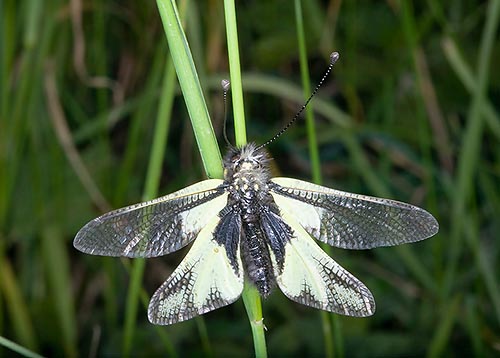 Practically, we do not have ecologic information about Libelloides coccajus Denis & Schiffermüller, 1775, as well as for all species belonging to the Ascalaphidae.

This is the fastest flying specimen in the genus Libelloides living in Italy.

It settles in most of the hilly areas, from the lower slopes up to the lee of the ridges of the mountain plains. Insect which can adapt to quite varied life conditions, typical of the meadows which are not utilized as pasture (it lays its eggs on the stem of the herbaceous plants); the larvae hunt in wait on the surface of the ground.

Usually, the flying time for the adults stands between May and July.

The adults of the Ascalaphidae are very skilful aerial predators (like the better known dragon-flies), with all relevant fittings.

Fast fliers, claws with powerful nails, wide eyes, robust masticatory buccal apparatus, strong feeling of the territoriality, preferred roosts during the hunting flight. The long club-shaped antennas distinguish them at sight from the dragon-flies, but render them similar, particularly in the genus Libelloides, to the Swallowtail butterflies. 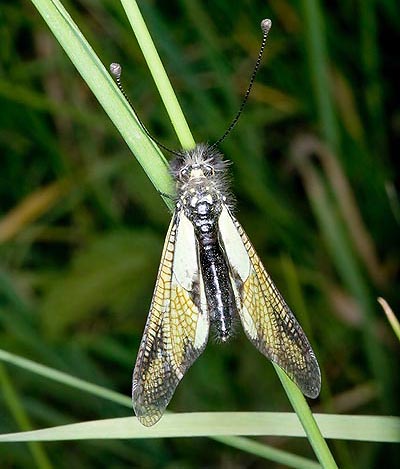 The Libelloides coccajus lays its eggs on the grass © Giuseppe Mazza

The eggs are laid down in groups on the herbaceous vegetation in meadows not much pressed by the herbivores.

The larvae hunt in wait in the litter of the ground, concealing in the habitat (some African species have larvae absolutely identical to lichens!).

The larvae are generic predators, which seize their preys with the buccal forceps, immobilize them with a salivary secretion, and finally suck them. The small new-born larvae are somewhat resistant to starvation, whilst the ripe ones are “practically” insatiable.

The ripe larvae spin a not very compact cocoon, with small particles of soil or other residues.

We know little about the length of the growth, also because it is very difficult to breed them in captivity.

The genus Libelloides has a W-Paleartic distribution, with its differentiation centre located in Europe. There are six species of this genus which can be found in Italy: one is confined to the Triestine Kras and the Gorizia one, another to the major islands (with two different sub-species for Sicily and Sardinia), other four well distributed all over the peninsula.