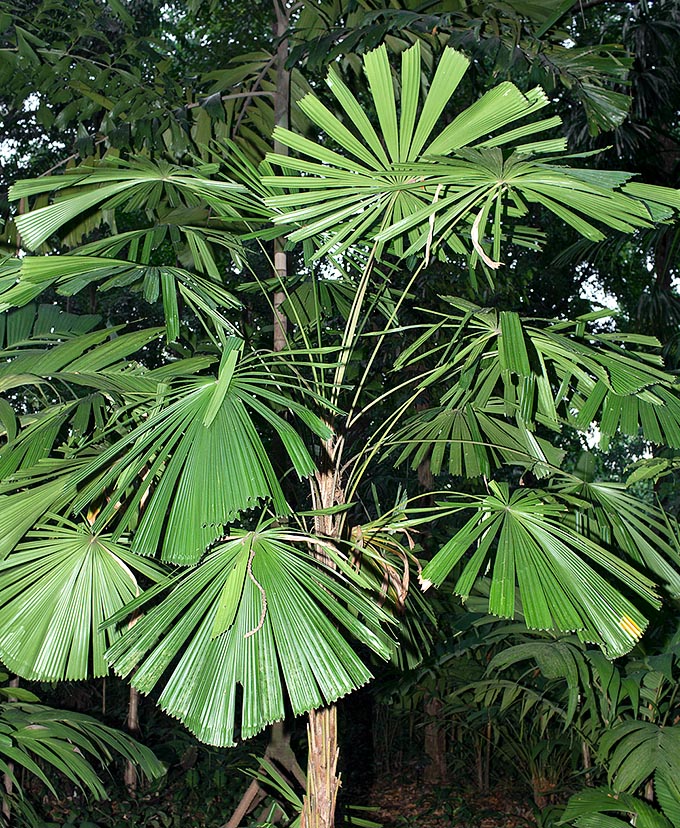 At home in Papua New Guinea and Solomon Islands, Licuala lauterbachii grows in the humid forests underwood. Quite rare in cultivation, can be 5 m tall with a 10 cm stem diameter. Up to 1,5 m long petiole and 1 m circular divided leaves © Giuseppe Mazza

The species is native to Papua New Guinea and the Solomon Islands where it grows in the underwood of the humid forests at low altitudes.

The generic term comes from the local name “leko wala” given to this genus of plants in the Molucca Islands; the species is honoured to the German botanist and explorer Carl Adolf Georg Lauterbach (1864-1937).

The Licuala lauterbachii Dam- mer & K.Schum. (1900) is a slow-growing monoecious species with single stem, up to about 5 m tall, but that in cultivation keeps lower, with diametre up to 10 cm, covered, but in the oldest part, by the remnants and by the fibres of pale brown colour of the bases of the petioles.

The leaves, on an up to 1,5 m long thin petiole provided in the lower part of short spines at the margins, are palmate, more or less circular, up to about 1 m broad, divided up to the base in several cuneiform segments of various breadth, plicate, truncate and toothed at the apex, of intense glossy green colour.

The inflorescences, ramified of the third order, form between the leaves (interfoliar), about 1 m long, initially erect, exceeding in height the plant, then arcuate in fruit, with yellowish hermaphroditic flowers. Initially green globose fruits, then red when ripe, of 1-2 cm of diametre, containing only one seed.

It reproduces by seed, previously cleaned from the pulp and kept in lukewarm water for two days, in organic aerated and draining organic loam maintained humid at the temperature of 26-28 °C, with times of germination of 3-4 months. In the Solomon Islands is present the Licuala lauterbachii var. bougainvillensis Becc. (1921) with leaves divided only in 6-8 segments of various breadth, where the central one is wider than all others. 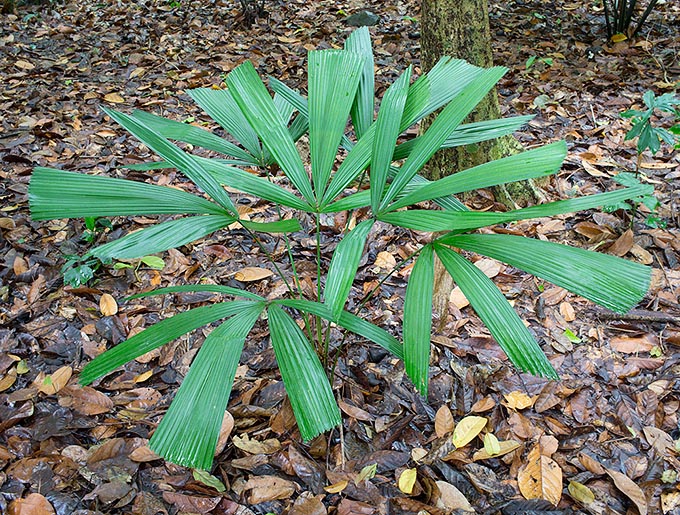 Licuala lauterbachii var. bougainvillensis, endemic to Solomon Islands, is very decorative due to the leaves parted in only 6-8 segments with the biggest at the centre. It well adapts in inner spaces to pot cultivation © Giuseppe Mazza

Species diffused in the origin places, but fairly rare in cultivation despite its remarkable ornamental characte- ristics, cultivable in open air exclusively in the tropical and subtropical climate zones with high atmospheric humidity and where temperatures of less than +10 °C are exceptional events and of very short duration. It requires a semi-shaded exposition sheltered from the winds and soils rich of organic substance, acidic to slightly alkaline, draining, maintained constantly humid. It well adapts to the cultivation in pot, in particular the variety bougainvillensis, for the decoration of open spaces or of winter gardens, verandahs, greenhouses, and spacious luminous interiors where the climate does not allow the continuous permanence in open air, utilizing a loam with the same characteristics before mentioned for the soils, with day temperatures over the 20 °C and lowest night values not under the 16 °C; the ambient humidity must be high, over the 60%.

Useful are the fertilizations, from spring to autumn, using preferably a balanced hydrosoluble product, with microelements, at half the dosage suggested by the producer.