The Licuala spinosa Wurmb (1780)
is native to a vast area of the Asiatic south-east, which includes India (Andaman and Nicobar Islands), Myanmar, Thailand, Vietnam, Indonesia (Java, Borneo and Sumatra), Malaysia and Philippines. It grows mainly along the coasts and the banks of the rivers.

The name of the genus comes from the native name “leko wala” given to this type of palms in the Moluccan Islands; the Latin name of the species “spinosa” = thorny, refers to the thorns present on the margins of the petiole.

Cespitose plant, shows trunks tall up to 3-4 metres, with a diameter of 5-7 cm, fibrous and covered by the remains of the foliar petioles in the younger part. 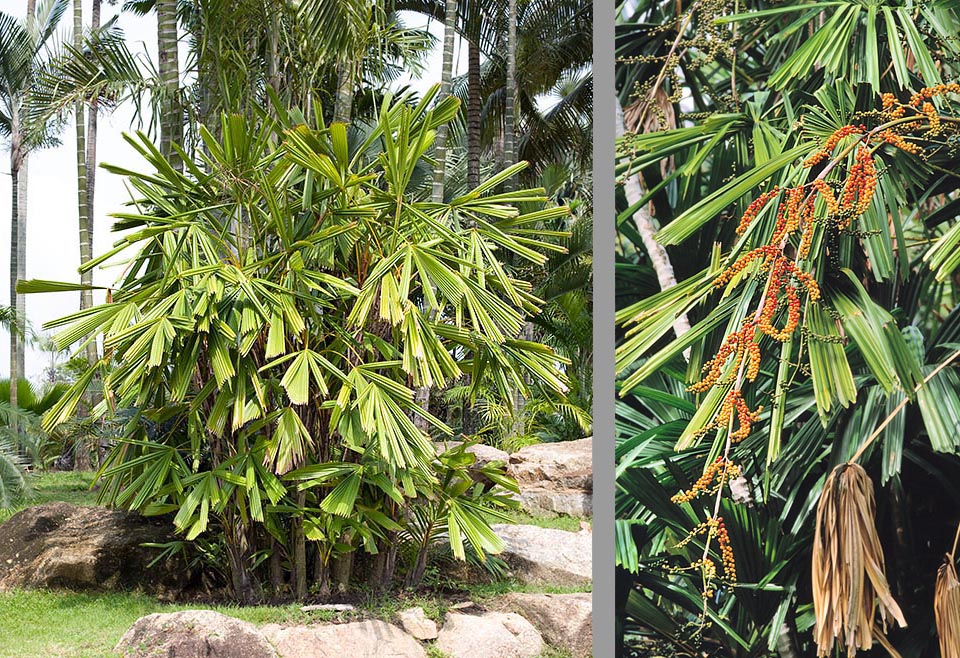 The leaves are palmate, almost round of about 1 metre of diameter, deeply divided in several truncate segments and indented at the apex, of a pale green colour, on a petiole long up to 1 metre equipped with robust thorns on the margins.

The inflorescences, which come out between the leaves and stretch beyond the top, are ramified and carry hermaphrodite cream coloured flowers, which are followed by globose fruits of red colour of about 12 mm of diameter. It reproduces by division or by seed which germinates at around two months.

It is considered the most resistant plant of the kind to the low temperatures (up to -3 °C) and in full sun, it can be utilized, therefore, for ornamental purposes, both in the tropical and subtropical areas and in the warm-temperate ones, in sheltered position. It requires a draining soil, sandy and constantly kept humid.