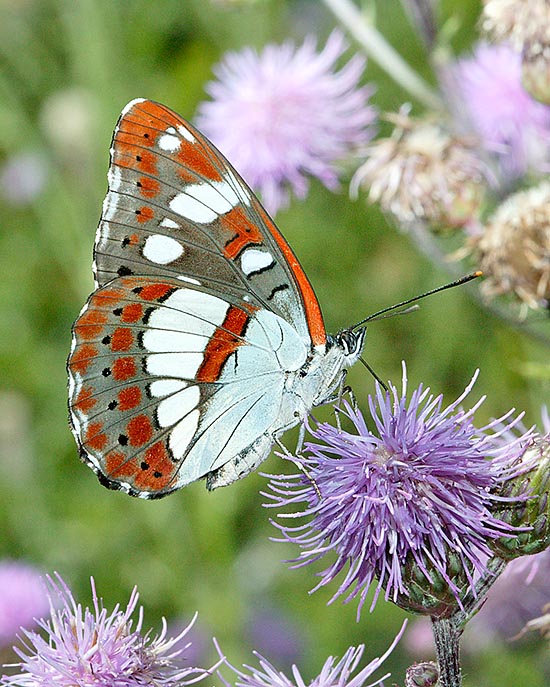 The Southern white admiral (Limenitis reducta Staudinger, 1901) is a pretty butterfly belonging to the order of the Lepidoptera and to the family of the Nymphalidae. This family is diffused in all continents and groups about 6.000 species; it is therefore classified as the largest of the families among the Rhopalocera.

The Limenitis reducta is the southern corre- spondent of the congener Limenitis camilla, an almost equal butterfly if not for some morphological particulars and that lives, though overlapping in vast regions, in further north areas. Also a subspecies has been classified, the Limenitis reducta herculeana Stichel, 1908.

The southern white admiral is not very common but is widely diffused in Europe, in the warmest and sunniest areas. It is a butterfly with a rather particular flight, typical for all the admirals of the genera Limenitis, Apatura, Ladoga and Neptis.

Wing beats deep and nervous, spaced by long and rapid straight glides and with sudden ascensions for intercepting whatever flying insect that may cross its area.

It is a very curious butterfly and often as soon as its area is crossed comes to browse rolling and gliding around the intruder, as if to sniff its presence. Soon after, it goes back to the starting position, on the leaf of a hanging branch on its flying way. It often perches keeping the wings completely open and then folds them immediately ready to go, as soon as it sights some intruder.

The scientific term Limenitis from the Greek “limenitis” means “protector of the port”, with reference to the protectors of these sites, but it does not appear to have a specific entomological meaning. Fabricius himself, in 1807, when did classify this order of lepidopterans, may have referred to the fact that the first specimen of these butterflies (seems to have been a Limenitis camilla) had been seized in the port of Leghorn and sent to the entomologist Petiver who scientifically called it Papilio livornicus. It is therefore presumed that the reference to the port may be linked to this last fact.

For what concerns the name of the species reducta, the meaning is quite clear: small, reduced or tiny. Always interesting and particular are the European common names: Southern white admiral, in English; Sylvain Azuré, in French; Etelanhaapaperhonen, in Finnish; Blauschwarzer Eisvogel or Zaunlilienfalter, in German; Ninfa de arroyos, in Spanish and Nimfa mediterrània, in Catalan. 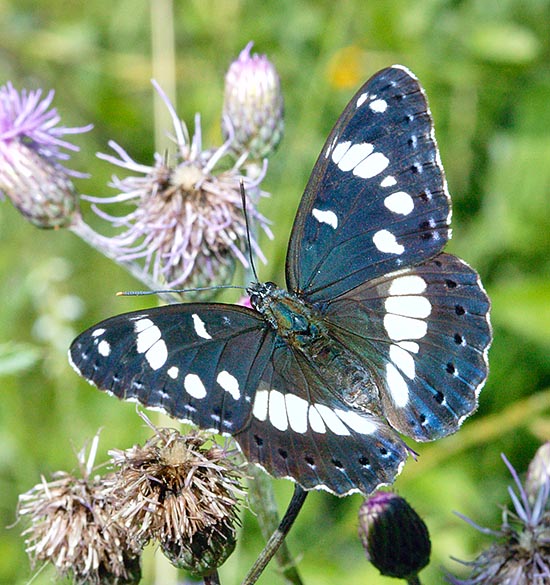 It is a palearctic butterfly fairly diffused in the Mediterranean Europe and northward up to cover a part of the Central one. It goes then eastward in a belt at the same latitudes reaching the beaches of the Caspian Sea and northern Iran. It is not present in Africa and in the extreme south of the Iberian Peninsula.

It flies from the sea level up to about 1300 metres preferring open areas close to lines of trees or edges of bush where it clings to the honeysuckle, its main host plant.

It is a thermophilic species and flies mainly when the sun is shining preferring to keep hidden in the vegetation during the cloudy days.

The southern white admiral has more than 50 mm of wingspan and is endowed of spectacular and powerful moving velocity.

The upper face of the wings is black with much visible bluish reflections creating sudden flashes during the flight. It is marked by several square white spots, lined in both wings in the post discal area, especially on the lower wing. The verso is instead of a very nice reddish brown colour, much evident, and rather contrasting with the upper face but creates that dissonance granting an extreme elegance and beauty to this butterfly.

We must keep in mind that in the Limenitis camilla this rust colour is much more tenuous and faded. On the verso of the fore wing are proposed again the same white spots of the upper face but they are totally immersed in the quite beautiful rust colour that covers the entire alar surface. The lower wing presents on the contrary an ample basal, white pearly, band, spaced by a narrow brown amber band almost reddish in the discal area, followed by a series of great lined whitish lunettes and finally by a reddish brown area totally covering the post-discal area as well as the sub-marginal one. In this last band is present only one of black small dots that distinguishes it from the conhgener camilla which has two of them. The antennae are long, clavate and very robust. The sexes are equal. 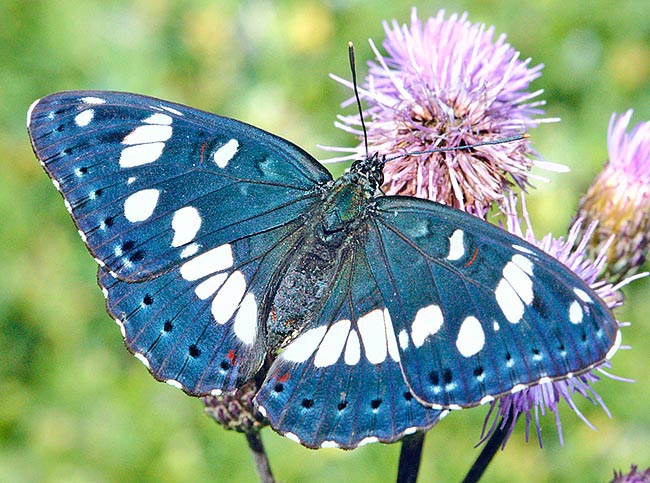 The metallic blue depends on the light inclinaton and disappears in a wing beat, like the butterfly © Giuseppe Mazza

The southern white admiral is normally a monovoltine species but in the warm areas it may originate one and at times two intermediate summer generations. It is not a precocious species as it is seen flying from May up to all September. Always in the warm areas a precocious flying away already since April and probably this is the triggering factor that then originates other generations.

It lays eggs singly on the lower face of the host plant that almost always belongs to the genus Lonicera. It has a short incubation in the summer generation and after a ten of days appears the caterpillar that results extremely particular in the shape. It is green with the lower part of ochre colour and with many wrinkling of the skin along the body. Moreover, it carries along the whole dorsal some long protuberances, coarsely sharp, of rust colour and equipped in their turn with small spines shaped like a rosette. Being small it is rather camouflaged among the thick foliage of the honeysuckle.
The chrysalis is brown, shaped very much like a withered leaflet of the host plant and is fixed with the cremaster directly on a small branch. The autumn generation spends the winter at the larval stage weaving and tying a small silky wad at the base of the twigs. It is a species often parasitized by the Cotesia sibyllarum.

Many are the names classified as synonyms for this species, even if often these have been later on renamed at level of subspecies. Here are some of them: Papilio lucilla Esper, 1778; Papilio drusilla Bergstrasser, 1779; Papilio pythonissa Miller 1859; Limenitis anonyma Lewis, 1872; Ladoga reducta Staudinger, 1901; Azuritis reducta Staudinger, 1901; Limenitis prodiga Fruhstorfer, 1909.