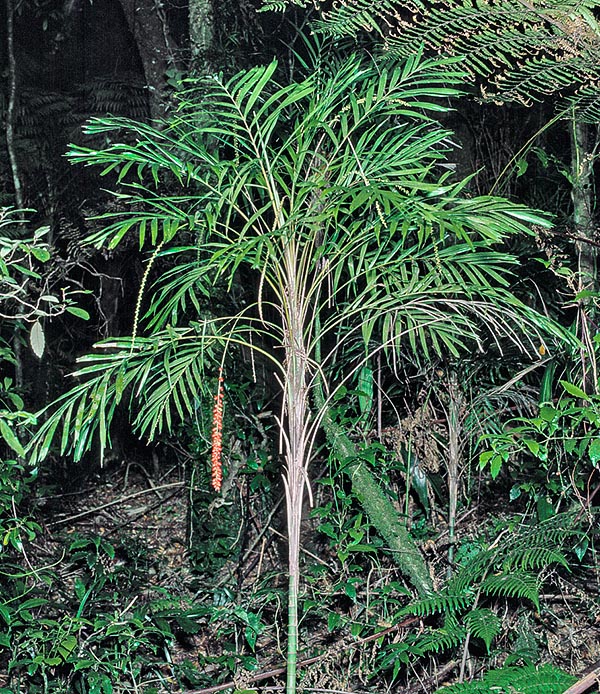 A Linospadix monostachyos photographed in Australia in its habitat © Giuseppe Mazza

The Linospadix monostachyos (Mart.) H. Wendl. (1875) is native to Australia, particularly Queensland and New South Wales, where it grows in the pluvial forests at medium and elevate altitudes, confined in the most humid and shady locations.

It is commonly known as: “walking-stick palm” (English); “Spazierstockpalme” (German).

Plant with solitary trunk, of green colour and marked by the rings left from the foliar bases, of 3-4 cm of diameter, can reach a height of 6 metres in the centenarian specimen in habitat (considerably less in cultivation), with at the base, under the level of the ground, an knob shaped swelling. The leaves are pinnate, of glossy green colour, long about 80 cm, with leaflets irregularly spaced on the rachis of variable width, cut obliquely and indented at the apex.

The inflorescence is simple, hanging, of yellow colour, carrying unisexual flowers disposed in the typical triad (a female one between to male). The fruits are globose, of red colour when ripe, of about 1 cm of diameter. It reproduces by seed which germinates in about one month.

Plant of great ornamental value, also for the long hanging infruitescences, but not much cultivated, is suitable for tropical, and subtropical climates, particularly humid in shady position; it prefers acid soils and constant temperatures, even if it can resist, for a short period, to temperatures around the -2 °C. For its stoutness and the natural “knob” at the base, the stem has been used in the past as walking stick, from which comes the common name under which this plant is universally known.