The plant is native to Australia (Queensland), where is present along the north-eastern coasts at the margins of the pluvial forests and in the open eucalypti forests, often by the margins of the rivers, on chiefly sandy soils, up to about 500 m of altitude.

The genus was dedicated to Patrick Murray, baron of Livingston, who destined, in 1670, his collection and his garden to botanical garden, later become the present ‘Royal Botanic Garden Edinburgh’; the name of the species is the Latin word “decora” = beautiful, elegant, with obvious reference.

The Livistona decora (W.Bull) Dowe (2004) is a monoecious plant with single stem, tall up to 20 m with a diameter of 25-30 cm widened at the base, of brown colour, tending to the grey in the oldest parts, on which are visible the close marks of the foliar scars and slight vertical cracks. 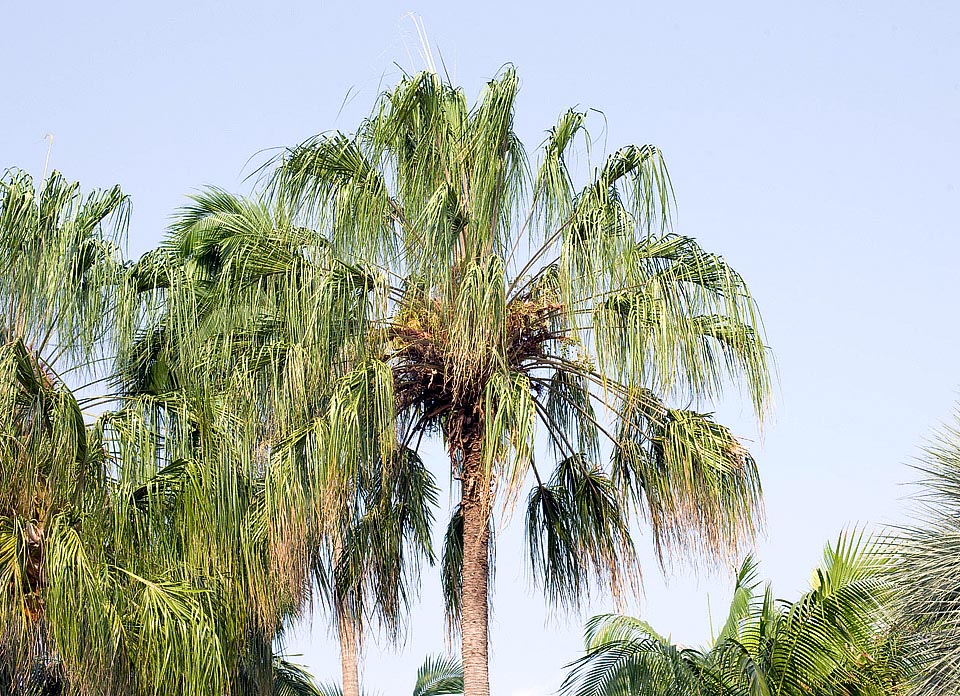 In Queensland the Livistona decora can be 20 m tall, with a 25-30 cm stem, characterized by the close horizontal traces of the foliar scares © Giuseppe Mazza

The leaves are of a glossy intense green colour on the upper page, pale green below, are costapalmate, orbicular, about 2,5 m broad, deeply indented in 70-80 thin segments, united at the base for not more than 5-10 cm, at their time divided at the apex, for about half of their length, in two sharp and pendulous segments.

The petioles are thin, green, 1,5-2,5 m long, armed at the margins, for the first two thirds of the length, of close thorns, curved and blackish, 0,5 cm long; the base decays for a good part in a fibrous mass which surrounds the stem.

The inflorescences bear between the leaves, they are little longer than the petioles, arcuate and much ramified, carrying tiny hermaphrodite yellow flowers; usually, there are more inflorescences present at the same time.

The fruits are globular, with a diameter of even 1,8 cm, glossy black when ripe, containing one seed only of about 1 cm of diameter. It reproduces by seed, which germinates in 1-3 months, utilizing a substratum formed by normal mould for sowing and coarse sand in equal parts; the growth is fairly fast. 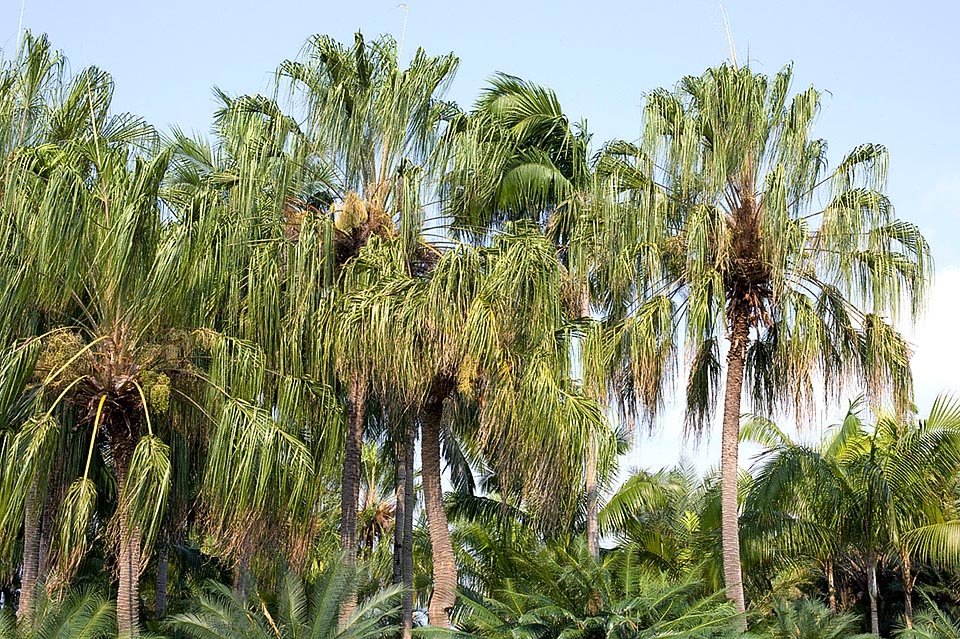 Isolated or in groups and rows, is one of the most ornamental Livistonadue to the typical crown with finely subdivided and drooping leaves © Giuseppe Mazza

Plant with great landscape effect, isolated as well as in groups of various heights or in lines; it is one of the most ornamental Livistona due to the typical crown with the leaves finely subdivided and hanging. It is cultivable in full sun since its youth in the tropical, subtropical and warm temperate climate zones, as it may resist to temperatures as low as -5 °C for a short time; it adapts to various types of soil, provided perfectly draining, with preference for the sandy ones, and bears, when adult, dry periods even if it advantages from regular and abundant watering during the warmest months.

It has a fairly good resistance to the saltiness, and therefore may be employed also close to the sea. The utilization as pot plant for the decoration of indoor locations is very limited, as it needs vast spaces and, primarily, a vey high luminosity.