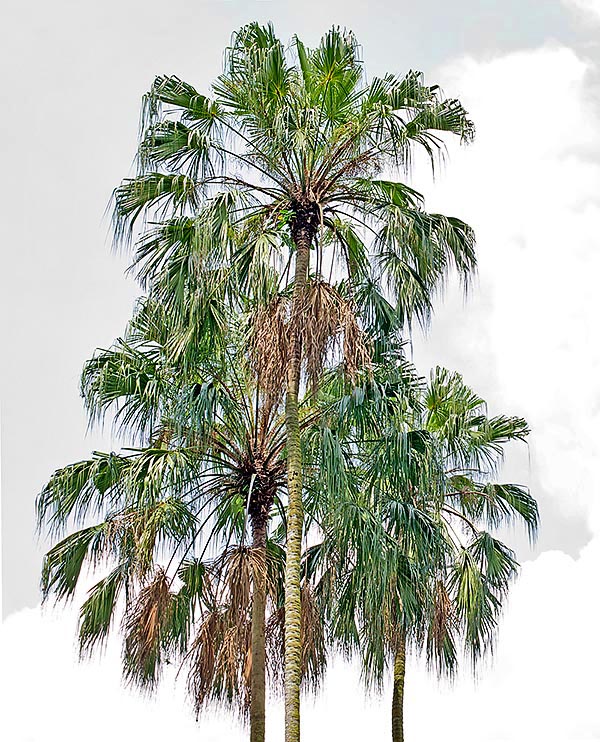 The species is native to Borneo, Cambodia, Java, Laos, Peninsular Malaysia, Philippines, Singapore, Thailand and Vietnam, where it grows in the pluvial forests from the sea level up to about 600 m of altitude.

The genus was honoured to Patrick Murray, baron of Livingston, who in 1670 devoted his collection and his garden to botanical garden, which, later on, became the present the ‘Royal Botanic Garden of Edinburgh’; the name of the species comes from the local name used by the Macassans of the Indonesian island of Sulawesi (Celebes), used by Rumphius (ca. 1627-1702) in his opus ‘Hebarium Amboinense’ published in 1741.

The Livistona saribus (Lour.) Merr. ex A.Chev. (1919) is a rather variable solitary species with 15-30 m tall stem and of 0,3-0,5 m of diameter, usually erect, enlarged at the base, of greyish colour with the remnants of the foliar bases permanent for long time.

The leaves, of bright green colour, are numerous, costapalmate, induplicate, almost circular, up to about 1,6 m of diameter, irregularly subdivided for about half length in 80-90 segments united in groups of 2-12 more deeply divided among them, with bifid and pendulous apex. The 1-2 m long petioles, of green colour or from dark orange to brown red glossy below, are provided at the margins of robust thorns curved and bulbous at the base, from green to brown colour, 1-4 cm long.

It reproduces by seed, previously kept in water for two days, in sandy loam rich of organic substance maintained humid at the temperature of 24-26 °C, which usually germinates in 2-4 months.

Species diffuse in a vast area of south-eastern Asia, but little cultivated elsewhere, particularly ornamental in the juvenile stage due to the deeply incised leaves and the particularly decorative thorns, even if aggressive. Of fast growth in the optimal conditions of cultivation, is utilizable in parks and gardens of great extension, as isolated specimen as well as in group or in rows, in the tropical, subtropical climate zones and also marginally in warm temperate ones, where, when adult, it can bear drops of temperature up to about -5 °C if exceptional and extremely short lasting; it has been observed that the form with reddish brown petioles is less resistant to the low temperatures (up to about -2 °C) than that with wholly green petioles. It requires full sun, but in the juvenile phase, and soils rich of organic substance, draining, maintained humid.

The leaves are utilized by the local populations as covering of the rural dwellings and makeshift shelters.