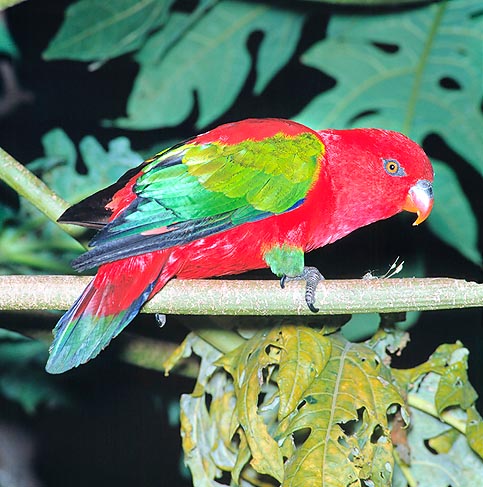 There is no sexual dimorphism and at times the couples have the same sex © G. Mazza

There are several genera of Lories, in all, seven (Chalcopsitta, Eos, Lorius, Neopsittacus, Phigys, Pseudeos, Vini), to which we have to add the various genera of lorikeets always belonging to the subfamily of the Loriinae (Charmosyna, Glossopsitta, Trichoglossus, Oreopsittacus). Specifically, the Lories of the genus Lorius are those of major size among all genera.

The species of the genus Lorius are two: the Chattering lory, in French called also Lori noira (Lorius garrulus Linnaeus, 1758), and the Lory lory or Black-capped lory (Lorius lory).

They are endemic to Indonesia and the Pacific Ocean Islands.

They live inside the pluvial tropical forests, where they utilise as roost the branches of high trees, with thick foliage and, as centre of construction of the nests, the junction points of two or more branches.

The Lorius garrulus is a massive parrot; the male as well the female may reach lengths of 28-31 cm. There may be length variations in these intervals, from individual to individual; it is, therefore, a polymorphic species. They have a livery mainly formed by two basic colours, green and bright red. The liveries are equivalent for both sexes. 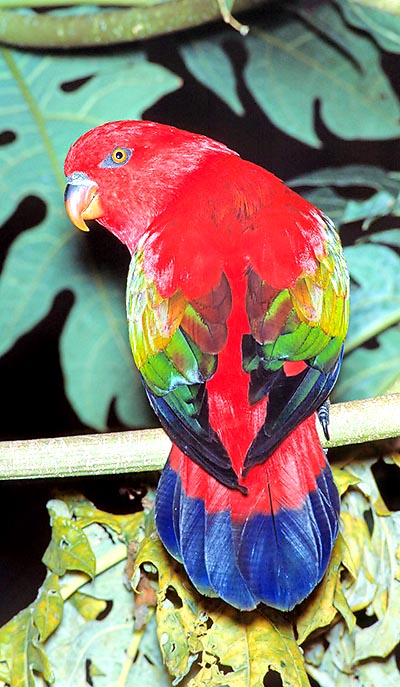 In the wild, they eat nectar, pollen and fruits © Giuseppe Mazza

In the specific: the red prevails on the head, the face, the back, the belly whilst the remiges of the wings, as well as the primary and secondary coverts are dark green. The tail, long and fringed, has the rectrices red for the 2/3; whilst at the extremity (tips), they are green. In both sexes the eye has a black or burnt brown, iris and is surrounded by a dark orange ring. The beak is robust, but smaller than that characterizing the cockatoos, the macaws and the amazons, of dark orange colour, with a grey stripe of skin covering the nares, at the base of connection to the muzzle.

The foot is zygodactylous, index of arboreal life; furthermore male and female do not have characters of somatic sexual dimorphism, neither seasonal, nor permanent. The subspecies Lorius garrulus flavopallidus has also a yellow colouration on the back, whilst the rarer Lorius lory differs from the chattering more conspicuously due to the front and the top of the head, which are black, and due a vast blue band on the mantle, with the thighs and the abdomen blue too.

They are much active animals; in nutritional terms, they have an alimentary ecology very similar to the Lories of the genus Chalcopsitta, also if, vis-à-vis this last genus, with which it coexists quite well, they eat more types of vegetables, when in artificial habitat. Usually, in the wild, they nourish of nectar, pollen and fruits, they are therefore nectarivorous and frugivorous, but they do not disdain even the sweet maize in corncob and the larvae of various species of coleopterans. When in captivity, they eat also bread soaked in milk and flour worms, such as the larvae of the coleopteran Tribolium.

They are quite sociable animals; it is not rare, for instance, to see communities of Lorius garrulus accepting members of the two sexes of the genus Chalcopsitta.

They may have, being very intelligent, phenomena of vocal imitative nature, in any case their cry is not completely pleasant. The absence of somatic sexual dimorphism might lead to think that a possible ethologic dimorphism may make easy to recognize the two sexes, but this is not the case.

In general in the Lories and, in the specific, in the Lorius garrulus, the behaviour both in the wild and in captivity is not a reliable indication of the sex. Two males and two females may quite well live together and behave like a true pair.

At times, two females lay the eggs at the same time, only the presence of four eggs may indicate that the pair is formed by two females. Often, we have to determine the sex by the chromosomal way, because in captivity these animals tend to gain weight becoming obese and therefore it is difficult to know their sex surgically (with laparoscopy). 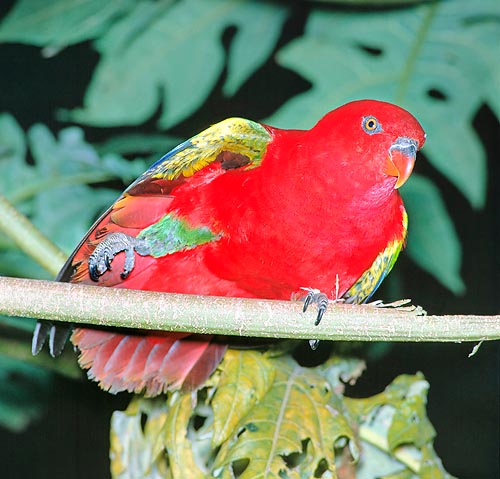 The males, during the mating time, both in the wild and in captivity, become very dangerous and aggressive, so much to kill any bird getting too close to the nest.

Like for all Lories, also in the Lorius garrulus, the brood is formed by two eggs, incubated by the female; the most sensitive moment is when the pullets start getting the plumage.

The pullets, before flying away, remain in the nest for 10-11 weeks, while the father nourishes them, caring also the partner, but this time of staying varies in relation to the complete formation of the plumage, which, in its turn, varies depending on the subjects.

When in captivity, it is a good thing to utilize cages raised off the ground, in order to avoid bacterial infections and infestations of parasites.

Furthermore, as they suffer much from the cold, in regions of the temperate belt, both in Boreal and Austral hemispheres, where the winters are rigid and long, it is a good practice to get cages with internal chambers, with a clean cement base, where they may shelter, whilst the pullets born in artificial habitat, when close to the winter, are to be moved, a few hours after the birth, to insulated incubators in order to avoid their demise, as they have the tendency to fall down, as they move quite a lot, from the nest, and they would not survive to the night alive.

The IUCN has established that the Lorius garrulus stands in a vulnerable phase of its existence, in terms of density of population.