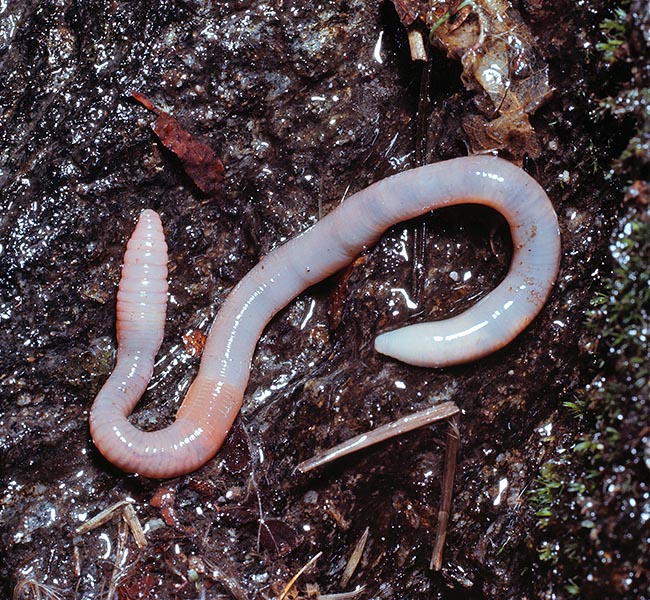 These worms with circular section (whence the name of the type – annelids), are cosmopolitan, therefore distributed all over the Planet Earth; besides the species Lumbricus terrestris there is also the Lumbricus rubellus and the well known Giant lumbric (Lumbricus herculeus).

Enormous is the importance of the ecological role this terricolous limivorous annelid has in nature and also in agriculture (limivorous means that it nourishes of earth by filtering the same), as it has a primary role in the formation of the vegetal ground (assimilation of the soil). By digging channels and galleries, it carries there big quantities of vegetables and by swallowing small portions placed in depth, it mixes the various layers of the soil. All this encourages a better ventilation and oxygenation of the areas where they are present as well as the formation of the humus.

The members of the annelids are endowed of a well developed and efficient nervous system and show evident morphological differentiations; in the lob worm, or earthworm, the complexity of inner organs is not accompanied by a similarly complex and differentiated outer structure; the body is subdivided into equal rings, typical of homonomous metamery.

Lumbricus terrestris section seen under microscope. From periphery, we see the skin, followed by a layer of circular muscles (turquoise line),then one of longitudinal muscles (purple red bands). At the section centre, we see a complex round structure: a lobe attached to a turquoise peduncle. The pink longitudinal, folded, central line is the Typholosolis, a loop of the belly which greatly increases its absorption. At the loop beginning in the back part of the round structure, we see a dorsal blood vessel. The grey ventral structure is the nervous chain © Giuseppe Mazza

In fact, this worm when adapting to the well known conditions of the underground life, has sacrificed a big part of the sensorial organs (gills, bristles, parapodia) of which are equipped almost all the other annelids; it does not even have a “trocophore” larva as the other annelids do have, as the newborns of the earthworm are, apart their size, absolutely equal to the parent, a sort of a nymph as is the case of the insects with hemimetabolic develop- ment.

The earthworm, basically, is an annelid that, while abandoning the aquatic life for the land, has deeply modified its morphology.

On the body, placed in a pair of lines, are only few bristles (whence the term of the order, oligochaetes); the rings in which the body is subdivided are interrupted by a glandular belt called “clitellum” of a more or less pale colour, which usually stands between the 31st and the 37th segment, extending therefore for six rings.

At one apex of the body, stands the “peristome”, that is, the mouth, on the opposite one the anus, that is, the “pygidium”. The breathing takes place in a cutaneous way. The biggest dimensions do not exceed the 30 cm of length, per 1 cm of diameter and about 100-180 homonomous (that is, equal), metameres, well distinguishable to the naked eye, which subdivide the cylindrical tapered body.

The locomotion of the earthworm is not undulatory as in other annelids, but it happens through extension and contraction processes of the body and therefore it requires the existence of structures suitable for anchoring at the right moment. The actual sequence of the events, taken by the biologists by filming, is as follows. 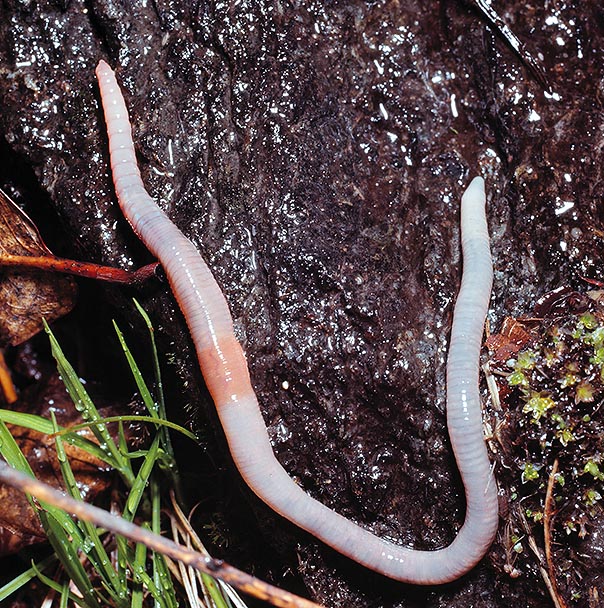 From the fore extremity of the body a contraction wave of the circular muscles starts, compressing the fluid contained into the coelomic hollows, extending the metameres.

As the bristles of the metameres located behind the contracted ones are bent outwards and inclined in the direction of the tail, the body of the earthworm remains anchored to the substratum.

The lengthening of the metameres ensures that the fore extremity is pushed ahead.

As soon as the contraction wave of the circular muscles has extended to all the fore half of the earthworm, in this half begins a wave of contraction of the longitudinal muscles, which pulls forward the following metameres.

At this time, the bristles of the metameres of the rear part of the body are bent inwards, whilst those of the fore part are bent outwards, anchoring the animal.

Repeated contraction waves move each single metamere of 2-3 mm, at each “step”, with a rhythm of seven-eight “steps” per minute.

The earthworms get out from their shelters during the night, looking for food and nourish, as “necrophagous” of the dead material found at the surface of the soil. And this is why that, especially after the rain, in the morning, we find on the meadows small mud sculptures, in relief, born from the dejections. Further organic material is also introduced with the earth ingested (limivorous species), during the sinking into the ground.

The earthworm is an insufficient hermaphrodite, which means that in each member are present, at the same time and on different segments, the reproductive organs, masculine as well as feminine; but each individual cannot self-reproduce sexually, and so it needs to copulate with another member and, depending on the cases, it will act as male or female, by utilizing one or the other reproductive organ.

They can also reproduce asexually, within certain limits, by regenerating the parts which, for instance, due to a mechanical traumatism, have been destroyed; all this can happen provided that the destroyed fragment is not too big. The mucus secreted by the glands of the clitellum, is used for wrapping the eggs that, in number of 1.600 to 2.000 are released in the soil every about five months, as well as for adhere the bodies of the two members during the copulation. Obviously, they are organisms which do not risk at all the extinction.