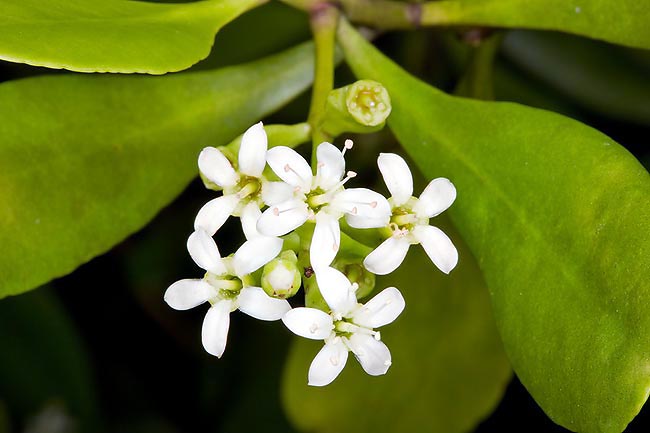 The genus is honoured to the Hungarian botanist István Lumnitzer (1750-1806); the name of the species is the Latin word “racemosa” = arranged in clusters, with reference to the shape of the inflorescence.

Common names: “black mangrove” (English); seen the ample range of the plant, there is a huge quantity of common names in the various languages and local dialects.

The Lumnitzera racemosa Willd. (1803) is a much ramified shrub or evergreen tree, up to 8 m tall, even if, usually, it keeps lower, around the 2-4 m, with grey or reddish brown bark in the young branches, tending to blacken and to fissure with the age. It has simple, pale green, alternate and succulent leaves, grouped at the extremities of the branches, 4-7 cm long and 1-3 cm broad, obovate, oblanceolate or spatulate, with corrugated edges and rounded extremity with a small notch at the apex (“emarginated” leaf).

It does not have pneumatophore roots (roots emerging from the water or the mud, which allow the flux of oxygen to the submerged organs), as is the case of other plants of mangroves, but, at times, in the most humid areas, in the lowest part of the stem develop aerial roots which penetrate the soil and form true and proper counterforts contributing to the support of the plant.

The inflorescences are axillar, long up to about 6 cm, usually carrying few hermaphrodite, perfumed flowers, with an about 1 cm long coralline tube, corolla with 5 petals each 5 mm long and of white colour and 5-10 stamina as long as the petals or little more.

The fruits are ovoid drupes slightly flattened laterally, fibrous, of blackish brown colour when ripe, 1-2 cm long and 6-8 mm broad, containing only one ovoid seed; the fruits can float and this facilitates their dispersion by means of the water.

Among the mangroves, it is one of the plants which better tolerate the highest rate of salinity in the soil, up to the 90 per mill after some researchers, but it stands also among the few bearing conditions of dry soil and therefore is capable to diffuse in environments differing from the typical ones of the mangroves; this versatility makes it a potential infester in the tropical and subtropical areas. As a matter of fact, introduced in 1960 in a botanical garden of southern Florida for ornamental purposes, has escaped from the cultivation and is quickly spreading and naturalizing among the local mangroves.

In its original locations, the wood, due to its resistance and duration, is utilized as structural material in constructions, as sleepers, fences, boats, etc.; moreover, it is excellent firewood. It has also some utilization in the traditional medicine, thanks also to its high contents of tannins (about the 19%) of its bark.