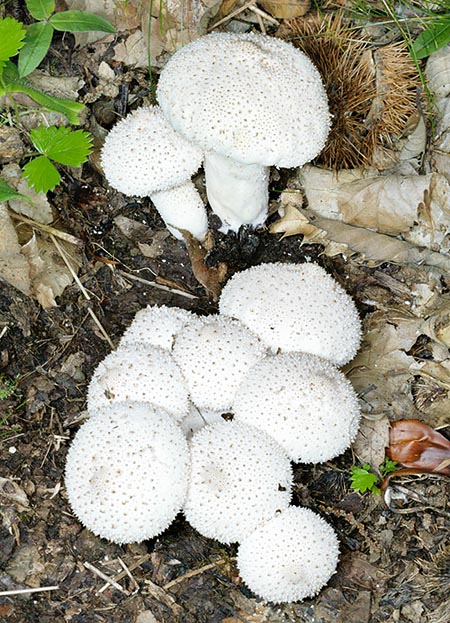 Terricolous, ubiquitary Lycoperdon perlatum is common in the woods © Mazza

The etymology of the genus Lycoperdon comes from the Greek “lúkos” = wolf, and “pérdomai” = I emit air from the bowels. Wolf fart.

The name of the species comes from the Latin “perlate”, which means very ample, much enlarged, referred to the warts covering a space which is, rightly, much wide, much ample.

To the genus Lycoperdon are ascribed carpophores typically pyriform, or subglobose, pseudo-stipitate or turbinate. The carpophores fit into the substrate with the fascicular mycelial hyphae or with cords of rhizomes.

The carpophores of this genus have the exoperidium initially united, then dissociated in granules, pearls, warts or spines, which, initially thick, transform then due to the growth; once their protecting function is ended, they dry up and dissolve, and also the exoperidium dissolves partially or totally.

The endoperidium is thin, membranous, with filamentous hyphae, smooth, opaque, elastic, of soft consistency; it is physically tied to the fascicle of the mycelial hyphae of the base. The release of the spores takes place through the opening of the orifice in the endoperidium at the apex. The gleba, initially white and firm, while ripening becomes dry and dusty and includes the spores and the capillitium; the subgleba is well developed, with small cells structure visible to the naked eye, the diaphragm is either present or absent. 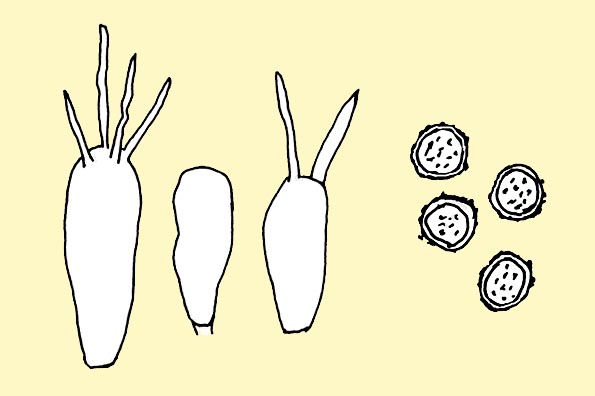 Basidiocarp: in shape of overturned pear, subglobose, resembling to a pestle, with whitish colours, then cream and finally with brown shades. The outer part, the exoperidium, is formed by cone-shaped and truncated spines easily rubbed off, surrounded by small warts. When the spines, with the ripening or with the time, fall down, the exoperidium remains decorated by a typical reticulated pattern. The endoperidium is smooth, membranous, thin, opaque, elastic and soft with the humidity, from cream to ochre-grey colour.

Gleba: (the fleshy inner part): initially white and firm, then becoming, when ripe, olive-yellowish, brown and converting to dust formed by spores and capillitium. The dispersal of the spores happens though the opening of a small hole at the apex of the carpophore (apical dehiscence). The well-developed subgleba forms the whole pseudo-stem and is formed by well visible small cells.

Habitat: mainly terricolous, ubiquitous in conifer forests as well as in broadleaf ones.

Edibility: It may be eaten, provided the gleba is candid white.

Microscopy: 3,5-4,5 µm, globose and warty spores, some with the sterigma still attached. Exoperidium of pseudo-parenchymatic structure with rounded or strongly ellipsoidal spherocysts and with thin wall.

Edible when young, is covered by spines which later fall replaced by a reticulum. The cream white colour darkens with age © Giuseppe Mazza

Remarks: It’s by sure the most diffused puffball (common name), its sporophores are recognizable due to the pear-like shape and the particular structure of the exoperidium formed by conical spines easily detachable and surrounded by a line of small warts. It may be mistaken only with Lycoperdon pyryforme Schaeffer : Persoon, but this grows on decaying wood which, when the spines fall, does not show the reticulum.