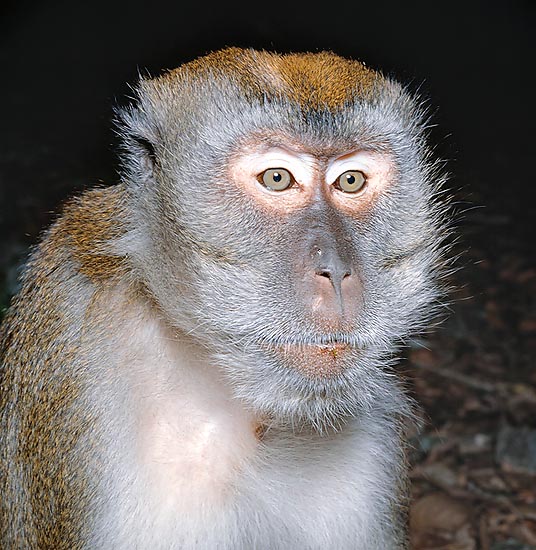 Usually, they are robust animals and have powerful limbs. The colouration of the hair is often yellowish-brown, with a pale zone on the ventral face.

Some species have ischiatic callosities, which become red when adult with the arrival of the sexual maturity.

All these animals are diurnal and well adapted to the arboreal life. However, some of them, when obliged to long displacements looking for food, often descend to the ground.

The long-tailed macaque is endemic to Burma, Indochina, Malaysia, Indonesia (but Celebes Island) and the Nicobar Islands. 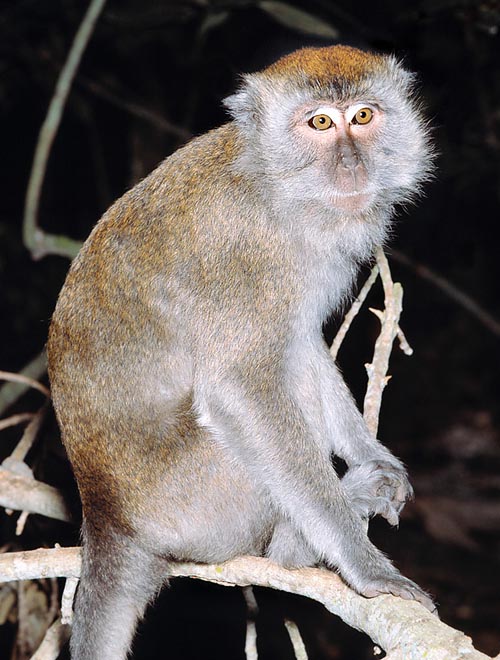 Along mangroves, in ebb tide, it also eats crustaceans and bivalves © Giuseppe Mazza

In these regions, it lives by the sea and on the banks of the rivers, or in the Mangroves in Burma, Indochina, Malaysia, Indonesia and the Nicobar.

These monkeys have a frugivorous and omnivorous diet, as they nourish also of crustaceans, from which they take the name of crab-eating, and of insects.

It is one of the few mammals populating the associations to Mangroves, mostly inhabited by arthropods, such as crustaceans, insects, arachnids, by water and land molluscs, by fishes and birds.
They are much intelligent monkeys, as, for instance, for nourishing of bivalve molluscs, being unable to break the valve with the mouth, they utilize the hands with which they rub the invertebrate on a trunk till when the retractor muscle of the valves gets tired and opens them.

On the contrary, the populations living along the sea side are able to read, taking advantage from them, the various phases of high and low syzygy tides (for syzygy tide it is meant when the excursion between low and high tide is at the maximum, this happens, for instance, during the night of full or new moon, that is when the Moon, Sun and Earth are aligned, whereby the gravitational effects of the Moon add to those of the Sun, on the Earth, in the specific on the seas).

On this occasion, they go, in fact, along the infralittoral or subtidal zone, exposed to the phase of low tide, for getting crabs, molluscs as well as shark eggs, anchored with their cirri to the water plants. For them, they are a real deli, being rich in yolk.

In addition to the name of Long-tailed macaque, the Macaca fascicularis is also called crab-eating macaque or Buffon macaque. It is the smalles species of macaque and replaces the Rhesus macaque (Macaca mulatta) in southern India. 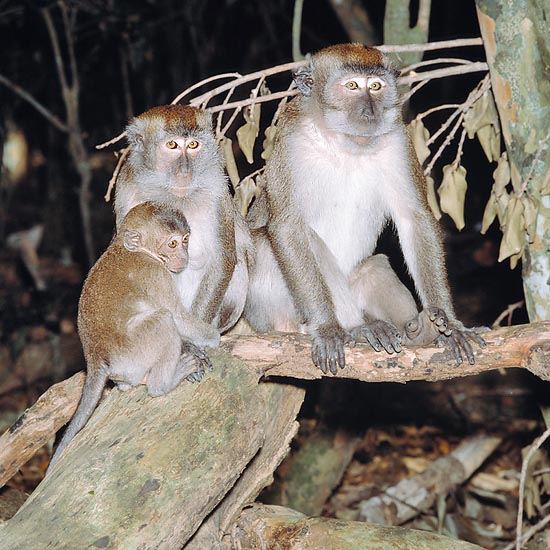 Family group. There's no too dimorphism but the male size © Giuseppe Mazza

The colour of the hair, thicker on the back than on the belly, tends to the grey. The female has a pair of pectoral breasts.

This monkey is a rather terrestrial and much opportunist macaque. It lives in huge multiple-masculine groups, composed by some forty, as an average (from 6 to 100) specimens, with an average population density of 39-90 animals per square kilometre.

If it is the case, it may prove an excellent swimmer. When captive, an about 40 year’s longevity has been observed.

The female generates one infant only, after a gestation of about six months; the males mature sexually by around the 6th-7th year of life, the females around the 3rd-4th.

The Macaca fascicularis populations are declining in some regions, after the estimations done by the IUCN and the WWF; at times, in some geographic areas, it enjoys the protection of governments, as is the case close to Bali’s temples.

Unfortunately, even today, it is commercialized for the medical research; for this purpose, in 1992, up to 70.000 individuals were seized.

In spite of this, luckily, the IUCN estimates that this species is at very low risk and the CITES monitors its trade.