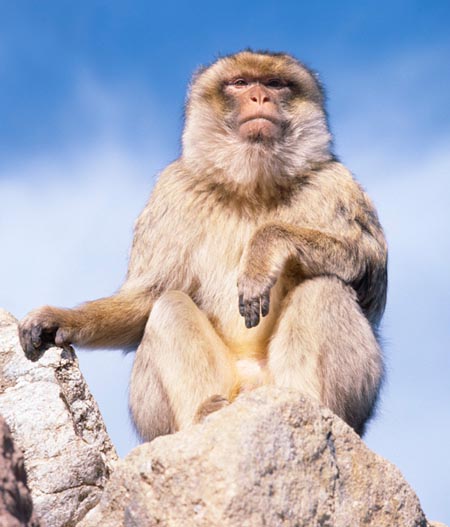 It is diffused in some zones of Morocco (in the Atlas and the Moroccan Anti-Atlas) and of northern Algeria, but is also present in Europe, with a population which has nowadays become autochthonous, on the Rock of Gibraltar (please see text of the Primates).

An ancient Arabic legend tells that these apes have reached Europe by passing through an underground tunnel unknown to humans.

Actually, the first individuals have reached Gibraltar with the first commercial boats.

In fact, as we can see in several movies, this was a typical animal, along with the parrot and the rat, always present on board the navy, commercial and pirates’ vessels.

The Barbary macaques, even if absolutely capable of easily and comfotably climbing the trees, display a clear preference for the open, barren spaces and also the stony areas. Often, behaving as rupicolous species, they in fact frequent the rocky zones almost devoid of vegetation. They are practically omnivorous, nourishing of roots, plants, seeds, rhizomes, fruits (especially wild pears and grapes), not to forget insects, arthropods, and even of small vertebrates. For this reason, they can be very well raised in captivity. 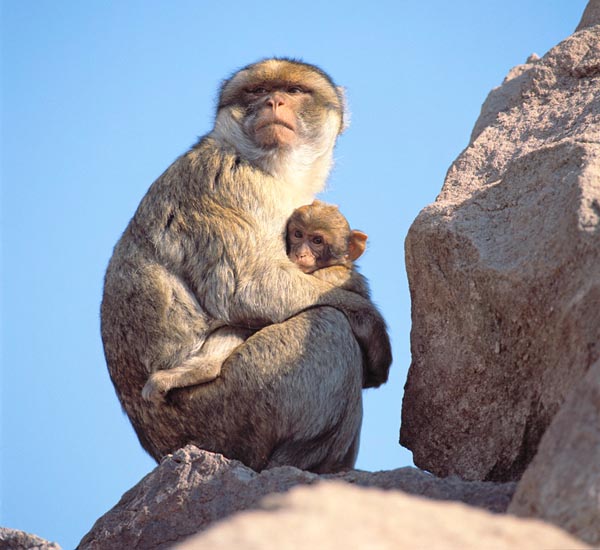 A mother. Only one baby comes to life after a 165 days gestation © Giuseppe Mazza

Unluckily, being very intelligent apes and therefore tameable, they are often present also in the private houses, utilized, thoughtlessly, as companion animals.

Like all apes of the genus Macaca, also the Barbary macaques have, in fact, a difficult character, choleric, characterized by sudden and unexpected anger bursts.

For nothing, they may start running wildly right and left, sweeping away all what they meet, biting with their dangerous canines and injuring anyone passing within range.

The Barbary macaque (Macaca sylvana), only non-Asian species of the genus Macaca, is very well separated from all the other groups of macaques.

For this reason, it is ascribed, as only species, to the subgenus Simia. Taxonomically and morphologically, this sub-genus differs from all others, but one, due to the absence of tail.

The other tailless subgenus, the Magus, has one only species, the Moor macaque (Macaca maura), endemic to Celebes Island.

It cannot and must not be absolutely mistaken with the Barbary macaque, due to its raven fur. The Barbary macaques are, on the contrary, covered by a nice, fairly thick, fur and rather wavy, of a brownish or olive colour. 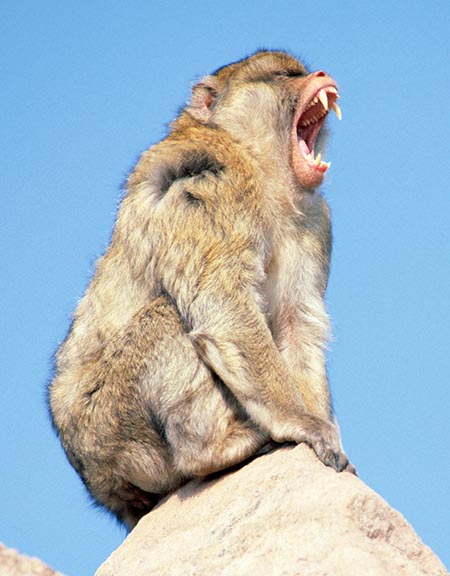 Showing the long canines is a persuasive threat © Giuseppe Mazza

Finally, the dimensions are greater. They may reach almost the 80 cm of length, with a height of about 50 cm. The males show a certain sexual dimorphism. They are fairly bigger than the females, and their canines are longer.

Among the other macaques, only the Southern pig-tailed macaque (Macaca nemestrina) may reach a bigger size.

The Barbary macaques live in troops headed by an adult male, but it seems that they have a social organization less developed than that of other species of macaques.

The Barbary macaque has polygamous sexual habits. The dominant male behaves, towards the other members of the family, like a real and genuine tyrant. In fact, when it’s the moment to share the food, he grabs the best part, and if the female or the young dare to rebel, he will hit them cruelly!

In these instances, it assumes well defined attitudes, classified by the ethological biologists: it gets an expression of fury, grinds the teeth and cackles like crazy.

The female has an about 165 day’s gestation and one baby only comes to life at each delivery. The IUCN classifies them as species at high danger of extinction.