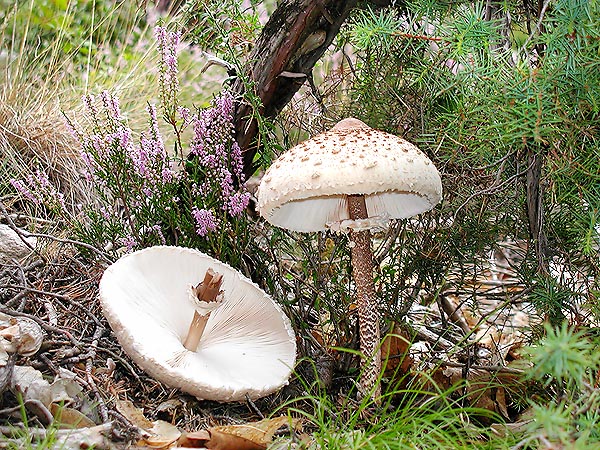 Called “Drumstick” for the look of the closed fungus, choice edible © Giuseppe Mazza

The name comes from the Latin word “procerus”, which means tall, grown taller, slender; currently known in Italy as “Mazza da tamburo” = drumstick, due to its shape when the cap is still closed, similar to the sticks used for beating the drums.

The genus Macrolepiota is characterized by tricholomoid, collibioid, carpophores, with central stem, long, bulbous at the base; the insertion of the gills, free at the stem, often with a collarium. The carpophores are rather robust, even if variable in their dimensions, but the ratio diameter of cap / height is always more or less constant. The cap has a scaly, flaky, floccose surface, with smooth disk zone and never striate margin.

The stem and cap are not viscous, but always dry; the stem can be decorated or not, and has movable double or simple ring. The spore-print is white or pale pink.

Cap: diameter from 10 to 30 (40) cm, very fleshy, initially egg-shaped, later campanulate and finally, umbrella-shaped, with a wide blunt, whitish, beige umbo, with darker centre, fibrous-downy margin and cuticle which breaks up in large brown-chestnut scales which easily fall and give a glimpse of the underlying white.

Gills: free on the stem, with collarium, thick, wide, easily detachable from the flesh of the cap, intercalated with lamellulae, regular entire edge, white, cream-white.

Stem: 10-40 x 1,5-4 cm, slender, cylindrical, attenuated on top, with bulbous base, fistulous, pale-brownish, covered by fibrillose, deep brown, scales placed in a concentric way. High ring, wide, double, freely movable on the stem, white on the upper side, brown, on the lower one, split margin.

Habitat: ubiquitous species; it grows in the meadows, in woods, both of broad leaved trees and of coniferous ones, and in the clearings, from the lowlands to the mountain, in summer and autumn. Rather common species.

Edibility: excellent edible, usually, the cap is utilized, but also the ring is very good, raw, in salad. The powder obtained from the desiccated stem is much utilized too.

Cheilocystidia: irregularly clavate, at times ventricose, some of them septate.

Remarks: unmistakable species due to its appearance, it is, by sure, the most known Macrolepiota. It is easily identified thanks to its remarkable size; the cap can have a diameter of even 40 cm and the stem is very slender, well longer than the diameter of the cap itself, and decorated by a typical snakeskin pattern.

It may be mistaken with Macrolepiota olivascens which, anyway, has a pale-pink spore-print and gills which stain of greenish when ripe or when touched, as well as with Macrolepiota fuliginosa which, on the contrary, has rather frail scales on the sooty brown cap and almost blackish decorations on the stem towards the base. Even if belonging to another Section, the Macrolepiota rachodes might mislead, but it is smaller, has a smooth stem, without decorations, and, when ripe or touched, it becomes reddish brown, like its white flesh turns to bright carrot-red, especially on the stem, when bruised.