The gritty and unmistakable Trumpet fish (Macroramphosus scolopax Linnaeus, 1758), belongs to the class of Actinopterygii, the ray-finned fishes, to the order of the Syngnathiformes, which include also pipefishes and sea horses, to the family of Centriscidae, and to the small sub-family of the Macroramphosinae.

The name of the genus comes from the Greek “makrós” = big and “rhamphos” = beak.

The name of the species “scolopax”, reiterates the concept, taking up the genus of a known long-beaked bird, the European woodcock (Scolopax rusticola – Linnaeus, 1758).

In spite of the frail and defenceless look, it is, without any doubt, a winning species, with a very ample distribution, practically all over the world, especially in the temperate waters.

The trumpet fish does not get far away from the coasts, but lives in depth, usually on the muddy seabeds. It has been found at 25-600 m, but it is most commonly at home between the 100 and the 250 m. 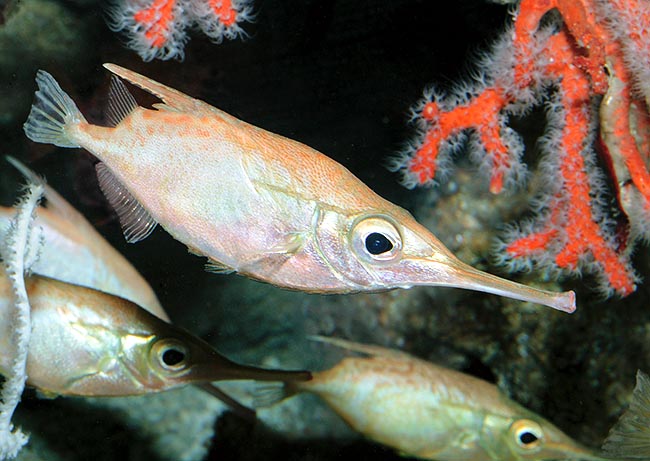 It can reach the length of 20 cm, even if it rarely exceeds the 12 cm, snout included. The body is elongated and compressed. The tubular snout, about 6 cm long, is protected by small but robust scales, rough to the touch, due to the presence of keels and spinosities. The mouth, placed at the extremity, has no teeth, as it is done for sucking up the plankton. The eye is proportionally much big, for a good vision in the darkness.

The overall colour is yellowish pink, darker on the snout and on the upper part, is more silvery on the sides.

It lives in schools, which move, more or less synchronized, looking for food. The juveniles nourish almost exclusively of pelagic copepods, the adults complete this diet with small bottom invertebrates.

The reproduction takes place in January-February. The young, up to 3,5 cm, are pelagic, with mimetic light blue back and silvery belly. Then, the progressively colour and migrate towards the seabed once they have reached the 7,5 cm of length.

The vulnerability index of this species is of 27 over 100.