Mammillaria: cacti with “round dance” flowers and fruits

A round-dance of flowers. The point on these flower crowned cactus. How they are cultivated in the Exotic Garden of the Principality of Monaco. Spectacular photos of flowers and seeds. 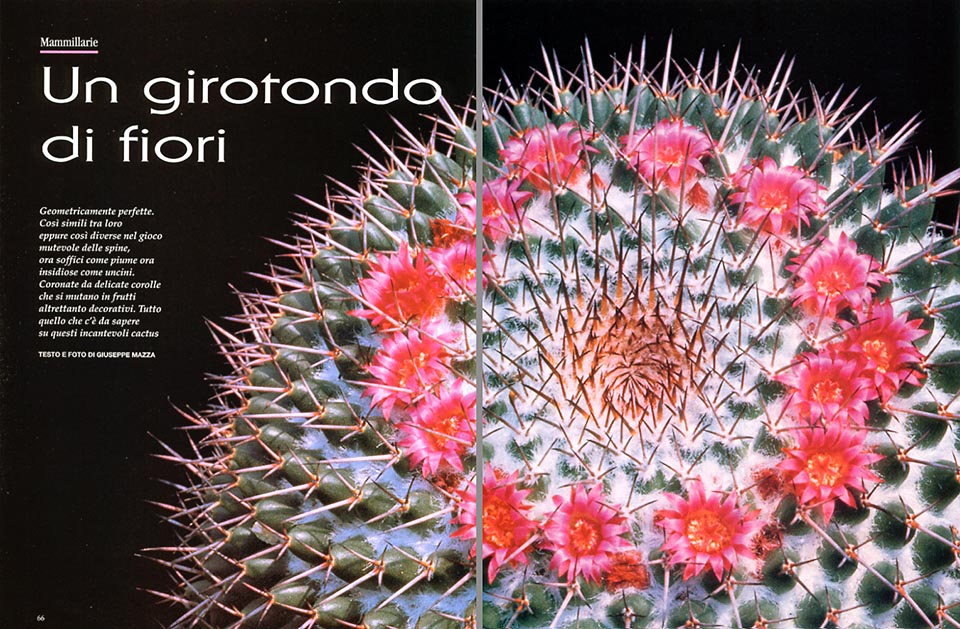 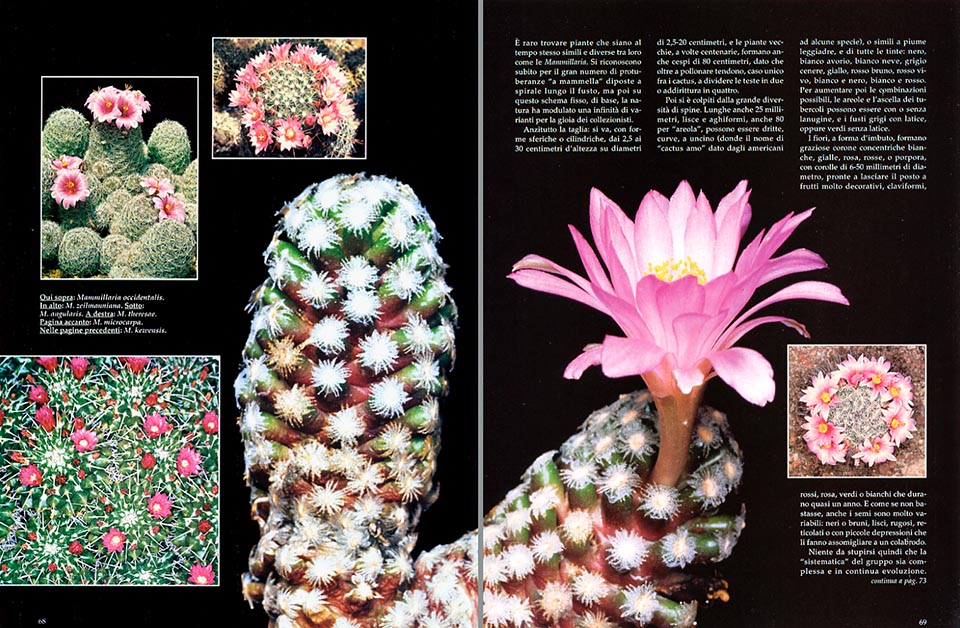 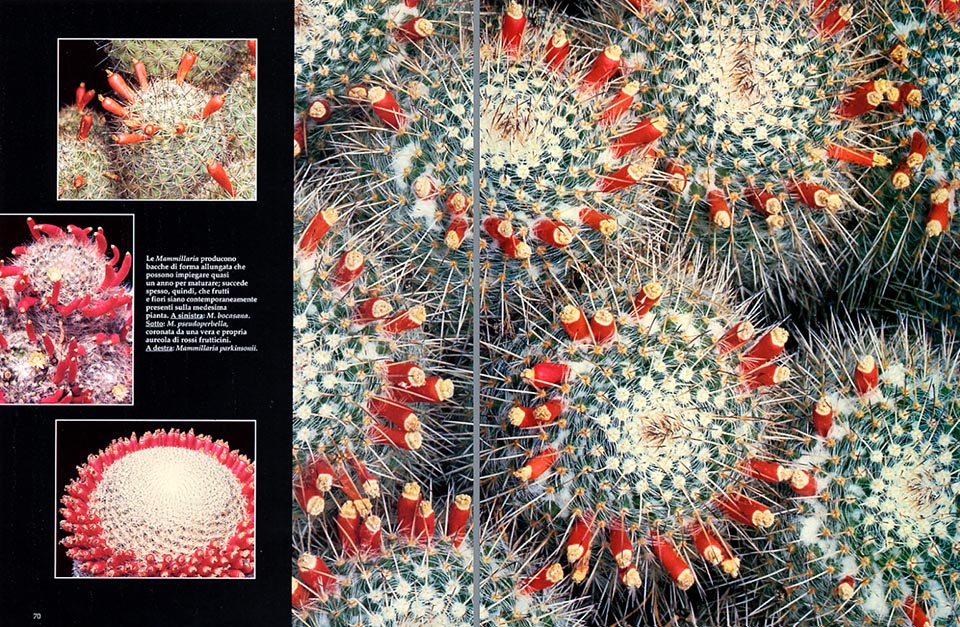 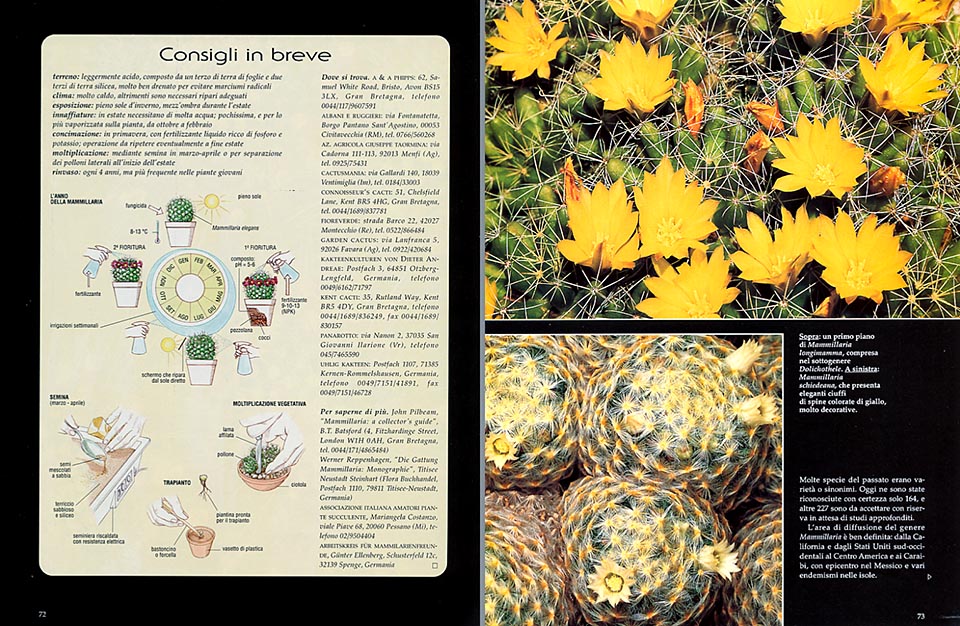 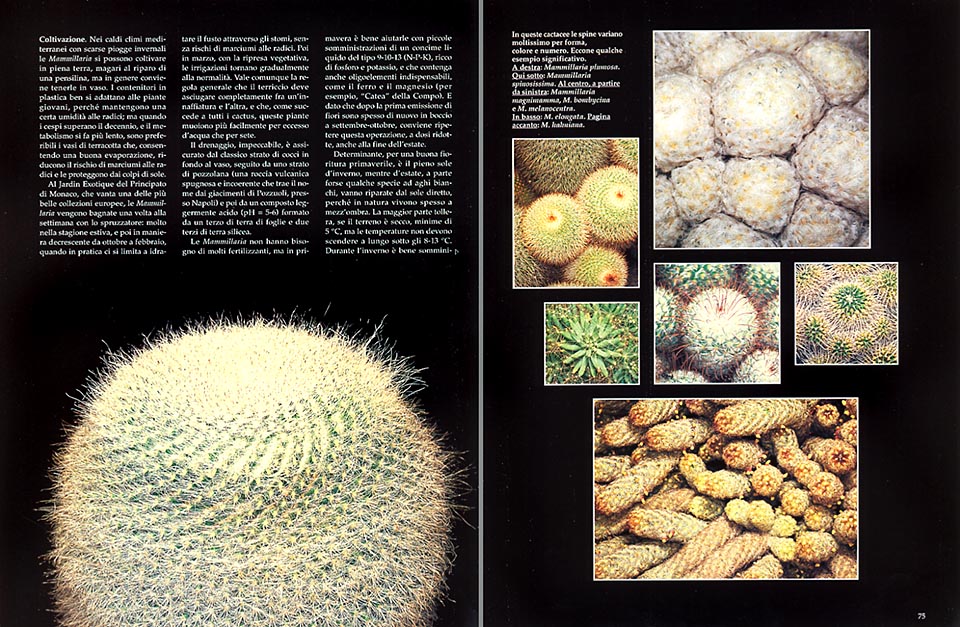 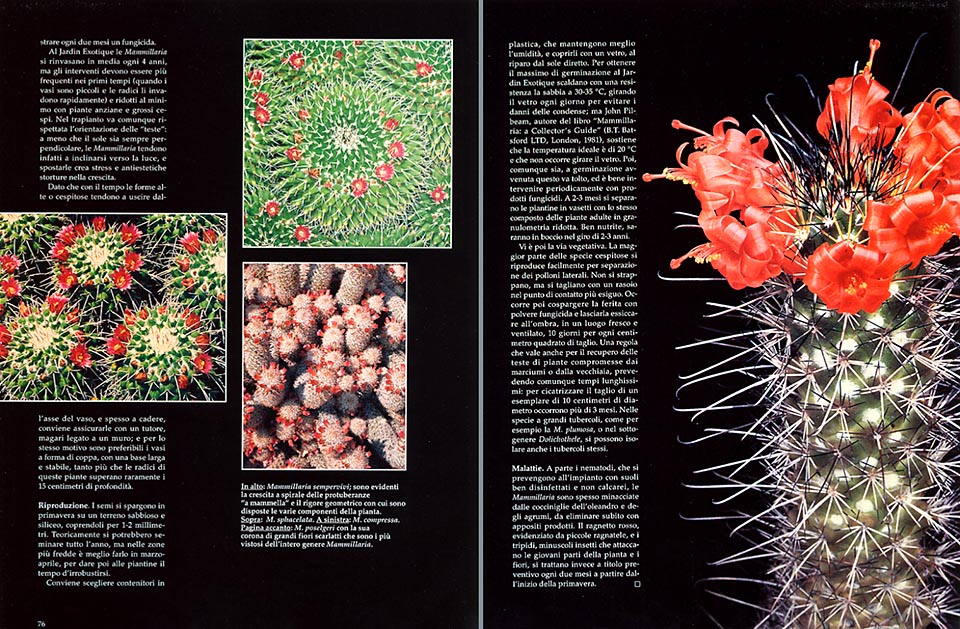 It is rare to find plants at the same time similar and different like the Mammillaria. They are recognized at once due to the huge number of breast-like protuberances placed spirally along the stem; but then, on this basic “fixed scheme”, the nature has modulated an infinity of variations for the joy of collectors.

First of all, the size: we go, with spherical or cylindrical forms, from the 2,5 cm to 30 cm of height, on diameters of 2,5 – 20 cm; and the old plants, sometimes centenarian, form even tufts of 80 cm, as, besides shooting, they tend, sole case for the cacti, to divide the heads into two or four.

Then, we are struck by the great diversity of the thorns. Long even 25 mm, smooth and needle-like, even 80 of them per “areola”, they can be straight, curved, hooked (whence, the name of “cactus amo”, given by the Americans to some species), or resembling to pretty feathers; and this in all the dyes of the soil: black, ivory white, snow-white, ash-grey, yellow, red-brown, bright red, white and black, and white and red.

And, to increase the possible combinations, the areolae and the axil of the tubercles can be with or without down; and the stems grey with latex, or green without same.

And, if this would not be enough, also the seeds are very changeable: black or brown, smooth or wrinkly, reticular or with small depressions like a colander.

Nothing of astonishing, then, if the systematics of the group is complicated and in continuous evolution. Many species of the past were varieties or synonyms. Nowadays, only 164 of them have been recognized with certainty, and other 227 are to be taken with reserve, awaiting deeper studies.

The diffusion area is, however, well definite, from California and south-western states of USA to Central America and the Caribbean, with epicentre in Mexico and several endemisms in the islands.

In the warm Mediterranean climates with scarce winter rains, the Mammillaria can be cultivated in the open land, better if at the shelter of a roof, but, usually, it is more convenient to keep them in pot.

Plastic containers are well suitable for the young plants, because they maintain a certain humidity to the roots; but when he tufts are more than ten years old, and the metabolism slows down, earthen pots are to be preferred, as, with their evaporation, they reduce the risk of rottenness to the roots and protect them from sun strokes.

In the Jardin Exotique of the Principality of Monaco, which has one of the most beautiful European collections, they water them once a week with the sprayer: much in summer, and then, in a decreasing way from October to February, when practically they confine themselves to hydrate the stem from the stomata, without any risk of rottenness for the roots.

Then, in March, with the vegetative resumption, the irrigations go back, gradually, to the normality.

In any case, it is in force the rule that the soil must dry up completely between the various watering, and that, like all cacti, these plants die more easily for excesses of water, rather than for thirst.

The drainage, faultless, is ensured by the classical layer of fragments of earthen ware, followed by a layer of pozzolana (a volcanic rock, spongy and incoherent, which originates the name from the layers of Pozzuoli, by Naples), and then by a compound slightly acid (pH = 5-6), formed by 1/3 of leaves soil, and 2/3 of a siliceous one.

The Mammillaria do not need many fertilizers, but in spring, it is good practice to help them with small administrations of a liquid manure, of the type 9/10/13, relatively rich of phosphorus and potassium, enriched by indispensable oligoelements, such as the iron and the magnesium.

And, as after March-June blooming they are again in bud by September-October, it is better to repeat this operation, with a reduced dosage, also by the end of summer.

Determinant, for a good crop of spring flowers, is the full sun, in winter; and apart perhaps some species with white needles, they must be sheltered, in summer, from the direct sun, because, in the wild, they live often in mid-shade situations, under the grass.

Most of them tolerate, if the soil is dry, low temperatures of 5 °C, but the temperatures must not go down for long time under 8-13 °C, and, in winter, it is good to administer a fungicide every two months.

At the Jardin Exotique, the Mammillaria are changed of pot every four years, on an average, but the interventions must be more frequent at the beginning, when the pots are small and the roots take possession quickly of the containers; and reduced to the least with elderly plants and big tufts.

In any case, while transplanting, we must respect the orientation of the “heads”.

Unless the sun is always perpendicular, the Mammillaria have the tendency to bend, in fact, towards the light, and to shift them creates stress and unaesthetic distortions in the growth.

Seeing that with the time the tall or tufty forms tend to get out from the axis of the pot, and, often, to fall down, it is better to ensure them with a support, possibly tied to a wall; and for the same reason, we have to prefer the pots formed as cups, with a wide and stable base, all the more so, because the roots of these plants rarely go deeper than 15 cm.

The seeds are to be scattered in spring on a sandy and siliceous soil, covering them for 1-2 mm. In theory, all the year should be good, but especially where it is cold, it is better March-April, in order to give, later on, the plants the time to grow up stronger.

It is a good thing to choose plastic containers, which keep better the humidity, and to cover them with a glass, and to the shelter from the direct sun.

In order to get the maximum of germination, in the Jardin Exotique they warm the sand with a resistor up to 30-35 °C, turning the glass each day to avoid damages caused by condensations, but John Pilbeam, author of the book MAMMILLARIA, A COLLECTOR’S GUIDE (B.T. Batsford Ltd. – London – 1981), asserts that the best temperature is of 20 °C, and that it is not necessary to turn the glass. Later on, in any case, once the germination has occurred, this is to be taken off, and it is good to intervene periodically, with fungicides.

When 2-3 months old, the small plants are to be separated in small pots with the same compound as for the adult plants in reduced granulometry. Well nourished, they will be in bud in 2-3 years of time.

Then, there is the vegetative way. Most tufty species reproduce easily by separation of the lateral scions.

They must not be pulled up, but must be cut with a razor in the minor point of contact. Then, we shall have to strew the wound with a fungicidal powder and to leave it drying up in the shade, in a cool and ventilated place, 10 days for each centimeter of cut.

A rule which applies also for the recovery of the heads of plants compromised by rottenness or by the advanced age, with very long timings, if we consider that for healing the 10 cm cut of a specimen, more than 3 months are necessary.

In the species with big tubercles, like the plumosa, or in the sub-genus Dolichothele, we can isolate also these last with the same proceeding.

Apart the nematodes, which can be prevented, at the installation, with well disinfected and not calcareous soils, the Mammillaria are often threatened by the scale insects of the oleander and of the citrus fruits, to be eliminated at once, as soon as they show themselves, with special products.

The red spider mite, the presence of which is revealed by small cobwebs, and the tripidae, small insects which attack the young parts of the plant and the flowers, are to be treated, on the contrary, as a prevention, every two months, starting from the beginning of spring, when they are more easily carried by the bees and other pollinators.

→ To appreciate the biodiversity within the family CACTACEAE please click here.

Mammillaria: cacti with “round dance” flowers and fruits was last modified: May 24th, 2019 by Giuseppe Mazza