The Mammillaria perbella Hildm. ex K. Schum. (1899) is native to central Mexico (states of Guanajuato, Hidalgo and Querétaro), where it grows between the 1600 and 2000 m of altitude in semi-desert areas characterized by warm-temperate dry climate and on mainly calcareous soils.

The name of the genus comes from the Latin “mamilla” = nipple, with reference to the tubercles present on these plants; the name of the species is the Latin word “perbella” = very beautiful.

Usually solitary plant, it produces new vegetations at the base only rarely, with the time it can tuft by dichomotic division, a characteristic which is common to other mammillarias.

It has a globose-depressed stem of a bluish green colour which in cultivation rarely exceeds the 6-8 cm of height, even if old wild specimens can reach the height of 16 cm with a diameter of 6-8 cm. It is provided of conical tubercles with milky lymph, about 5 mm long, thickly spirally placed, with areoles, both at the axils and at the apex, covered by white down, rather thick when young, so much to get the upper zone of the stem uniformly white. The apical areoles have 14-26 silky radial thorns, white, 2-4 mm long, and two more rigid central thorns, 4-6 mm long, the upper one being slightly longer, initially reddish, later tending to the white; the high number of radial thorns and the closeness of the tubercles renders its surface thickly covered by white thorns. 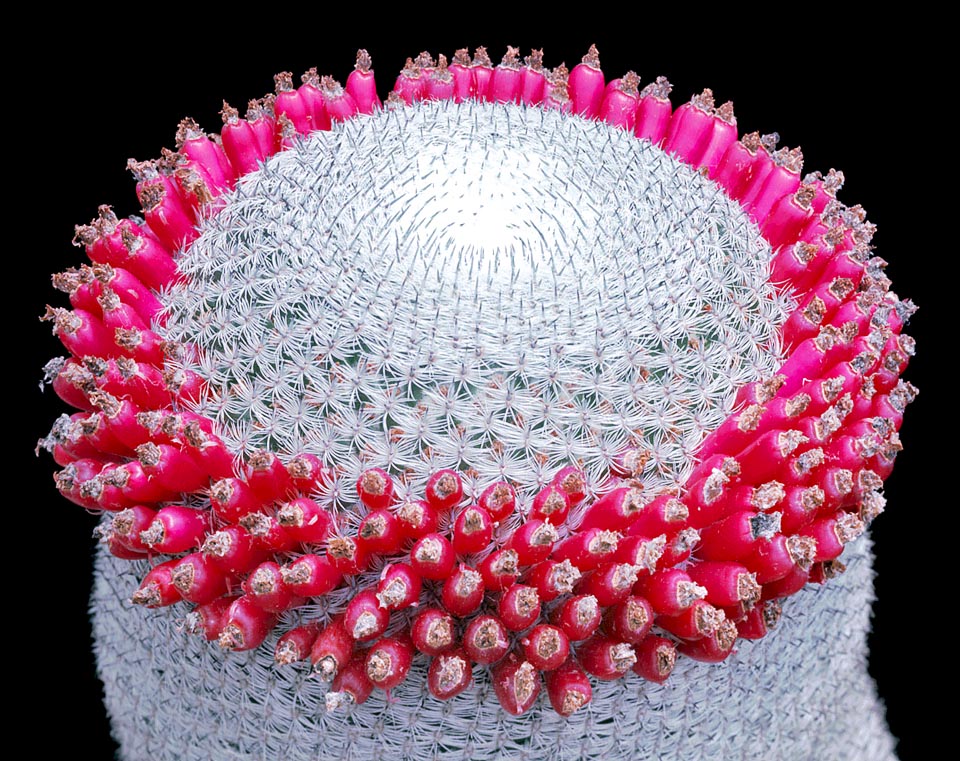 Mammillaria perbella fruits carousel. This species that grows at 1600-2000 m of altitude in central Mexico, in nature can be 16 cm tall with 6-8 cm of diameter. In cultivation has a globose-depressed look not more than 6-8 cm tall. Purple pink flowers, about 1 cm wide, with a more intense central band © Giuseppe Mazza

The flowers, circularly placed near to the apex, originate at the beginning of the vegetative period from the areoles at the axil of the tubercles, are funnel-shaped, of 1 cm of length and diameter, with purple pink lanceolate petals with a more intense central band. The claviform fruits are up to 1,5 cm long, red, and contain several brown pyriform seeds, 1 mm long.

Easy to cultivate plant with the characteristic short and thick thorns, to be cultivated in full sun, or slightly shaded, on particularly draining soils which may be formed for about the 50% by common garden manure earth and for the rest, in equal quantity, by sand (agriperlite) and crushed stone without dust. It is rather resistant to low temperatures, as it can stand, when dry and for short time, temperatures as low as -4°C; its best collocation in open air, is, when the climate allows so, in “desert” gardens together with other xerophytes, elsewhere, it is to be cultivated in pot at the some conditions stated before. In summer, during the vegetative period, it is to be regularly watered, but allowing the mould to dry up completely before giving water again, in winter it is to be kept dry, and, with rather low temperatures, but not lower than +5 °C, this resting period, cold and dry, is indispensable for getting a good blossoming by the vegetative revival.

The plant is inscribed into the appendix II of the CITES (plant for which the trade is ruled at international level).

Mammillaria perbella was last modified: May 8th, 2018 by Giuseppe Mazza