The Mammillaria polythele Mart. (1832) subsp. polythele is native to central Mexico (states of Guanajuato, Hidalgo and Querétaro), where it grows up to 2600 m of altitude un semi-desert areas characterized by temperate dry climate and prevailingly calcareous soils.

The name of the genus comes from the Latin “mammilla” = nipple, with reference to the tubercles present in these plants; the name of the species is the combination of the Greek words “polys” = much and “thele” = teat, with analogous reference.

Tufty plant with globose to cylindrical stems, with rounded apex, to about 40 cm high and 6-8 cm in diameter, of green-grey colour; it has 8-10 mm long, spirally placed, pyramidal tubercles, with little white lanugo persisting at their base.

The apical areolae of the tubercles, oval, initially covered by white down, are provided of 4-6 radial thorns, long 5-12 mm of reddish brown colour, darker on the tip, to almost black, which, with the time, becomes paler. 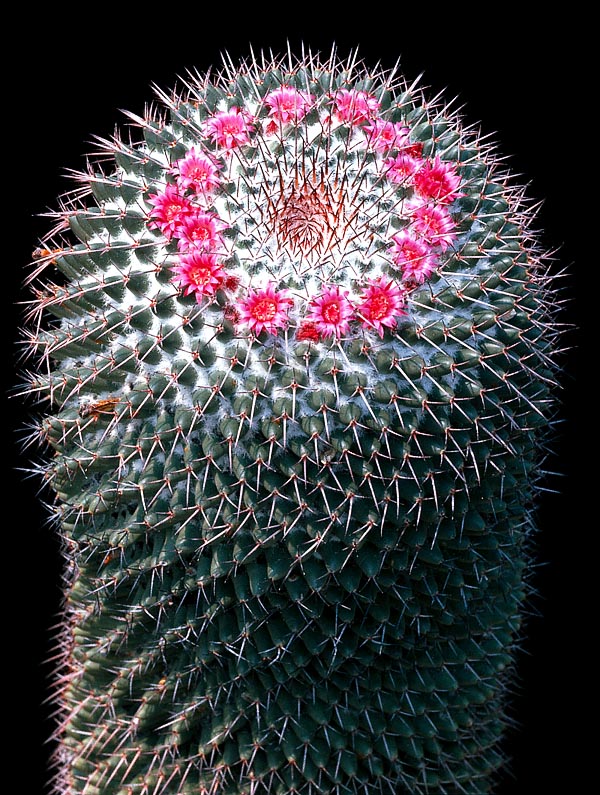 The bell-shaped flowers with the reddish-purple lanceolate petals, placed in circle close to the apex, are about 18 mm long and 12-15 mm broad and originate from the areolae at the base of the tubercles.

It reproduces by seed and division.

Other two subspecies are recognized:

Cactus spread in cultivation, of which are appreciated and sought-after the cultivars almost without thorns and lanugo, to be placed in full sun or slight shade, on particularly draining soils, which can be formed for about the 50% by common garden manure soil and for the rest, in equal quantity, by sand (or agriperlite) and crushed stone without dust.

Little resistant to the low temperatures, as it can stand, if dry and for short period, temperatures as low as -1°C; its best collocation in open air, where the climate allows it, is in the “desert” gardens together with other xerophytes, elsewhere it is to be cultivated in pot with the same modalities said before.

In summer, during the vegetative period, it is to be watered with regularity, but allowing the soil to dry up completely before giving water again, in winter, it is to be kept dry and when the temperatures are rather low, but not less then +5°C, this resting time, cold and dry, is indispensable for getting a good blossoming.

Mammillaria polythele was last modified: May 8th, 2018 by Giuseppe Mazza