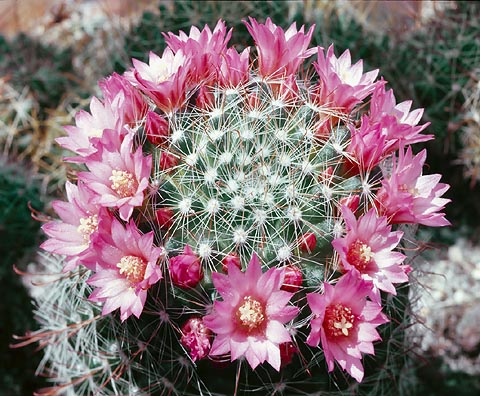 Modest size, easy to till and rich blooming. Ideal for beginners © Mazza

The Mammillaria zeilmanniana Boed. (1931) is native to central Mexico (state of Guanajuato), where it grows between the 1000 and 2000 m of altitude in semi-desert areas characterized by warm-temperate dry climate and on mainly calcareous soils.

The name of the genus comes from the Latin “mamilla” = nipple, with reference to the tubercles present on these plants; the species is honoured to the German collector Hans Zeilmann.

Solitary plant, or more frequently, tufty, with dark green stems, globose, tending to become almost cylindrical with the time, of 6-10 cm of height (up to 18 cm in old wild specimens) and of 4-6 cm of diameter.

It has ovoid or cylindrical, 6 mm long, tubercles with a diameter of 4 mm, spirally placed; the axillary areolae do not have any down, which, on the contrary, is present, but only when young, in the apical ones. These last have 15-18 white, thin and flexible radial thorns, long up to 10 mm, and 3-5 pale brown to brown red central thorns, long up to about 8 mm, one of which, vertical and little longer, is hooked. The flowers, placed in circle close to the apex, originate from the areolae at the base of the tubercles, are magenta coloured, bell-shaped, with a diameter of 1,8-2 cm and keep open for almost one week; the blossoming lasts the whole vegetative period long. There is also a variety with white flowers.

The club-shaped fruits are about 10 mm long, violaceous red, and contain several black seeds. It easily reproduces by seed and by division. It is one of the most popular plants, particularly suitable due to the facility of cultivation and the generous blossoming to those beginning to get fond of the cultivation of the cacti. Small, when tufting it quickly forms compact groups which, during the vegetative period cover of rather large flowers; it is very precocious, as it begins to blossom when it has only 1 cm of diameter. It is to be cultivated in full sun, or anyway at the maximum possible luminosity, on particularly draining soils, as it is rather sensitive to rottenness caused by excessive humidity, which can be formed by about the 50% of common garden manure soil and for the rest, in equal quantity, by sand (agriperlite) and crushed stones without dust.

It is rather resistant to low temperatures, as it can stand, if dry and for short period, temperatures as low as -4 °C; its best collocation in the open air, where the climate allows this, is in “desert” gardens together with other xerophytes, elsewhere, it is to be cultivated in pot with the same conditions stated before. In summer, during the vegetative period, it is to be regularly watered, but allowing the soil to dry up completely before giving water again, in winter, it is to be kept dry and with rather low temperatures, but not less then +6 °C, this resting time, cold and dry, is indispensable for a good blossoming.

The plant is inscribed into the appendix II of CITES (plant for which the trade is controlled at international level).

Mammillaria zeilmanniana was last modified: May 8th, 2018 by Giuseppe Mazza