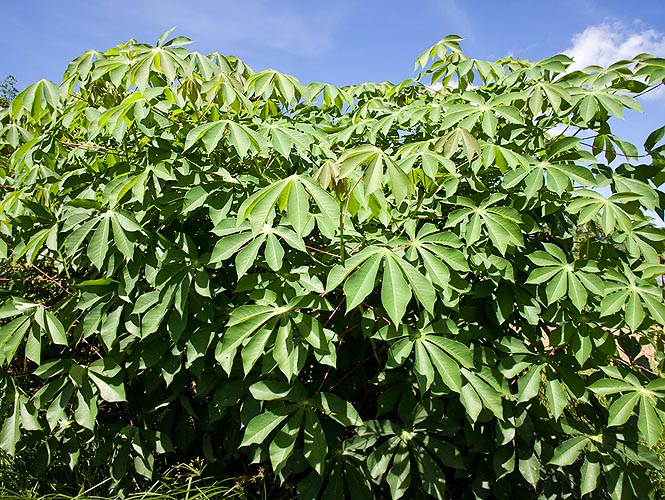 The name of the genus comes from the local name “manioc”; the name of the species is the Latin word “esculenta”= edible, eatable, with obvious reference.

The Manihot esculenta Crantz (1766) is a woody, perennial shrub, even if usually cultivated as annual, up to 1,5-5 m tall, with a smooth, often reddish, bark, but that of the young buds, which is of grey green colour, and tuberous roots, in groups of 4 to 8, up to about 60 cm long. The leaves, on a 5-20 cm long petiole, slightly peltate, are palmate, deeply etched with 3-9 lobes from elliptic to oblanceolate, 6-18 cm long and 1-4 cm broad, with entire margin and acuminate apex, of a dark green colour on the upper page, greyish on the lower one.

The inflorescences are in 5-10 cm long, terminal or axillary racemes with unisexual flowers, of various colours depending on the variety, from greenish yellow to orange red with purple venations, the female ones of about 10 mm of diameter, in reduced number at the base, the male ones, smaller, numerous, of about 5 mm of diameter, at the apex. On the same inflorescence, the female flowers open 1-2 weeks before the male ones (protogyny), but the fecundation may happen also through the pollen of the flowers of other inflorescences, seen that the flowering of the plant goes on for more than two months. The fruits are dehiscent (which spontaneously open when ripe) capsules, ellipsoidal, 15-18 mm long and 10-15 mm broad, longitudinally ran by 6 crests, containing three seeds. These ones are ellipsoidal, are about 10 mm long and have a pale grey colour, at times maculated.

It normally reproduces by cutting in order to maintain the characteristics of the variety; the reproduction by seed is utilized for the genetic improvement. The cuttings must have 4-5 nodes, with a length, therefore, of 20-30 cm, and are to be buried directly in the earth for about 1/3 of their length.

The cassava is one of the most important sources of food for millions of persons in the humid tropical and subtropical zones, in particular the African ones, due to the pureness and the elevated contents, 20-40%, of the starch contained in the tuberous roots, as well as of vitamins A and C, notwithstanding the high toxicity of some components which requires a proper treatment before the consumption; on the contrary, the contents of proteins is quite poor. 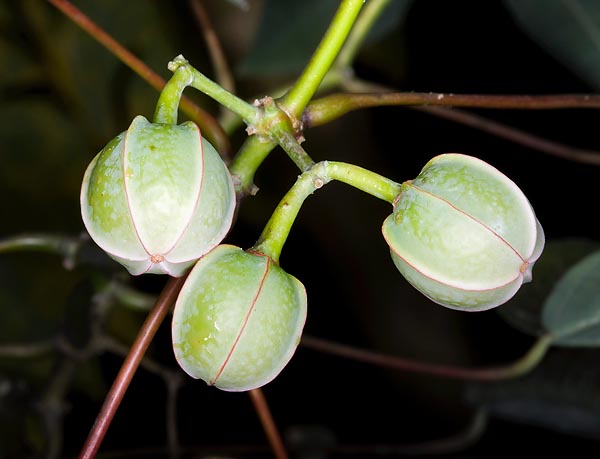 The cassava is also widely utilized in the animals feeding. The cassava toxicity is due to the presence of cyanogenic glucosides, mainly linamarin, and lotaustralin, which, when the cells break, with the intervention of and enzyme present in the same root, produce hydrocyanic acid (HCN), whose high toxicity is well known and which may be fatal even in small quantities.

The various cultivated varieties of cassava subdivide in two big groups, sour varieties, with high contents of hydrocyanic acid in the roots and which must be treated before the consumption, and sweet varieties, presently more cultivated, whose contents is lower and which might be consumed also when raw, but in any case after careful cooking, being higher the concentration of HCN in the brownish purple layer covering the root, but which usually are consumed cooked them too, as a precaution.

The processing of the sour varieties stands in the peeling for the above reason, and subsequent cooking which reduces of hydrocyanic acid to acceptable values.

In the event of boiling, the water is to be changed at least once and also the second water is to be eliminated. The natives of South America use washing and squeezing for a long time the roots in baskets until the toxic substances are eliminated. Also all the other parts of the plant, in particular the lymph and the leaves are particularly toxic.

The species, as told before, is vastly cultivated in the tropical and subtropical zones, in full sun or slight shade, and on an ample choice of soils, also poor, possibly humid, even if the plant may bear drought periods, but with a lower yield.

It may be cultivated also in the temperate zones, losing the aerial part when the temperature decreases to below the 0 °C, but vegetating again, in spring, from the roots; it has also a fairly good ornamental value due to its finely etched foliage.