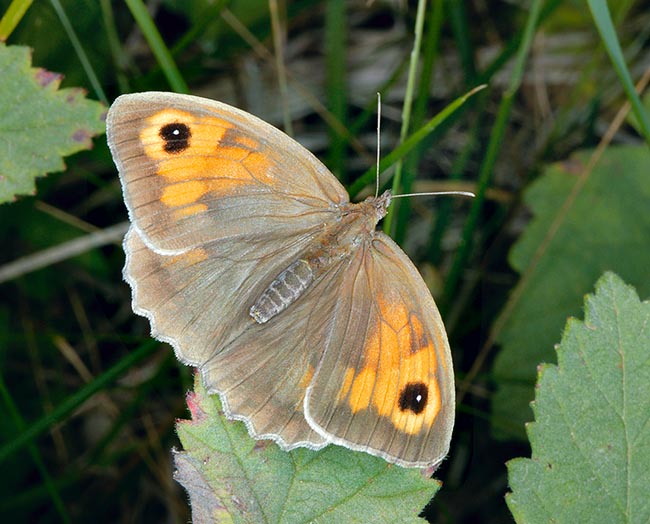 It’s a butterfly very common in the cool-temperate area and is invariably present on all flowered meadows especially those with rather high grass where the female easily finds a shelter. In fact, only the male is continuously active and is much more visible than the female that, usually, keeps crouched and camouflaged at the base of the grasses and moves only when looking for food or for the place where to spawn. The male can be seen hopping on the meadows in a continuous up and down at the relentless quest of the female.

As already said, this butterfly, the male in particular, has a rather monotonous and little attractive colour and this particularity has conditioned the etymology of its scientific name. The genus Maniola is a diminutive of “manes”, the soul of the dead; it would seem in fact that Schrank, the creator of this genus, thought to the mysterious Proserpina, the mythological queen of the underwold, referring to the quite dark and gloomy colour of this butterfly.

The species jurtina does not have any direct signification or reference with this butterfly. It is assumed that it can be a wrong transcription of Juturna, the name of a nymph who lived in a source close to Rome. It is interesting to know that Linnaeus at the first classification of this butterfly, considered the male and the female as members of two different species, calling the male janira, also a nymph, but of the Mediterranean Sea, and the female jurtina. They reached finally a unification of the species under the name of jurtina. 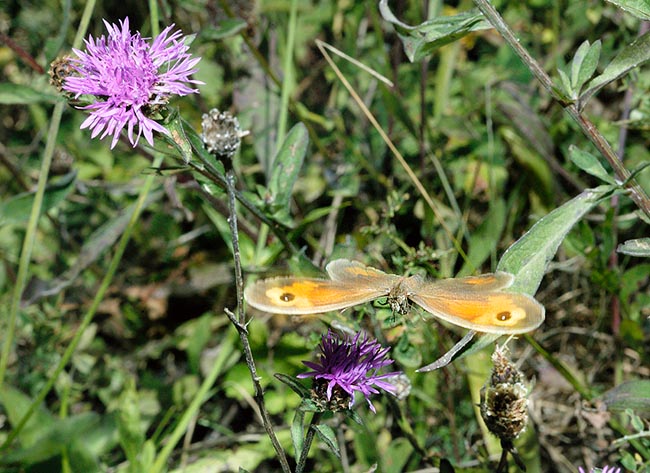 It awaits the male on the grass and in case of danger shows fleeing the ocelli confusing the predators © G. Mazza

The European common names reflect broadly the characteristic of its colour. In English, Meadow brown; in French, Myrtil; in Dutch, Bruin zandoogje; in German, Grosse Ochsenauge and in Spanish, Loba.

Species widely diffused in Europe, occupies, with some subspecies, a vast area that reaches up to cover most of Asia.

Its range penetrates the northern European regions thus reaching most of Scandinavian Peninsula, Russia up to southern Siberia up to touch China, then, going down, it covers the whole Middle East up to Iran.

It is not present in Africa and is rather occasional in southern Spain but reaches the Canaries.

It lives from the sea level up to 2000 m of altitude provided that the environmental conditions suitable to its necessities are present: a flowery and grassy meadow with cool-temperate climate. Despite being a much diffused butterfly, it is a species rather sedentary and its life takes place in very limited areas. It could be said, without any doubt, that it lives and passes away in the same meadow where it was born.

The assiduity to the native place is such that often we can see, after the mowing of the meadows it frequents, the continuous overflying of the same mown and missing of any attraction, as if waiting for the grass to grow up again. 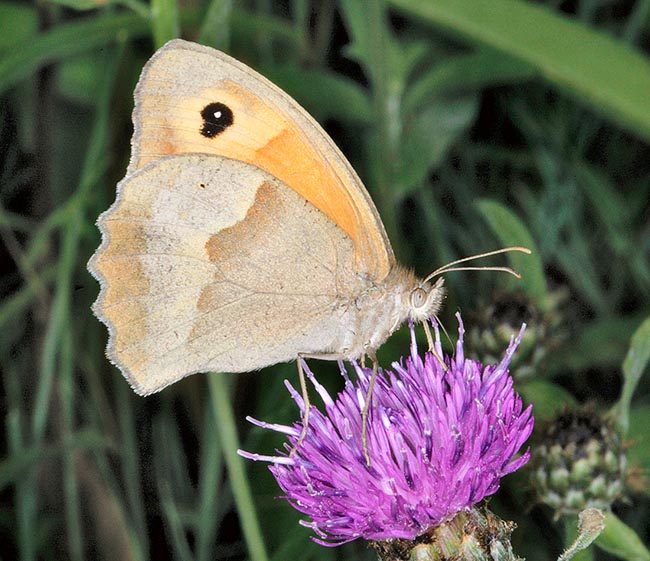 Bigger than the male, here shows the two merged black ocelli and an indented profile below © Giuseppe Mazza

The meadow brown is a medium-sized butterfly that may reach a wingspan of 60 mm.

It is an unattractive butterfly especially the male who has the upper faces of the wings totally dark brown with evident black androconial bands placed under the cell and crossing longitudinally the fore wings. On the fore apices it shows a black ocellus with white pupil, orange edged and immersed in a light, much suffused, paler brown nuance.

The female, markedly bigger than the male, shows instead on the right side of the fore wings a vast orange area covering almost totally the face and on the apex two black merged ocelli, with one or at times two white pupils. Conversely, the hind wings are dark brown as usual.

The lower face of the fore wings of both sexes is of a paler orange colour and faithfully reflects the ocelli placed on the upper face. The lower wing is in both sexes ochre brown with a paler post-discal and sub-marginal band in which appear usually two small black dots.

The antennae are stumpy and short, with terminal club. It seems that the ocelli of the female, much more marked and evident, may serve as deterrent or as distraction against possible aggressors when the same is crouched in the grass. As a matter of fact, when is discovered and before flying off, this butterfly suddenly opens the wings exhibiting for one moment this particular and quickly fleeing right after.

It is a butterfly that, when flying, may be mistaken with many others, among which Pyronia tithonus, Hyponephele lycaon, some species of the genus Coenonimpha and many Erebie but being easy to approach it does not create identification problems on the field. It much loves sucking the pollen of the scabious and the centaury but also that of the senecios, plumeless thistles, carline thistles and of the wild blackberry. 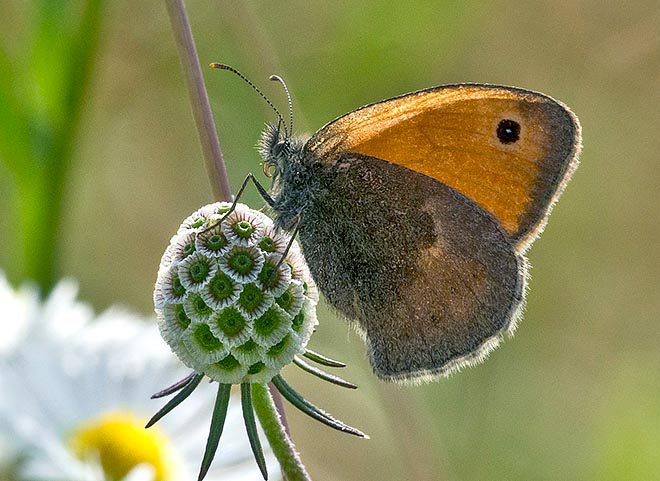 Male seen from side. It’s darker, only one ocellus and the second wings profile is just hinted © Gianfranco Colombo

In particularly favourable environ- ments and in optimal climatic situations, this butterfly has two generations per year. In the remainder of its range it is monovoltine.

The abundance of the host essences and the strong prolificacy are by sure the conditions placing this insect among those most diffused in our continent.

It is a quite late butterfly as visible from May up to late August but in these months it proceeds to continuous and progressive births that keep the area always frequented and densely populated. It is much prolific and may lay various hundreds of eggs that it leaves singly on the host plants. Sometimes, are found small “clusters” but it is thought that these are done by more butterflies or fruit of a later deposition of the same specimen. Like other Satyrins, often drops directly the eggs, while flying, on the host plants.

The greenish caterpillar is rather slow in the growth in particular in the summer generation, that which will spend the winter in the larval status hidden among the vegetal debris lying on the ground. It keeps always alert while eating and, by the least danger sign, lets itself fall to the ground hiding among the vegetation. The hibernating caterpillar resumes the growth by the late spring and when mature, after five moults, will give life to the first summer generation. The chrysalis is put at the foot of the host plant firmly anchored to the grass by means of a rear hook called cremaster. It is greenish, with a slight yellow dotting. It has an incubation period of 4 weeks depending on the climate and on the habitat situation. The host plants are of the genera Agrostis, Festuca, Poa and of many other herbaceous essences.