Marsupials : they wait for their second birth in mum’s pouch

They wait for their second birth in their mother’s pouch. The marsupials’ laborious system of becoming adults. Well-known animals and rare Australian species. 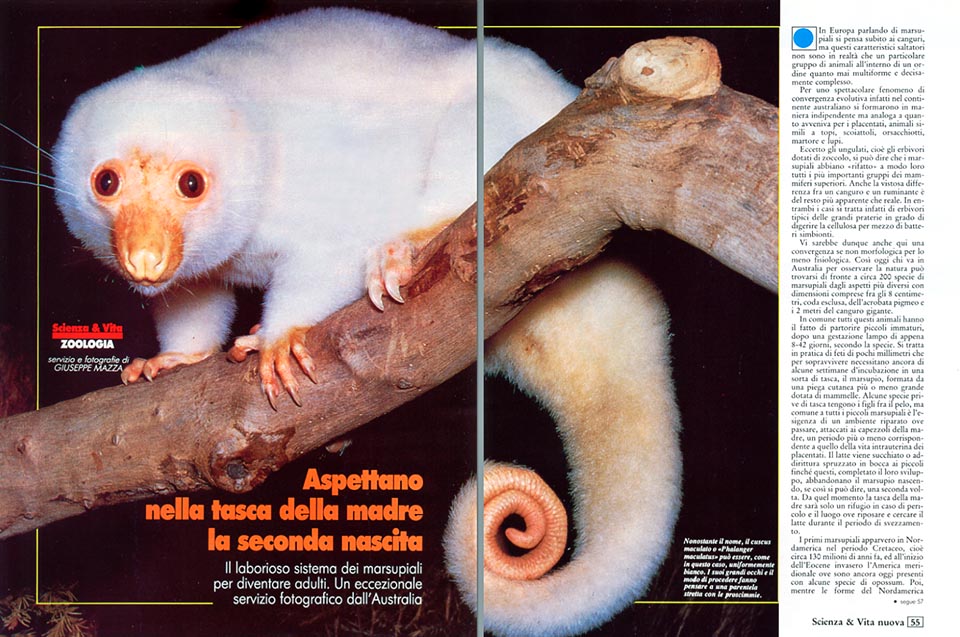 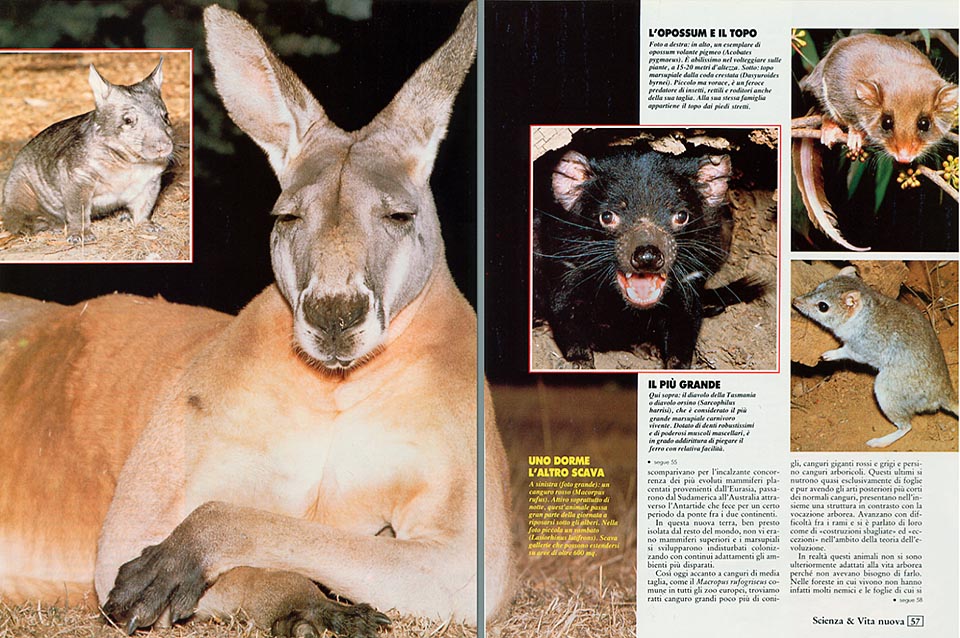 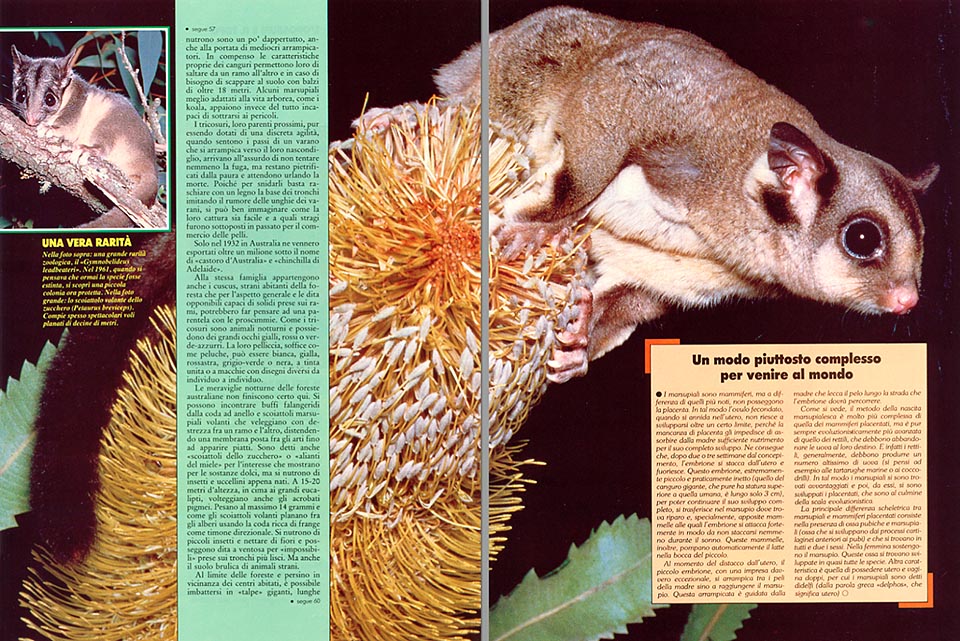 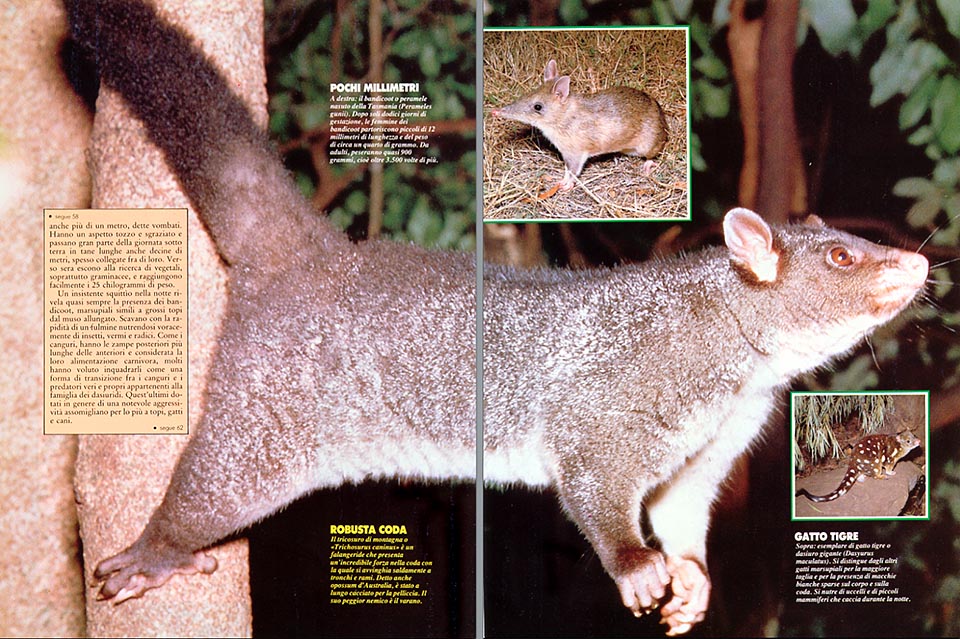 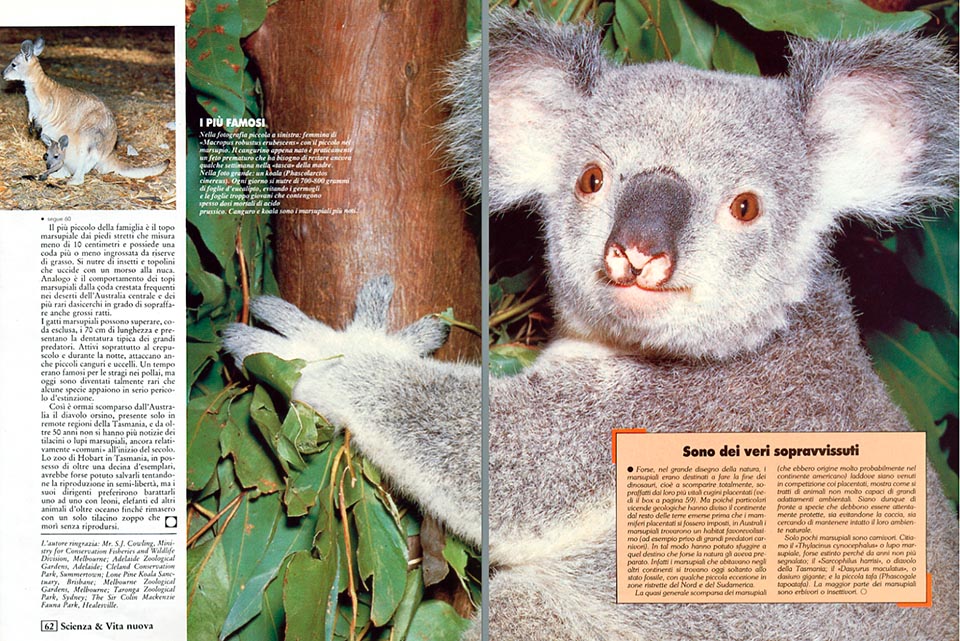 In Europe, when we talk about marsupials, we are immediately thinking to kangaroos, but these special jumpers are really just only one group of animals making part of a much wider category, very multiform and complex.

Due to a spectacular phenomenon of evolutional convergence, in fact, in the Australian continent, appeared in an independent, but analogous to what was happening for the placentate, manner, animals resembling to mice, squirrels, bear cubs, martens and wolves.

But ungulates, that is herbivores provided with hoofs, it can be said that marsupials have “remade”, in their own way, all most important groups of superior mammals.

Even the showy difference between a kangaroo and a ruminant, is, in fact, more apparent than real. In both cases, in fact, it’s matter of herbivores typical of the vast meadow-lands, able to digest the cellulose by means of symbiont bacteria.

There might be, therefore, also here a convergence, if not morphological, at least physiological.

So, nowadays, who goes to Australia for observing nature, can meet about 200 species of marsupials with the most different aspects, with sizes ranging from the 8 cm, tail excluded, of the feather tail glider, and the 2 metres of the giant kangaroo.

In common, all these animals have the fact of giving birth to premature young, after dashing gestations of only 8-42 days, depending on the species. Practically, they are foetuses of a few millimetres, which, to survive, need still some weeks of incubation on a sort of a pouch, the marsupium, formed by a more or less big fold of the skin, and provided of teats.

Some species, not provided of pouch, keep the young among the hair, but, common to all small marsupials, there is the need of a sheltered place where to spend, stuck to the nipples of the mother, a period more or less similar to the one of the intrauterine life of the placentate.

Milk is sucked or even sprayed into the mouth of young, till when these ones, their development completed, abandon the marsupium, coming to birth, if we can say so, for the second time. From that moment, the pouch of the mother will be only a shelter in case of danger, and the place where to rest and look for milk during the period of weaning.

The first marsupials appeared in North America during the Cretaceous, that is about 130 millions of years ago, and by the beginning of the Eocene, they invaded South America, where they are still present with a few species of opossum.

Then, while the North American forms were disappearing due to the pressing competition of the more evolved placentate mammals coming from Eurasia, they passed from South America to Australia, crossing the Antarctic regions, which, for a certain period of time, acted as a bridge between the two continents.

In this new land, soon isolated from the rest of the world, there were no superior mammals, and so, marsupials developed, undisturbed, colonizing the most various areas, with continuous adaptations.

So, today, close to average size kangaroos like the Macropus rufogriseus, common in all European zoos, we find rat kangaroos, just a little bigger than rabbits, red or grey giant kangaroos, and even arboreal kangaroos.

These last ones eat, almost exclusively, leaves and even if they have the back articulations shorter than normal kangaroos, in the whole, they have a structure which is in contrast with their arboreal vocation, they move with difficulty between the branches and it has been said that they are “wrong constructions”, and “exceptions”, for what evolution theory is concerned.

Really, these animals have not done any further modification to the arboreal life, because they did not need to do this. In the forests where they live, in fact, they do not have many enemies and the leaves they eat can be found everywhere, handy also for average climbers.

As a sort of compensation, the peculiar characteristics of kangaroos allow them to jump from a branch to another, and in case of need, to run away to the ground with jumps of more than 18 metres.

Some marsupials, better apt to arboreal life, like koalas, on the contrary, look absolutely unable to escape dangers.

The common brush tail possums, their close relatives, even if being provided of a discreet agility, when they hear the sound of the steps of a monitor lizard climbing towards their shelter, they reach the point of not even trying to run away, but remain there, petrified by terror, and wait, screaming, for death.

Seen that, to find them, it is sufficient to scratch with a piece of wood the basis of trunks, imitating the noise done by the nails of monitor lizards, we can easily imagine how catching them can be easy, and to which sort of slaughters they were subjected in the past, owing to the trade of skins.

Only in 1932, in Australia, more than a million of them were exported, under the names of “Australia Beaver”, and “Adelaide Chinchilla”.

To the same family belong also the Cuscus (Phalanger maculatus), odd inhabitants of the forest, which, for their general appearance, and the opposable fingers, capable of strong grasps on the branches, might induce to think to a relationship with the pro monkeys.

Like common brush tail possums, they are night animals, and have wide yellow, red, or green-blue eyes.

Their mantle, soft as a pelouche, can be white, yellow, reddish, grey-green, or black, with even colour, or dots with drawings which differ for each individual.

The nocturnal wonders of Australian forests, by sure, do not finish here. You can meet funny phalangers with a ring tail, and flying marsupial squirrels, which fly with ability from a branch to another, stretching out a membrane placed between the articulations, in such a way that they seem flat.

They are also called “Sugar squirrels”, or, “Honey gliders”, for the interest they show for sweet substances, but they eat also insects, and small, newly born, birds.

At a height of 15-20 metres, also feather tail gliders (Acrobates pygmaeus), are flying around on top of the big eucalypti, weighing no more than 14 grams and, glide, like flying squirrels, between the trees, using the tail, rich of fringes, as a directional helm.

They feed only on small insects and nectar of flowers, and they own cup-shaped fingers, useful for “impossible” grasps on the most smooth trunks. But, also on the soil there are strange animals swarming around.

At the border of the forests, and even close to peopled areas, it is possible to come across gigantic “moles”, even more than one metre long, called wombats. They have a stumpy and clumsy look, and spend most of the day underground in dens, long even tens of metres, often inter connected.

They go out about evening, looking for vegetables, especially poaceae, and reach easily the weight of 25 kilos.

At night, a persistent yelp almost always reveals the presence of the Bandicoots, marsupials which look like big mice, with an elongated muzzle. They dig with the rapidity of a lightning, feeding voraciously of insects, worms, and roots.

Like kangaroos, they have the back claws longer than the forelegs and, considering their carnivorous diet, many have decided to consider them as a form of transition between the kangaroos and the veritable predators, belonging to the family of the dasyures.

These last ones, generally endowed with a remarkable aggressiveness, resemble, for the most part, to mice, cats, and dogs.

The smallest of the family is the marsupial mouse with narrow feet, which is less than 10 cm long, and has a tail more or less enlarged by reserves of fat. It feeds of insect and small mice, killed with a bite on the nape.

Analogous is the behaviour of crested tail marsupial mice (Dasycercus cristicanda), frequent in the deserts of Central Australia, able to overcome even big rats.

Marsupial cats can surpass, tail excluded, the 70 cm of length, and exhibit the typical set of teeth of the big predators. Active mainly by the twilight and during the night time, they attack also small kangaroos and small birds. At a certain time, they were famous for the carnages in the hen-houses, but now they have become so much rare, that some species seem to be in serious risk of extinction.

Thus, it has by now disappeared from Australia the Ursine Devil, present only in remote regions of Tasmania, and since more of 50 years there are no more news of the thylacines, or marsupial wolves, still relatively “common” by the beginning of the century.

The zoo of Hobart, Tasmania, in possession of more than ten specimen, could have been maybe saved with trying to reproduce them in semi-liberty, but its managers did prefer to exchange them one by one with lions, elephants and other animals from across the ocean, till when only a limping one remained there, and he died without breeding.

Marsupials : they wait for their second birth in mum’s pouch was last modified: February 15th, 2020 by Giuseppe Mazza