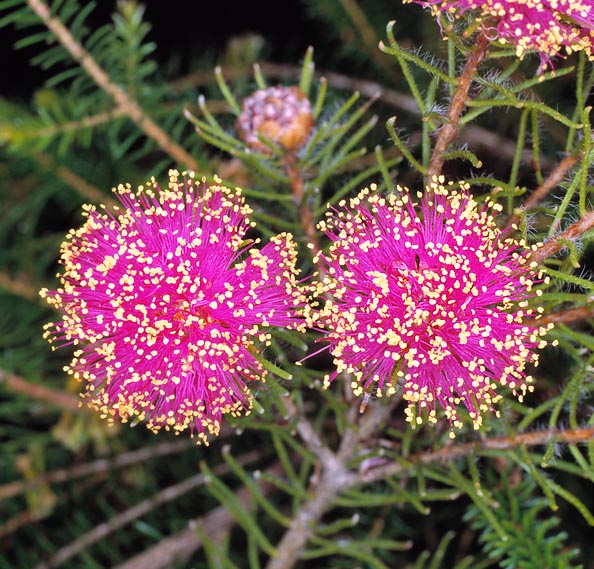 The Melaleuca trichophylla is an Australian shrub with a horticultural Mediterranean future © G. Mazza

This species is native to south-western Australia (Western Australia), where it lives on sandy or stony soils perfectly draining in zones characterized by sclerophyll vegetation and by a Mediterranean-type climate with humid and mild winters and dry and cool summers, with frequent fires which contribute in renewing the vegetation.

The Melaleuca trichophylla Lindl (1839) is an evergreen shrub, 0,2-1 m tall, with a rather variable posture, from prostrate to erect, with alternate, filiform, leaves, 2,5-3,5 cm long, arcuate, pointed, covered by thick hair.

The inflorescences are hemispheric, compact, terminal and axillary spikes, with woolly rachis and flowers with 5 sepals and petals hidden by a crowd of stamina, united at the base, of purple pink colour with yellow anthers. The fruits are globose capsules of 0,5 cm of diameter, containing tiny seeds.

It reproduces by seed, in sandy substratum, and by woody cutting in summer. It is a much ornamental species during the flowering period, but practically unknown outside the origin area where it grows in full sun on sandy or stony soils perfectly draining, from acidic to slightly alkaline, in purely Mediterranean-type climate with almost no rainfall in summer and mild, relatively rainy, winters, with temperatures which only exceptionally can go down to some degrees below 0 °C.

During the flowering time, it feeds a fair trade of cut flowers, collected directly in nature.

Melaleuca trichophylla was last modified: May 2nd, 2018 by Giuseppe Mazza